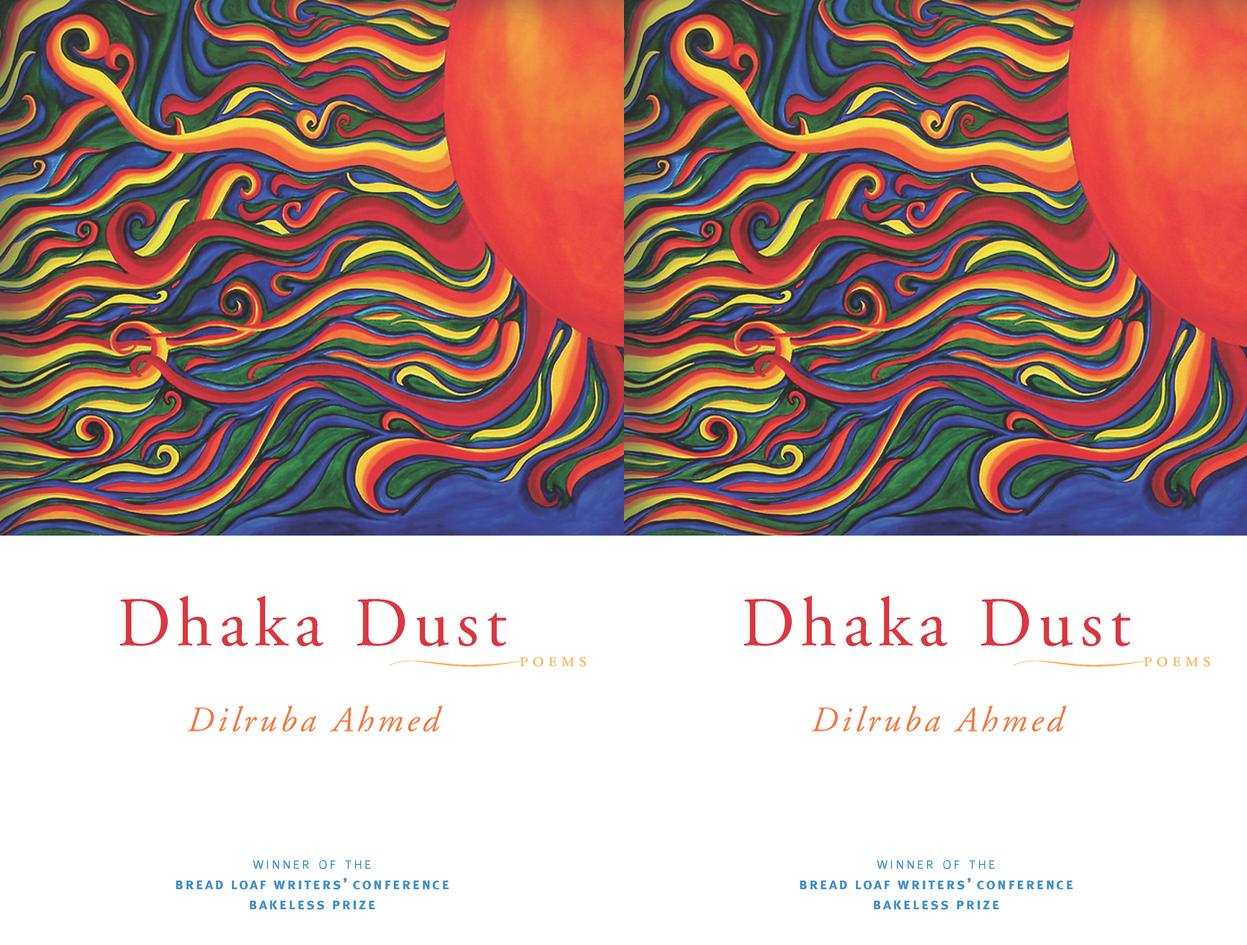 “Can’t occupy the same space at the same time,” begins the title poem of Dhaka Dust, Dilruba Ahmed’s impressive debut collection. And yet Ahmed’s work, situated across the Midwestern United States, Bangladesh, and Europe, often occupies more than one space at the same time; it rebels against physical borders, conflating places in the imagination. In “Small House,” for example, Ahmed visits her grandparents’ graves, where she sees and hears “open sky and the scattered light/ tones of a rickshaw.” Quickly, her mind travels to “land/ as flat as Ohio.”

These shifts in setting keep you on your toes, as does Ahmed’s ability to employ a range of poetic form—from ghazal to open-form to sonnet. Flip through the collection and you’ll notice some poems are tight on the page, while others spread across it like a stone skipping over water.

Still, the poems are unified, mingling in the book like particles of dust in perpetual movement, and illuminated by Ahmed’s careful attention to the physical. You could almost touch the objects she describes: her sister’s braid she clutches at night, “a bristled rope to keep/ me from the underworld”; the bangles she purchases at a Dhaka Bazaar that are “eased on with dabs of Vaseline” and described as glass coaxed over her skin. Through these objects, you experience the desire to reconcile separate pieces of identity, the parts of self that can’t occupy the same space at the same time.

While the desire is strong enough to provide moments of physical transcendence, the conflict—the disjunction of cultural, linguistic, and geographic identity—will never be fully resolved. In the tradition of Elizabeth Bishop, whose final lines from “Questions of Travel” appear as an epigraph to Dhaka Dust, Ahmed repeatedly brings you back to earth. In the end of “Small House,” she cannot remain in her imagination where her grandparents’ gravesite and Ohio co-exist. She must instead put her “cheek to grass and listen.”

The sensuousness of Ahmed’s poems and their glimpses of transcendence leave you both sated and hungry—compelled to revisit the poems and to try to wrap your fingers around them again and again.

Sarah Ehrich is currently an MFA candidate in poetry at Emerson College. She grew up in rural Vermont in a town with no traffic lights. After graduating from Brandeis University in 2005, she lived in France where she learned how to keep bees, make wine from walnuts, and express herself in another language.