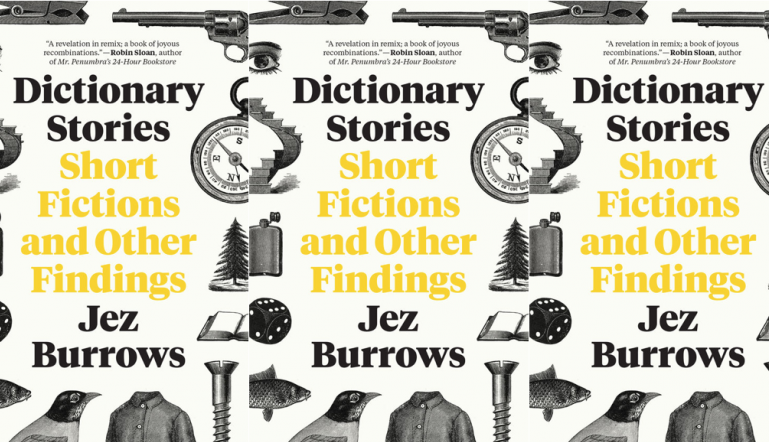 When consulting the dictionary for the meaning of a word, it’s not often that we stop to evaluate the literary quality of the example sentences. In Dictionary Stories, Jez Burrows elegantly reconsiders the examples meant to demonstrate the typical usage of a word by assembling them to construct short stories ranging in genre, length, and style. “Open this book to a random page and you could find yourself reading a noir thriller, a fantasy epic, a sci-fi romance, a family melodrama,” Burrows writes.

Dictionary Stories has an encyclopedic quality, with micro-stories that are experimental enough to give the form a much-needed refresh. “House White” in the Patience section consists solely of one sentence, the underlined signifying the words that sparked the original sentences: “He deliberated over the menu. Seventeen years later, he ordered a glass of Pinot Grigio.” This could be read as a straightforward narrative or a meditation on the ways that time is relative to the observer. Either way, the story is funny in a way that feels fresh when juxtaposed next to stories that range from menus to traditional narratives.

Burrows often eschews convention, writing stories that experiment with back-and-forth dialogue that has no identifiable speaker. “A Short British Argument” is a battle of wits between countrymen that uses English colloquialisms like “sling yer hook” to comedic effect. Lists are also validated as a form in “Instructions for Assembly,” a how-to guide to assembling furniture where Burrows admits, “You can’t hold yourself responsible for what happened.”

The introduction and compendium of the twelve dictionaries Burrows used to write Dictionary Stories reveals his methodology, which is by far the most interesting element of the collection. Burrows was first inspired to write micro-stories using example sentences when he encountered a dramatic sentence for the word “study” in the New Oxford American Dictionary. Following this discovery, Burrows admits to allowing bibliomancy, “a form of divination first recorded as early as the eighteenth century that treats sacred books like slot machines for spiritual guidance,” to steer his writing process.

As he continued to write, Burrows saw his stories as “largely full of short, disconnected, declarative sentences” that were “starting to sound like a robot attempting to emulate Hemingway.” Fortunately, the collection avoids such a fate: the introduction lists the allowances in punctuation, coordinating conjunctions, and other grammatical particles Burrows allowed himself to improve the overall quality of the stories. To make sure the example sentences preserved their integrity, “the sum of edits must constitute less than 5 percent of the final story.”

Dictionary Stories is sure to see its detractors. “Reviews Are In” makes a nod to reviewers who may not understand the full extent of the work by emulating the language of a highbrow critic: “The book is rather colorless, like its author. Jumps from one subject to another. Awkward writing, hollow characters, and leaden dialogue. Personally, I think it’s overrated.” Such a critic would not see that part of the beauty of Dictionary Stories is the truth that readers can have an experience that’s also guided by bibliomancy. Burrows arranges the collection alphabetically by themes from Quietude to Pizza so readers can have a serendipitous reading experience by either reading the book from cover to cover or flipping to any page.

In this sense, Burrows challenges our ideas of the writing process and unpacks our understanding of what is literary. Inherent to Dictionary Stories is the question of what makes an ideal sentence that best reveals the meaning of a word. It also makes us wonder what lexicographers were thinking when they created sentences like “She saw it in the rearview mirror: a headless corpse stood smack-dab in the middle of the road, hands unmoving at his sides.” Yet in a more complex way, Burrows also questions the purpose of dictionaries and how we use them today.

Instead of looking to the dictionary as a dry reference book, he reinvigorates the resource we take for granted by demonstrating the ways in which dictionaries are cultural documents, often with personalities of their own. One of Burrows’s stories includes sentences from a 1972 New York Times article, a John O’Hara novel, and a Tom Petty interview with Playboy. Because we are aware that Burrows uses so many dictionaries to arrive at his collection, it makes his implicit argument that dictionaries bias certain types of language particularly relevant in a time when terminology so long accepted is now being (deservedly) interrogated.

Still, the Mad Libs effect evoked by Dictionary Stories is sure to be memorable. Burrows’s illustrations reveal his whimsical approach to writing that’s not only fun but deeply rooted in internet culture, fitting because he first began publishing these stories online. But what’s sure to get the most attention is Burrows’s successful experimentation with language that leaves us with both beautiful sentences and gritty examples of what happens when writers juxtapose ideas we never thought could exist in the same space, demonstrating what’s possible.