Home
»
Interviews
»
“Digging out weapons in the arsenal of language” : An Interview with Meena Kandasamy 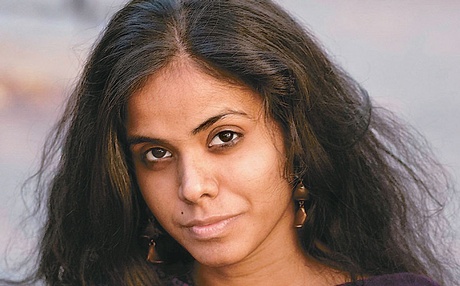 Meena Kandasamy is a writer based in India and London. She writes poetry and fiction, translates, and often uses social media to discuss issues of social justice. She describes her own work as maintaining “a focus on caste annihilation, linguistic identity and feminism.” She has published two collections of poetry: Touch and Ms Militancy. Her first novel, The Gypsy Goddess, was published by Atlantic Books (UK) and HarperCollins India in 2014.

The focus of this interview is a collection titled #ThisPoemWillProvokeYou. Kandasamy’s poems, as the title suggests, often rely on a direct relationship with the reader. In this interview, we discuss language, protest, translation, and the role of the poet in the world.

John Rufo: Your newest chapbook, #ThisPoemWillProvokeYou, features a bifurcation: two sections, the first titled “Love” and the second titled “War.” Could you speak a bit about the inability of language(s) to successfully communicate and/or deconstruct, to commit war and to commit love? I love the poems because you use them to speak of things that don’t exist—or don’t exist yet—and do this incredible act of pointing, accusing, undermining the status quo, flipping off the crimes and situations permeating everywhere today through gang-rape, discrimination towards Dalits, and the loss of lives.

​Meena Kandasamy: I do believe that languages are biased, fucked-up structures, clearly reflecting a lot of the status quo, reflecting the inequalities and very often reinforcing them. This does not mean that language does not contain the potential for revolution, or to serve as a call to arms. I’m with Toni Cade Bambara (who, to paraphrase very wildly) once said: “The role of the radical artist is to make the revolution irresistible.” I think language can be used to mask grave crimes (the language of United Nations reports, for instance), or to send across stereotypes, or even sometimes to denude us of all feeling, all outrage. Capitalism does this successfully—using happiness and beauty to sell—and to extend its interests without worrying about the imbalance and inequality. I think this one reason why the role of a poet becomes important—you are not only saying things but you are also digging out the weapons in the arsenal of language, you are reclaiming love, you are celebrating beauty.

Sometimes, because dialogue is impossible, and because some societies love to live in their silences and sweep all discussion under the carpet, language becomes the unarmed person’s first weapon of provocation, a provocation that will begin an argument, an argument that will expose weaknesses and mobilize people to take sides. I think it is perhaps romantic that a poet vests so much of her faith in language, but if one does not do that, where else can she learn to dream? ​

John Rufo: Another question on language: as far as I’m familiar with your work, it’s primarily written in English. You’ve also been writing—I believe—at Iowa and in other parts of the United States. Could you speak a bit about your use of language and how writing in English perhaps communicates with how you translate work from Tamil?

Meena Kandasamy: All of my work is written in English. Or rather, I write in English. I’ve written a lot of poetic text messages in Tamil when I was in love with a Tamil man, but that was many, many years ago. I still revert to using Tamil from time to time with all my lovers, even with those who never understand, because I find in it a comfort and intimacy and safety, a world where I’m sure of myself.

I was a fellow of the international writing program (IWP) at Iowa, which is a long writing residency where writers from around the world are hosted at the university of Iowa. The real teaching that I’ve done is a lot in India.

I learned a lot at Iowa, not from lessons, but from the friendship that I formed with writers from around the world. In some weird way, to enjoy the true internationalism of the writing community, you find yourself part of an American university. ​

John Rufo: Switching from the subject of geography to time: your work—both poetic and critical, whether as a poem or as a post on Facebook—is always continually geared on the now and the present moment. As I understand it, you’re disinterested in histories so far as they seem to contaminate the present—whether that’s concerning questions of caste, gender equality, and/or sexualities. When we talked briefly about your previous book, Ms. Militancy, you described that book as “very 2010″—do you feel your work is bound up, then, in the present moment or even the next moment? Do you write poetry in order to work through towards the future?

​Meena Kandasamy: That is your assumption, John. My novel is set in the year 1968, and the reason is not because I think history contaminates anyone; I, on the other hand, think that the lessons of 1968 in Tanjore mean that we need to learn a lot when we fight feudalism and caste and state repression today.

I meant Ms Militancy was a 2010 work, because I think I’ve evolved as a poet—I’ve not given up for what I want to stand for and shout about—just that I no longer write poems in the same theme that runs through Ms. Militancy —which is the specific retelling of Indian/Hindu/Tamil myths from a feminist perspective. ​

​My poetry is of the present moment though—the legend of Kama/Rati becomes the story of intercaste lovers facing honour killings (Facing the Music). ​

John Rufo: And in that poetry probing the present moment, you also use the list-poem as protest, as in “How to Make the Bitch Give Up Beef” and “This Poem Will Provoke You,” both of which do a work of negation—”This poem is a not a Hindu”—and calling down those who seek to prevent. Do you find that the list form takes on the multitude of issues contemporary India (and the world) faces? In other words, are you interested in a poetics of overwhelming an overwhelming world?

​Meena Kandasamy: One of the list poems was commissioned. I had to do a poem that would be later illustrated (see here: http://www.pen.org/graphic-narrative/how-make-bitch-give-beef ) and I thought the list is an interesting way of playing with the poem/graphic format. I think that the struggle is for an equal and a just and a socialist world and that is a clear, simple thing in itself, the repression that goes on, the distortions that surround things, the tools of oppression, the myths that are perpetuated to put people in their place, the divisive elements within society—these seem to grow and grow ​and these methods of splitting apart the coming together of people, these combinations of smokes and mirrors that distract us—perhaps they need to be peeled away, listed in their garbled, nonsensical totality, in order to expose the heart of oppression that lies within our society.