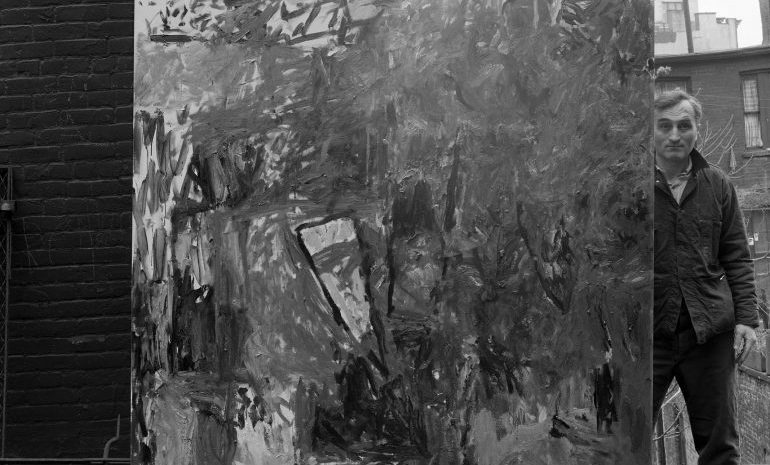 Milton Resnick (1917—2004), was one of the most articulate and interesting of the abstract expressionists. I knew his work, but this past summer I discovered his personal history through a recently completed manuscript, Milton Resnick: Painter in the Age of Painting, by Geoffrey Dorfman, author of the well-received, Out of the Picture: Milton Resnick and the New York School. The narrative contains transcriptions of interviews about the lives of artists of that period. Dorfman’s and Resnick’s sensibilities complement each other perfectly. As Dorfman notes, “There are two voices running through this book: the artist’s and my own.” And the wisdom found here teaches lessons that apply across all the arts.

Resnick was an indefatigable artist, leaving behind ten thousand works on paper and canvas. His paintings are held in the Smithsonian, the National Gallery, the Museum of Modern Art, and the Whitney Museum of American Art, among others. He was also an energetic storyteller, relating anecdotes about those he knew, including Willem De Kooning, Franz Kline, Arshile Gorky and Jackson Pollock. Even his stories about painters who failed or disappeared are riveting. Resnick always keeps his focus on how art is made, what an artist must do to survive, and the struggle to maintain integrity.

What I love about this book is the humor and wit that runs through even the most dire accounts. Dorfman’s record of Resnick’s life is far from hagiography—after all, Dorfman knew Resnick well, and incorporates his failures as well as his triumphs. For instance, Resnick, we learn, “was certainly no art teacher.” One of his painter friends said, “Whenever I brought a problem to Milton, he made it vaster.”

And yet he was a great teacher in many respects, although it might not have been in a studio or classroom. This is what he said about older artists who have perfected their technique:

“They begin to be too good, too capable—too technically able—to do whatever it is they’re doing. Then their technique eliminates them from falling to the bottom of the pit. Enduring pain can be avoided altogether. They have acquired the technique that keeps them from suffering. At that point, a funny thing happens: they’re no longer good artists. It happens to almost everybody. When they get to be old, a very few can escape it.”

He then points to Rembrandt as one who didn’t let his experience detract from his accomplishments.

Two other moments in this book also caught my attention. While a young man working as an elevator operator at the American Artists School where he was also a student, Resnick noticed the painter and teacher, Francis Criss, among his passengers. On impulse, he asked Criss to take a look at a painting he was having trouble finishing. Dorfman writes,

“Criss, peering intently, said, ‘That’s the problem, right there,’ and pointed to the spot Milton liked best, the sole part he had kept from the beginning.” Resnick said, “When I painted that spot out I could then see my picture.”

Dorfman records this as Resnick’s “first real art lesson,” where he learned not to “hold onto anything; the parts that at first seem best, soon enough become ballast. They hold you down.”

The other instance involves Resnick and de Kooning sitting in Washington Square Park, discussing a new show of paintings by Arshile Gorky which they admired. Resnick says, “They were not like the Gorkys you usually see. It wasn’t like drawing … it was very different and the lines seem to float in a very beautiful way, very sparse.” As they talked, Gorky happened to walk by. They told him how much they liked this new work. He said, “You know, those paintings—at the very moment I was going to make a line somewhere, I put it somewhere else. That made all the difference.” Dorfman puts the story into an historical context and then interprets what it means to put the line “somewhere else.” He says that Gorky was “toying with the ‘disobedient’ mark … a wrong move that might open up a new set of unanticipated possibilities.” This lesson can also be applied to writing, when the writer reaches a point where he has become too comfortable with past strategies that had once served him well. Violating them can result in a real breakthrough—and so a wrong step might lead to the right direction.

Throughout Milton Resnick: Painter in the Age of Painting, such stories overlap and interchange, and I read the book finding numerous literary counterparts to the painterly world.

Resnick’s observation on the artist also fits the writer:

John Skoyles is the poetry editor of Ploughshares and the author of four books of poems, A Little Faith; Permanent Change; Definition of the Soul and The Situation, all from Carnegie-Mellon University Press which will publish his New & Selected Poems in 2016. He is also the author of a book of personal essays, Generous Strangers; a memoir, Secret Frequencies: A New York Education; and the recently published A Moveable Famine: A Life in Poetry. He teaches at Emerson College.