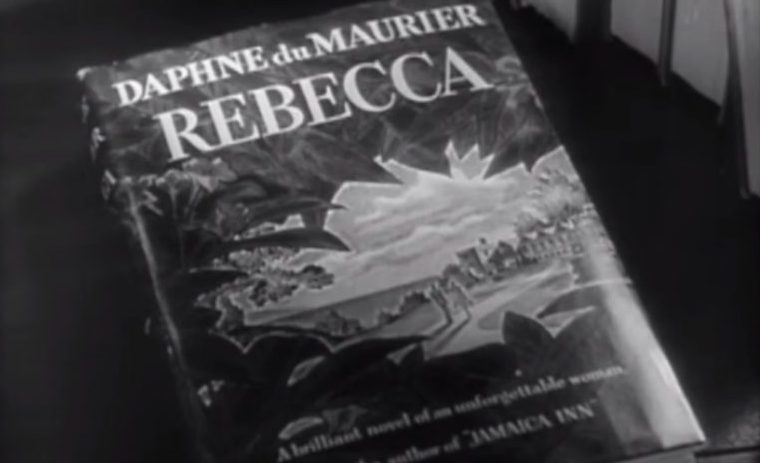 I don’t know what it is about summer, but it’s around now every year that I catch myself actively seeking stories that will make me feel awful. It’s the heat, maybe, or the mosquito bites—I want to wallow. First, I watched this summer’s exquisite and excruciating Midsommar and that, in turn, reminded me of a different dance through the queasy pastures of relationship-anxiety–as–horror. So, I started re-reading Rebecca and marveling, again, at Daphne du Maurier’s alchemy of physical comfort and psychological unpleasantness. A master of suspense, du Maurier’s highest skill lies in finding the latent dread in mundane domestic moments.

In Rebecca, a twenty-one-year-old woman comes to live in the grand and famous English estate of Manderley as the second wife of Maximilian “Maxim” de Winter. At the time of the narrator’s marriage, Maxim’s first wife (Rebecca) has been dead about a year, drowned in a sailing accident. Maxim appears to be, by the unnamed narrator’s admittedly inexperienced standards, a kind man and good lover, but she’s only known him for a space of a few months. She expects, naively, to live out her days in leisure and affection but quickly discovers that the household staff is judging her low class and uncertainty around the estate. Obsessed by the memory of the self-assured and capable Rebecca that everyone and everything in the house—including her new husband—seems to hold, the narrator slowly loses her sense of self.

There is a scene early on in the book that has always struck me for the way it begins in comfort and dissolves into exactly the opposite—a perfect miniature of du Maurier’s larger designs for the novel. In this scene, the marriage, and the haunting, is in its early stages:

He did not look at me, he went on reading his paper, contented, comfortable, having assumed his way of living, the master of his house. And as I sat there, brooding, my chin in my hands, fondling the soft ears of one of the spaniels, it came to me that I was not the first one to lounge in possession of the chair, someone had been before me, had surely left an imprint of her person on the cushions, and on the arm where her hand had rested. Another one had poured the coffee from that same silver coffee pot, had placed the cup to her lips, had bent down to the dog, even as I was doing.

How does this paragraph move us from calm to paranoid? First, Du Maurier wrong-foots the reader and lends tension to the scene by contrasting comfort with discomfort—Maxim feels at home and the narrator does not. What’s worse, Maxim, her only ally in the situation, doesn’t even realize that she isn’t comfortable. Is it possible that he doesn’t care? The domestic comfort that would suggest itself to someone looking at this scene is unseated by a glimpse into the mind of our isolated narrator, and we, stuck there, feel isolated as well.

On the sentence level, du Maurier achieves the momentum of suspense primarily with long, many-claused stretches like “And as I sat there, brooding…fondling the soft ears…it came to me…someone had…had surely….and on the arm where her hand had rested.” That particular sentence—and there are many others like it in the novel—is shaped like a step rising from low to high energy with a steep rise in the middle that comes from a sudden realization on the part of the narrator that causes her to reevaluate the objects around her with a sense of dread. This creepy double-take is a favorite device of du Maurier’s.

The entire passage, in fact, amounts to something of a jump scare. The narrator begins with a something that should bring comfort—rubbing the soft ears of a dog—but at the end of the following paragraph, she looks down to realize that the dog she has been petting, her sole source of physical comfort in the room, has come to her only because she has reminded it of Rebecca: “Unconsciously, I shivered as though someone had opened the door behind me, and let a draught into the room. I was sitting in Rebecca’s chair, I was leaning against Rebecca’s cushion, and the dog had come to me and laid his head upon my knee because that had been his custom, and he remembered, in the past, she had given him sugar there.”

By the end of this second paragraph, it is unnecessary for du Maurier to have written that the narrator shivered—it’s difficult to get to the end and not do so yourself. Besides having that nice recoiling effect, the dog scare marks the passage of the haunting from existing at an inanimate level—the memory of Rebecca imprinted in cushions, in the coffee pot—to the infinitely more terrifying animate one—the memory of Rebecca being alive in the dog’s mind (and, by extension, her husband’s). This leap from inanimate to animate is essentially the jump from death to life—a time-honored tactic of horror.

There is a nice ghostly effect, too, in the last lines of that first paragraph, where du Maurier tells us that Rebecca used to lean down and pet the dog, just as the narrator is doing now. The choice to end on the phrase “even as I was doing” allows a superimposition of the narrator directly over that half-memory of Rebecca which we have just been watching. It is a sudden flash between the two of them that robs the narrator of specificity and agency—qualities which we already know the narrator fears that she lacks. The visual effect of this is cinematic: Rebecca fades out and the narrator fades in, and the thematic effect is a pervading sense of doom.

Having introduced this transformation at the sentence level, du Maurier goes on to mirror it at the chapter level, with climactic results. During a costume party held at Manderley, the narrator unintentionally wears the same outfit that Rebecca had at a party just before her death. The narrator is unwitting, but it’s hardly an accident—the cruel and grief-stricken Mrs. Danvers, maid and lifelong companion to Rebecca, manipulates her into choosing the costume. When Maxim sees his second wife dressed as his first, he goes from mildly brooding to furious, first lashing out at and then refusing to speak to the narrator. She is devastated. With no other relationships to lean on—she is an orphan and friendless—she saw Maxim as her last hope for human connection. Thinking that he despises her, finally convinced he has only ever loved Rebecca, she does the only thing that seems appropriate: at Mrs. Danvers’ urging, she prepares to throw herself out a window.

This moment, following the second Mrs. de Winter’s final transformation into the ghost-image of her husband’s first relationship, represents the apex of suspense for the plot: as she is about to leap, she’s stopped by the sound of signal rockets at the nearby bay. From here, we quickly learn that a body has been found, that it is Rebecca’s, and, after more brooding and a confession, that her death a year ago was not a sailing accident. Maxim had, in fact, shot her in a rage after she bragged about being pregnant by one of her numerous affairs. It’s here that we pass from suspense into the true horror of Rebecca: we have been so transported into the narrator’s perspective that we feel relief when we realize what Mr. de Winter has done and when he goes unpunished. We are relieved to learn that Rebecca was a psychopathic adulterer. Maxim does love our girl, after all! We leap willingly from the suspense of so much uncertainty but land hard, finally, on that horrifying equation: that the need for human connection can drive us to accept the unacceptable. The novel ends, as so many stories do, with a building on fire. Manderley is consumed by the flames of pyrrhic wish fulfillment, and the narrator believes that “The house was a sepulchre, our fear and suffering lay buried in the ruins. There would be no resurrection.” We let ourselves believe it, too.