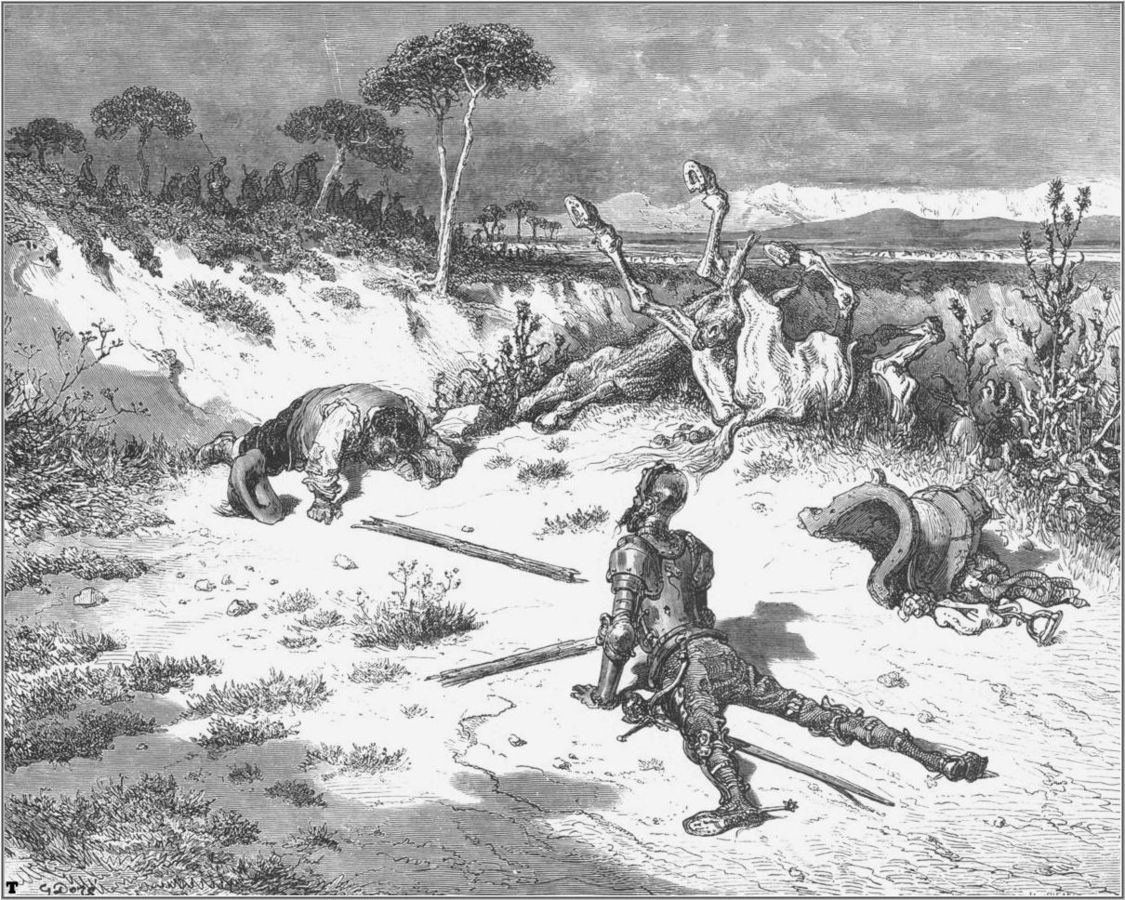 My high school’s production of Man of La Mancha introduced me to the character of Don Quixote, the dreamer of impossible dreams whose main achievement is to encourage the serving woman and part-time prostitute Aldonza to see herself as the lady Dulcinea. Never mind that such a change in her view of herself does nothing to protect Aldonza from the predations of violent men; in the end, the musical unironically celebrates the idealism of Don Quixote. An idealist myself at the time, I was inspired.

When I first read Don Quixote as a college freshman, its satiric plot and tone surprised me. The Don Quixote I encountered in the novel by Cervantes is quite different from Don Quixote as he is portrayed both in the musical and more generally in the popular imagination—a fool admirable for his idealism and noble intentions. In the novel by Cervantes, not only is Don Quixote a bad reader whose “brains got so dry that he lost his wits,” but he is also full of rage, armed, and violent. Again and again his story shows that idealism untethered from reality leads to nothing but real harm, and I find in it a cautionary tale for our age, in which misinformation and conspiracy theories proliferate.

One might initially sympathize with Don Quixote’s plight. About fifty years old, unmarried and childless, a gentleman with a small income, few responsibilities, and little prestige living in the middle of nowhere, Don Quixote suffers the great misfortune of boredom. It is therefore no wonder that, as the narrator tells us, Don Quixote “whenever he was at leisure (which was mostly all the year around) gave himself up to reading books of chivalry with such ardour and avidity that he almost entirely neglected the pursuit of his field-sports, and even the management of his property.” The result of all this reading, we are told, is that “it so possessed his mind that the whole fabric of invention and fancy he read of was true, that to him no history in the world had more reality in it.”

Don Quixote’s inability to distinguish between fiction and nonfiction, extends, of course, beyond books to reality itself. He believes not just that the tales of chivalry (akin to today’s comic books) tell accurate histories, but that the events and actors in his world of Counter-Reformation Spain should conform to the conventions of those tales. And so he outfits himself—provisionally, and badly—as a knight, leaving his home in search of adventure. Outlandish and obviously deranged, he is an easy target of cruel jokes. His delusions, however, do not result in harm only to himself.

His first act after being dubbed a knight, for example, is to intervene in the beating of the youth Andres by his employer—a farmer who, Don Quixote discovers, has not paid any of the wages owed to Andres for nine months. Commanding the farmer to pay Andres, Don Quixote declares, “And if you desire to know who it is lays this command upon you, that you be more firmly bound to obey it, know that I am the valorous Don Quixote of La Mancha, the undoer of wrongs and injustices; and so, God be with you, and keep in mind what you have promised and sworn under those penalties that have been already declared to you.” After making this grandiose proclamation, he leaves, considering his job done—and the result is that Andres receives an even more brutal flogging by his enraged employer.

This pattern repeats itself throughout the novel. In the name of undoing wrongs and injustices, Don Quixote mainly kills sheep, destroys puppets, lets criminals loose, knocks innocent men unconscious, bloodies others, and breaks the leg of Alonzo Lopez, who had been escorting a body to be buried in Segovia. In response to Don Quixote’s claim that “it is my business and calling to roam the world righting wrongs and redressing injuries,” Lopez replies, “I do not know how that about righting wrongs can be, for from straight you have made me crooked, leaving me with a broken leg that will never see itself straight again all the days of its life; and the injury you have redressed in my case has been to leave me injured in such a way that I shall remain injured for ever; and the height of misadventure it was to fall in with you who go in search of adventures.” Unfazed, Don Quixote blames the victim for his own folly, telling Alonzo Lopez that the attack was the result of his “going, as you did, by night, dressed in those surplices, with lighted torches, praying, covered with mourning, so that naturally you looked like something evil and of the other world; and so I could not avoid doing my duty in attacking you.”

Despite the violence of his deeds, Don Quixote gets credit from many of his readers. In “Don Quixote or the Critique of Reading,” published in the Wilson Quarterly in 1997, Carlos Fuentes writes, “His conception of love and justice saves both the oppressors and the oppressed from an oppression that perverts both.” And, in his introduction to the 2015 Restless Books edition of Don Quixote, Ilan Stavans states he sees the novel “not only as a novel but as a manual for life” whose theme is that “it is our imagination that sets us free.” I find myself on the side of Alonzo Lopez and of Andres, who after his flogging catches up with Don Quixote and tells him, “For the love of God, sir knight-errant, if you ever meet me again, though you may see them cutting me to pieces, give me no aid or succour, but leave me to my misfortune, which will not be so great but that a greater will come to me by being helped by your worship, on whom and all the knights-errant that have ever been born God send his curse.”

Indeed, help from Don Quixote is no help. Rereading his story over the last several weeks, I was reminded many times of the North Carolina man who, in December 2016, fired an assault rifle inside the Comet Ping Pong pizzeria in Washington, D.C. Believing the “Pizzagate” conspiracy theory about a child-trafficking organization run out of the basement of the pizzeria (which actually has no basement), the man had “the intent of helping people,” he said. The judge who sentenced him to four years in prison and three years of probation commented on the breathtaking recklessness of his actions, saying that it was “sheer luck” that no one was injured.

Unlike Don Quixote, however, this lone gunman was not alone in his thinking that the fantasies he was reading actually had something to do with reality. Knowledge is socially constructed, and right now people on social media sites like Reddit are churning out a worldview that’s dissociated from reality—and in which reality nevertheless gets ensnared, particularly once someone shows up with a gun.

Similarly, however clearly Andres, Alonzo Lopez, or anyone else sees reality, once Don Quixote shows up with his sword, lance, and highfalutin ideas, they cannot escape his madness. That the sword and lance were intrinsic to Don Quixote’s highfalutin ideas might lead one to question the ideas themselves; and, it turns out, the ideals of chivalry were a means by which the nobility laundered their own deeds and reputations. As the historian Norman Cantor explains in The Civilization of the Middle Ages, “The chivalric enthusiasm of the latter Middle Ages made the devastating and ruinously expensive Hundred Years’ War socially palatable, glazing it over with romantic motifs, both in the conduct of the war and in the official history of it written by Froissart, an English courtier. Froissart glamorized terrorism and massacres as a series of Camelot encounters and turned blue-blooded thugs like Edward the Black Prince into golden heroes of the Lancelot mold.”

If he really had to model his life after the lives he found in books, would that Don Quixote had valorized the lives of the shepherds in pastoral romances from the very beginning, rather than only at the very end of his life. As for what we are to do about the dangerous quixotism of our compatriots, however, I don’t know.