Home
»
Reading
»
“Doom as Entertainment”: The Johnstown Flood in Art and Literature 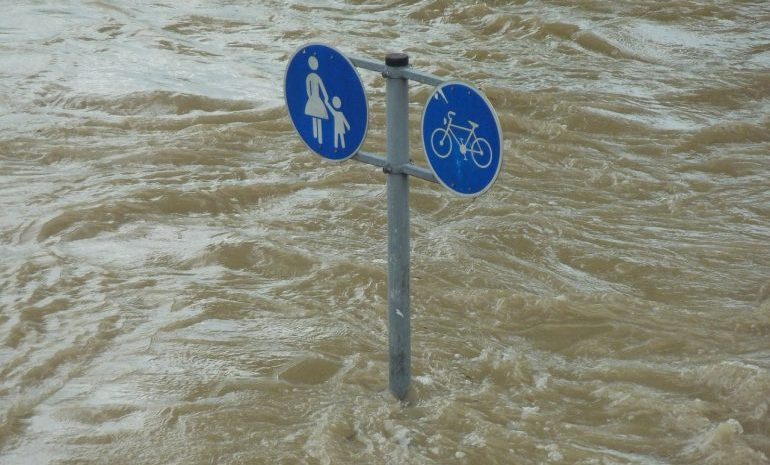 “It’s awful, watching doom as entertainment,” says a character in Kathleen George’s The Johnstown Girls, one of a number of literary works about the Johnstown Flood of 1889 that started with Walt Whitman’s “A Voice from Death,” a commissioned poem that first appeared in the New York World. The catastrophe was, wrote David McCullough in 1968, the biggest news story since the murder of Lincoln and “the most extraordinary calamity of our age.”

What is the line, I wonder, between “doom as entertainment” and disasters as larger-than-life reminders of the power of nature and the reality of our mortality? Between honoring history and capitalizing from it, between rubbernecking and paying tribute, between schadenfreude and fascination with the details that help us to understand the human condition?

The Flood museum, housed in the old Carnegie Library in downtown Johnstown, stays on the respectful side of the line between exploitation and testimonial, remembering stories of survivors and the more than 2,000 dead through photographs, objects, and a back wall that is a haunting sculpture of wreckage, pieces of houses and wagon wheels and telegraph poles.

Through artifacts and art, the museum assembles a picture of unfathomable loss and destruction and subsequent efforts to make meaning of it: an Academy Award-winning documentary, paintings of the chaos of disaster reminiscent of Hieronymus Bosch depictions of hell, paintings that recall the Biblical flood, a clip from a silent film. In it, a woman frantically rides a horse to her ex-love’s wedding to warn him and his guests of the oncoming flood. She dies a melodramatically noble death, cheesy by today’s standards, saving him and his new wife.

A model in a glass case traces the progression of the flood, lights replacing water to show the South Fork dam breaking and water racing down the valley, accumulating into the 40-foot wall of water that hit Johnstown and destroyed it in ten minutes. The model resembles a train set that allows visitors to “look down on the valley like gods,” says a character in The Johnstown Girls.

Johnstown native George’s occasional cynicism at the way horrific events become entertainment is understandable. Her 2014 novel examines the aftermath of this and smaller floods that occurred in 1936 and 1977 and illuminates the way a “whole complex life” can keep “being defined by a few moments of trauma.”

Still the definitive work on the Flood, Pulitzer-prize winning historian David McCullough’s first book The Johnstown Flood examines this preventable tragedy from multiple angles. Like the Titanic disaster, it’s impossible not to position it as a story of class privilege and arrogant disregard for nature, though McCullough manages to achieve this with sympathy and nuance.

The South Fork Fishing and Hunting Club, a summer resort for the rich and influential, was careless about upkeep of the dam that created a lake in the mountains for sailing and fishing, despite a membership of men who, as Kathleen Cambor says in her lovely 2001 novel In Sunlight, In a Beautiful Garden, “understood the work of making, shaping, insisting that the world conform to their particular, exacting standards.”

George’s recent novel traces the hundred years following the event and Cambor’s focuses on fictionalized lives of real people before the tragedy, offering the kind of intimacy only fiction can fully achieve. McCullough’s journalistic account is more immediate, telling the riveting story of the water that raced down the valley, sweeping up freight cars, locomotives, houses, and human corpses, devastating an entire city. Verbs and metaphors convey the sweep and scale of the devastation.

Trees were “snapped up or uprooted one after another,” a house was “flung against the near hill and smashed to smithereens,” water “ripped the railroad to shreds, tore out ties, twisted steel rails into incredible shapes, and swallowed up” equipment.

The clubsmen are likened to the Romans, the citizens of Johnstown are “like those who live in the shadow of Vesuvius” and “grew calloused to the possibility of danger.” McCullough compares the flood to “like turning Niagara Falls into the valley for thirty-six minutes”; the water to “a mountain coming”; the “avalanche of sound” was, according to survivors, like “the rush of an oncoming train” or “a lot of horses grinding oats.” Trees snapped off “like pipestems,” houses were crushed “like eggshells,” and “like an orange crate,” locomotives were lifted “like so much chaff,” a barn rolled “like a barrel.”

Sometimes the most powerful details are simple images. McCullough tells the story of a child who survived the flood by riding a mattress across the water, an image that inspired Marden Dahlstedt’s harrowing 1972 children’s book The Terrible Wave. That mattress-riding child also inspires a major plot element of George’s novel.

Ultimately, images retained by survivors provide one of the most poignant paragraphs of McCullough’s book—not just the “grotesque comedy” of familiar faces flashing past as buildings crumble around them, as they ride rooftops and cling to branches, but vivid mental pictures of “how things had looked just before the great wave struck; for this child it was the sight of. . . ducks, and purple pansies floating face up, like lily pads, in the yellow water.”