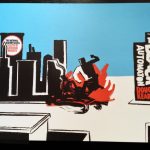 I was at a lecture recently about The Iliad—that beloved epic gorefest—when the scholar discussing the text referred to its author as “DJ Homer.” It wasn’t so much that Homer composed the text of The Iliad, he said. It was more that he remixed old stories that had been circulating for hundreds of years and put them all together.

I’ve always been fascinated by the idea of the remix, and I’m hardly the first. Remix studies has become an important movement within academia, taking in phenomena from internet memes to video mash-ups, from fan fiction to collage. Even though it’s as old as, well, Homer, William Gibson has said that it’s a form particularly suited to the contemporary: “The recombinant (the bootleg, the remix, the mash-up) has become the characteristic pivot at the turn of our two centuries.”

If ever there were a poet who updates the ancient Greek idea of a poet with a lyre into a DJ playing two records on two turntables at the same time, looping sections of one record into another to create new beats, it’s Douglas Kearney. Using contemporary musical methods like sampling and remixing, Kearney, particularly in his second book, The Black Automaton, has worked to create what he calls a “performative page.” These pages show the effect of culture and history on the project of self-making and show us the possibilities inherent in the twenty-first century lyric.

Sampling—a major practice in remix—is a key methodology for Kearney throughout The Black Automaton: Kearney includes endnotes where he lists the sources of his “samples” and the poems in which they appear. Kearney came of age in Los Angeles during the racially charged era of the late 80s and early 90s, and the book is saturated with mentions of the 1992 LA riots, which remains one of the worst incidents of police brutality against minorities in American history. Many of Kearney’s samples come from songs released around this time, in what would have been Kearney’s formative years. The relationship between one’s self and one’s context is inherent in the discourse of remix; because of its project of recycling and recombining pre-existing materials, remix “demands that people recognize some trace of history,” to quote David Shields. Using the specific samples he does is a gesture Kearney makes toward his personal and cultural history; using them at all is a gesture toward the very importance of historical attention in the project of understanding one’s own identity.

Kearney’s visually sprawling poem “Swimchant for Nigger Mer-Folk (An Aquaboogie Set in Lapis)” is a virtuosic performance that is itself a remix of Robert Hayden’s long poem about slavery, “The Middle Passage,” written in 1962. Hayden’s poem is already highly postmodern: it’s a polyphonic mixture of voices associated with the slave trade, using historical documents and juxtaposed narratives to allow readers to feel the full horror of the Middle Passage, the movement via ship of slaves from Africa to the New World. Kearney’s poem extends horizontally across a two-page spread and looks like a mimetic representation of a slave ship on an undulating surface of water, tossing material haphazardly from its stern to be devoured by sharks (represented by crooked falling text in the center). The deeper below the surface, the more ominous the text. Layers of text accumulate as the bodies of slaves do at the bottom of the visual field: the poem ends with the repetition of “haintin haintin”—an American colloquialism for haunting.

Again here, Kearney relies on musical structures and references for his intertextuality. The poem, after all, is a “swimchant” and an “aquaboogie.” The poem begins with a line from funk band Parliament: “Never learned to swim / but me sho can dive,” with the final word cascading letter-by-letter off the ship. Much of the poem combines acrobatic wordplay with musical phrases and deeply rhythmic patterns to create a sense of chant. The text that comprises the block of the slave ship, for example, reads: “O, Vermilion Ship-D’Wah-Wah-OOO. / Over millions shipped. Wah-Wah-OOO.”

There are several things to note about the way that Kearney uses remix and sampling here. For one thing, we see a mixture of different registers of sampling—literary sources like Hayden and Eliot rest alongside the Parliament sample and—to devastating effect—a snatch of “Under the Sea,” the song sung by the faux-Jamaican crab Sebastian in the Disney movie The Little Mermaid. On the one hand, these samples’ wider range gives us a fuller picture of African-American identity and Kearney in particular. This poem sits alongside many poems where Kearney interrogates the category of “black poet” in a poetry world dominated by whites, and who is at risk of exploitation by those would exoticize black poets in the service of some kind of redemption narrative.

A second thing to note about this poem is the way that Kearney consciously appropriates from other sources to call attention to cultural appropriation of blacks. In 2016, most of us are familiar with discussions about remix and appropriation. Kearney’s use of the lyrics from “Under the Sea”—complete with the Caribbean eye-dialect: “jus look at de worl aroun you”—is a bold gesture, one that forces the reader to confront her own discomfort with the Disney original’s racial caricaturizing.

Partly it’s because these poems rest side by side in the book with autobiographical poems that we are invited to read them in the same lyric space; partly Kearney is expanding our notion of what lyric poetry is. For him, one’s larger historical context, one’s culture, are as personal as one’s individual history. Even as he expands the lyric, though, he reminds us that this is poetry that hearkens back in the truest sense to the lyrics of ancient Greece—it is performative, it is spectacle, it is of emotion at the same time that it is highly rhetorical. And like all good remixes, and all good poetry, it brings us face to face with what is possible.