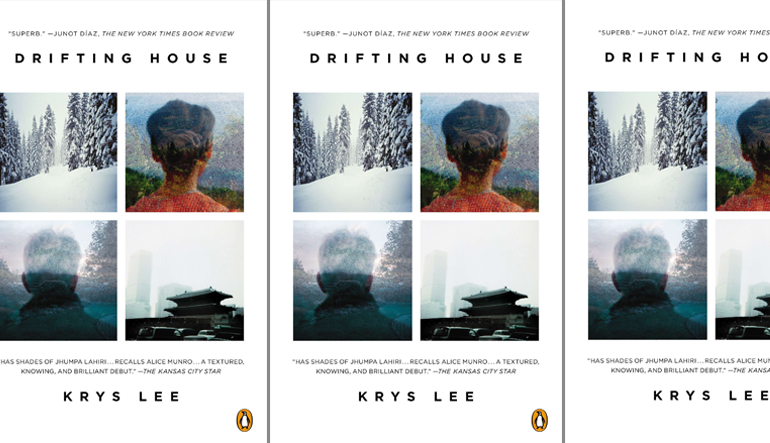 For this blog post, I am interviewing Krys Lee, author of the short story collection, Drifting House, published this year by Viking/Penguin. Drifting House follows the lives of Koreans both in their homeland and in the United States. According to the book’s website, “Alternating between the lives of Koreans struggling through seventy years of turbulent, post-World War II history in their homeland and the communities of Korean immigrants grappling with assimilation in the United States, Krys Lee’s haunting debut story collection Drifting House weaves together intricate tales of family and love, abandonment and loss on both sides of the Pacific.”

TL: First of all, congratulations on the publication of Drifting House. The reviews have been deservedly positive, and it is generating buzz and praise rarely seen for a short story collection. Many Ploughshares readers are writers of short stories who, like me, are submitting to literary journals with the hope of publishing a short story collection some day. I’ve noticed that you have published in several prestigious journals, i.e. the Kenyon Review, Narrative, and Granta (New Voices), prior to publishing Drifting House. At what point did you think you had more than just a group of stories? When did the stories you were writing start to gel together in your mind as a collection that could be published together in a book?

KL: Drifting House began to feel like a collection when I had over half the stories done and noticed how the themes and preoccupations complemented one another. Also, a few characters came creeping back at different periods in time, which gave me a sense of the story collection’s scale. A lot of history and social issues are covered as I’m deeply involved and invested in what happens to Korea and Koreans, both North and South. That also ended up unifying Drifting House. My preoccupation with time as an entity was also a repeating motif throughout the book, which I highlighted in the beginning. None of these preoccupations were premeditated but did end up giving an organic structure to Drifting House.

TL: You mention that you’re “deeply interested in Korea and Koreans, both North and South,” and that is part of what unifies Drifting House. As a writer, were you concerned that having a book that is connected through Korean and Korean American characters might affect how it is viewed by non-Asian readers? I ask this because I know my stories about Korean Americans will be viewed as “ethnic” while writers who are Caucasian who write about, say, Canadians will not, though they too are writing about a specific place and culture. Do such concerns affect your writing process, or is that more of a worry that comes later, i.e. when marketing the book?

KL: Good question. This issue didn’t concern me at all while I was writing Drifting House because I was writing about a world I knew intimately and cared deeply about. I’ve lived in Seoul, South Korea, for a long time now and thought of my characters as individuals, rather than of a certain ethnicity. Only in the marketing and critical reception did I see my work become something Asian/Asian American. Of course, in some ways it is, and I embrace that. But good fiction is both about and beyond the ethnic origins of its characters, whether they are Korean, Jewish, Irish, or Russian. We had an auction between eight major U.S. publishers for the two book deal, and I was repeatedly told by editors that they had been completely immersed in the characters until they felt as if they had become them. I had very much wanted to create characters that were distinct, vivid and real, and their plights dramatic and urgent, so readers would think of them as individuals rather than simplify them to an ethnic background. We read fiction for the entire complex experience, including and beyond our ethnic origins.

TL: What has your book tour been like so far? It’s a dream that most writers don’t get to live. Can you give us a little peek into what a debut book tour is like from a writer’s perspective?

KL: As a debut writer, I’m thankful to have a book tour at all. It’s not standard anymore, and it is an indication of how much faith the publisher has in a book and how much they are willing to invest. The tour gives you opportunities to meet your prospective audience, tap into the local press, and meet booksellers. I found all three aspects of the tour rewarding but exhausting. There were days when I had radio interviews back to back that only allowed me snatches of food, followed by a reading and a late dinner. I didn’t have time to use the facilities at the beautiful hotels that Viking had booked, and the stress of being a public person when I was used to hiding out in corners and in the safety of my apartment was a little hard. But I met some amazing readers on the road, and really enjoyed the Q and As with different audiences across the country. It was also a great way to reconnect with old friends. I imagine the book tour for the second book will be less stressful and even more enjoyable since I won’t be as fearful when faced with interviews as I was this time.

Krys Lee’s writing has been featured in Narrative Magazine, the Kenyon Review, Granta (New Voices), the Guardian, the New Statesman, the Huffington Post, and Conde Nast Traveller (UK). She is currently revising a novel. She lives in Seoul, Korea, with intervals in San Francisco.