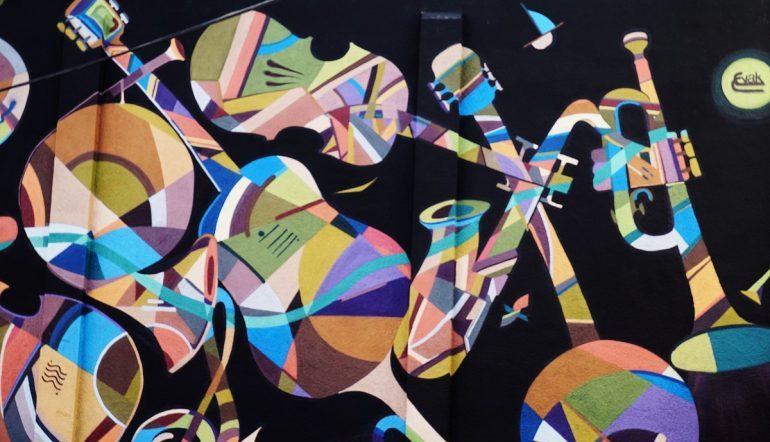 Chicago has lost another tenor sax great. Eddie Johnson was
eighty-nine. He played up until 2004, when his sweet swinging horn gave way to
emphysema. Like many Chicago jazzicians, Eddie chose family over the perils of
road life and fame. He had an offer to join Duke Ellington’s band in the Forties, but went with the more
lucrative jump blues gig with Louis
Jordan. Over the years, Eddie performed with Ellington, Coleman Hawkins,
Benny Carter and Cootie Williams, among others. But between family demands, a
bout of tuberculosis that took half a lung, and head-butting with the local
musician’s union, Eddie transitioned out of clubs and into a steady job as the
city’s Chief Systems Engineer.

As he neared retirement, Eddie burst back onto the music scene, thrilling crowds at the
Jazz Festival in 1980 and making the first recording under his own name since
the early Fifties, and later recording with Kurt Elling. Eddie packed his steady
gigs at Andy’s and the Moosehead.
Fans loved his molten ballads and how hard he could swing. The music was
hip-grabbing. Eric Schneider
used to warn men in the audience to “hold on to your ladies” before Eddie
played a ballad, it was that spell-casting. Along the way, Eddie helped to
school select young musicians like Eric and Brad
Goode. The latter (who is married to this blogger) was only twenty-one when he joined the band.
Eddie would deliberately call tunes he didn’t know. There were no music stands
on the gig back then, no Fake Books. You had to develop your ear–to hear the
changes and play on the fly. Every night was a baptism by fire. Eddie de Haas
would outline the chord roots on his bass or John Young would map them on the
piano, then the young musicians would go home and shed. “I literally learned
hundreds of tunes on that gig,” Brad laughs. By the next night, he’d not only
know the tune, he could synchronize with Eddie’s phrasing.

In
addition to how to swing, how to use sound to make the music come alive, how to
create texture and smoke in their notes, the young musicians in Eddie’s bands
learned all the unspoken codes, things older players used to transmit on the
bandstand. Show up straight, well-dressed and on time. Don’t take more choruses
than the leader. Give the singer space. Don’t play two tunes back to back in
the same tempo, style or key. Mix up the set: a ballad, then a blues, a medium
tempo swing tune, something in ¾, one with a Latin beat, wrap with an up-tempo
swing. Acknowledge applause with a bow. “Don’t respond to a compliment by
complaining about your chops,” Eddie said. “People don’t want to hear that.
They enjoyed themselves. Say thank you.”

These are the codified graces not taught in a
classroom, lessons learned from elders. And Eddie was grace personified, as
elegant in his speech and dress as his hero, Ellington. At the end of a gig,
Brad often got fined for infractions like not being ready to jump on stage when
the break was over or not dressing appropriately. He got docked once for
showing up with duct tape on his trumpet. A professional doesn’t show up with a
horn looking like that, he was told. The fines were good-natured, meant partly
as a joke. But the laws were firm. Before a tea dance in the Gold Coast
ballroom at the Drake, Eddie
reminded Brad to wear a tuxedo. “And red socks,” he called out as they left the
club. “So, the next day, I go all over town to find red socks,” says Brad. “Get
to the gig and the whole band cracks up. The ballroom stage is so high, my
socks are eye-level with the dancers. I didn’t know he was kidding. Eddie was
still laughing about that at his 80th birthday party.” Playfulness
is one of the unwritten laws.

It was Joe “Doc”
Poston, Eddie’s uncle, who taught him how to play. Whenever Doc caught his
nephew finger-snapping along with Lester Young,
he’d scold him to “listen to Hawk, this is
the sound I want you to get.” But as soon as his uncle was out of earshot, “I’d
revert back to Prez. Nobody swung like Prez,” Eddie told jazz critic Neil
Tesser. After graduating from Englewood High school in the late Thirties,
Eddie was offered a full college scholarship to Kentucky State. They used jazz
bands to boost enrollment back then, like they use basketball and beer bongs
today. Times have changed. Jazz isn’t learned on the bandstand the way it used
to be. For one thing, there are fewer gigs. Like writers, most jazz musicians
these days have to teach to survive. Many of them wrestle with the question of
whether art can be taught. Technique can be taught, so can templates for
improvisation. The music has changed along with this shift to the teachable.

In
an interview, David Foster Wallace said that while the “patricidal work” of
postmodernists was great and necessary, “patricide produces orphans, and no
amount of revelry can make up for the fact that writers my age have been
literary orphans throughout our
formative years.” It’s possible that jazz has reached a similar state.

E.J.’s style remained an authentic
blast from the past, but not a relic; he was one of the last true exemplars of
the Swing tenor sound, in which every note carries its own inflection, each
phrase a distinct imagery, the whole solo rippling and cresting with the
limitless nuance of human speech. It was old school through and through. But
E.J. played with such energy and verve that it never sounded dated. […]E.J. was
effortlessly kind, soulful and gracious, and you heard all that on a ballad.
But he had a spark of whimsical mischief that kept things lively, whether on
the stand–where it could set a solo blazing–or at the bar, after the set, where
it would erupt in infectious laughter over a small-batch bourbon.

There
are moments when the past sloughs off with finality and the ground beneath us
feels unsure as water. Jazz celebrates this very paradox: the union of fixed
and fluid. Eddie will be greatly missed. An era died with him.

This is Carol’s fifth
post for Get Behind the Plough.

Images courtesy of The Examiner, The Eddie Johnson Discography, and The John Young Discography.