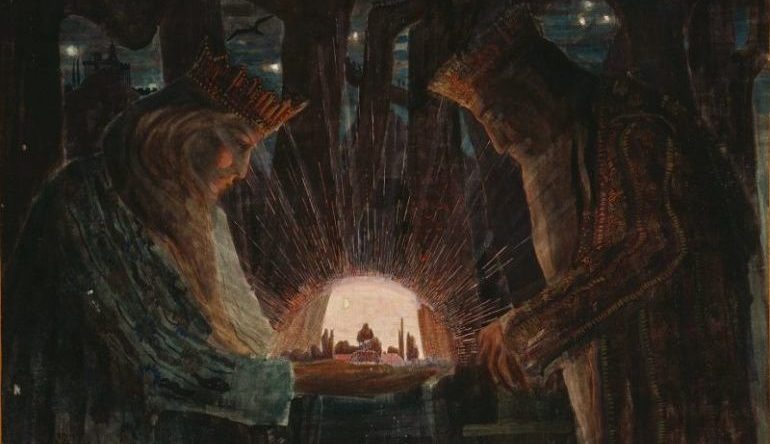 Mythopoeia, the making of myth, is primarily considered a genre reserved for writers of high fantasy (Tolkien coined the term). But to restrict mythopoeia to fantasy alone—to think of mythopoeia as a genre rather than a technique—is a disadvantage to realist writers, who then miss out on the advantages of mythic writing. Not only does mythic language give the ordinary world a sense of the extraordinary, it also grants power to characters of realist novels who might otherwise have no control over their stories, like the narrators of Jeffrey Eugenides’s The Virgin Suicides, Kevin Brockmeier’s The Truth About Celia, and Shirley Jackson’s We Have Always Lived in the Castle, all of whom rely on enchanted-sounding prose to tell a realist story. Using mythic language raises their voices above the powerlessness of the mimetic real, creating a new platform—the realist “mythic novel”—where the narrators can exert agency over their narratives in ways they couldn’t have had they told their stories using straightforward prose.

For example, the boys narrating The Virgin Suicides rely on such mythic metaphor to strengthen their obsession with the Lisbon sisters. In the scene when the boys observe the paramedics’ visit after one of the sisters attempts suicide, the boys’ embellishment is displayed clearly; the scene shouldn’t be “mythic” by any means—there’s “dog shit,” “sweating,” “fumbling,” and “dirt,” as well as evidence of a mundane life (a “lone croquet wicket,” “blazing, overexposed grass”)—but the boys cannot comprehend in mimetic language the tragedy unfolding (Cecilia’s first suicide attempt before her second, successful one). They need to change the way they talk about it, so they switch to mythic metaphor, describing the scene as “two slaves offering the victim to the altar…the priestess brandishing the torch…the drugged virgin rising up on her elbows.” Here, the effect of using mythic metaphor over straightforward prose raises the boys out of their helplessness, granting them narrative control in a situation where they otherwise have none.

When Lux Lisbon begins to diminish (she has “jutting ribs,” “cold sores at the corner of her mouth,” and patches of hair missing), the boys spin Lux’s wasting away as a thing to be admired. Lux is never described as ill, unhealthy, or starving; rather she is made into a “pale wraith,” ethereal, otherworldly—mythical. Nothing the girls do warrant such worship; in fact, their ordinariness threatens to be exposed at every encounter, and only the boys’ steadfast mythical language keeps them out of reach. When the boys read Cecilia’s diary, they use mythic language to describe their feelings: “We knew that the girls were our twins, that we all existed in space like animals with identical skins…they knew everything about us though we couldn’t fathom them at all.” Considering the only diary entry directly quoted reads, “Monday February 13. Today we had frozen pizza,” it’s doubtful the diary’s events warrant such poetic, enchanting declarations. It’s clear the reality surrounding the girls is equal parts mundane and gruesome, but through this lyricism the boys create an enchantment around the girls until they become “a mythical creature with ten legs and five heads,” legends “too powerful to live among us.” The boys’ grandiose interpretations elevate themselves above the helpless situation they’re in—powerless to stop the suicides—and instead, through their enchanted language, they mythologize the girls beyond the need for salvation.

Christopher Brooks in The Truth About Celia is another example of a narrator using mythic language as a stand-in for agency. Celia is framed in two narrative layers: the book actual, by Brockmeier, and the book fictional (of the same title), by Christopher Brooks, who has written Celia after the unsolved disappearance of his daughter. Brooks exists, then, as father-narrator trying to find solace in fiction. He can’t find or save his daughter, so, helpless but for language, he uses enchanted prose to mythologize and immortalize Celia. In “The Ghost of Travis Worley,” as the titular ghost leads Celia away, Brooks slips into her perspective:

I remember that I took his hand, and he led me into the woods, up the rising hill of elm trees, and everything I could see and hear, and everything I could feel on my skin, seemed to melt away and disappear—the leaves, the insects, even the ground beneath my feet. All around me the world was suddenly much clearer and much smaller. I would have been frightened if it were not so beautiful… I went drifting away like a boat whose mooring has snapped, sailing through the currents of the ocean.

This explanation for Celia’s disappearance, an alternative to kidnapping, is almost magical, nothing like the traumatic event itself. Through his enchanted language, Brooks accesses a degree of power otherwise eluding him; Celia ceases to be a girl, becomes instead this greater thing within the prose itself. By constantly creating and recreating magical versions of her, Brooks raises Celia from missing to mythic.

Granting agency to powerless narrators is a benefit of using mythic language in realist stories. The challenge, of course, is to not blur the rules of the story’s world by blurring the line between mythical/lyrical prose and reality. When employed too often or incorrectly, the mythic metaphor creates uncertainty—how literal should a reader take this language?

In the examples above, the switch from reality to lyricism is obvious, but sometimes the distinction is harder to determine—like with the narrator of We Have Always Lived in the Castle, Merricat. Her entire worldview revolves around magic. Sometimes she uses language clearly meant not to be “believed,” like when she wishes to “walk home across the sky instead of through the village.” That’s figurative language, not sentiment a reader is meant to believe possible. There are other moments, however, when she uses mythic/magical language and it’s unclear how literal to take it. Her talismans are perfect examples: she believes if they remain intact, her family’s safe, so when one is disturbed, she calls it “a very bad omen, one of the worst,” and decides it’s “useless now as protection,” and must be destroyed, “in case it was now actively bad.” This isn’t an instance of magical language; Merricat presents her talismans as supernatural. This can confuse a reader, who may not know when to take Merricat at her word and when to assume she’s merely using mythical/magical language for effect (my friend and I have had several arguments about whether the magic in this book is real). I happen to love Shirley Jackson, and the rules of reality in novels don’t often interest me, so I think Castle gets away with this confusion. However, in a less remarkable novel, or in the eyes of a less forgiving reader, such ambiguity is a real risk in writing mythic metaphor or lyrical/enchanted prose. (Or so my colleagues’ workshop letters regarding my own writing often suggest.)

But whether you read Merricat’s magic as real or imagined, the benefits of the technique remain: Merricat uses mythic language to give her strength when she has none, like when local kids harass her and she pretends she “did not speak their language; on the moon [where she imagines she lives] we spoke a soft, liquid tongue, and sang in the starlight, looking down on the dead dried world.” Like the embellishments the boys make about the Lisbons, like the stories Brooks writes about his daughter, here is another example of how mythic language grants strength to the narrator in helpless circumstances.

With lyricism as its driving force, enchanted prose can create anew any sentence, pull wonder and possibility from the tired or traumatic. It elevates, inspires, reconceives. Crafting myths that grow from and make sense of our realities is a large part of what novels do regardless of genre, and it’s long since time we aim for a reconciliation between mythopoeia and realism—novels whose touches of magic heighten, but don’t replace, the ordinary.

Tags:Jeffrey Eugenides, Kevin Brockmeier, Shirley Jackson, The Truth About Celia, The Virgin Suicides, We Have Always Lived in the Castle