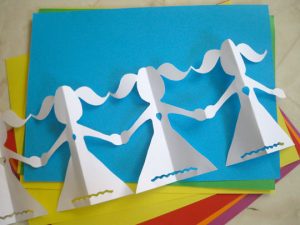 During the first creative writing class I ever taught, a student approached me with a particular challenge. She had a wonderful premise for a novel that revolved around a pack of women who worked in a 1970s factory in the Midwest. But even with a strong idea, she was still having trouble getting the novel off the ground. “The problem is,” she said, “that none of my characters want to do anything.” They all looked the same, acted the same, and felt the same. In essence, her characters were a chain of paper dolls. Sound familiar?

As a class, we discussed her options. The first was to introduce some kind of event that would force her otherwise reluctant characters to react. The second choice (which was not mutually exclusive from the first) was to differentiate her characters. The act of character differentiation is two-fold. Characters must be distinct not only from each other, but from you—the author—as well. If you think of your characters as puppets, you’ll sentence them to behaving only as you would.

So how does a character gain her independence? Character templates are a good place to start, but the true story begins when these people have to act and interact. Character breeds plot, not the other way around. The better we are at character differentiation, the better we’ll be at writing the best plot. Let’s consider a few examples.

You Are What You Read

The hit Netflix series “Orange Is the New Black” (based on a memoir of the same name) chronicles the day-to-day life in a women’s correctional facility in Litchfield, Connecticut. The characters are absolutely unforgettable, and their lives—their choices and the lack thereof—elevate the show from what might have been a cheap drama to a complex inquiry into our country’s penal system.

OITNB really shines by exploring matters of shifting identity. The prison environment threatens to erase all sense of personhood in the conventional, suburban terms of “you are what you own.” These women all dress alike and have nothing aside from the small items purchased through the commissary. They are often called “inmate” by the correctional officers. They are randomly assigned work activities and cell mates. They eat when they’re told; they sleep when they’re told.

In order to survive incarceration, these women need to find ways to recreate themselves, and many of them end up at the prison library. To see what a woman reads while under lockdown is such a clever, economical way to gain insight into her inner self. Throughout the show, we witness Red’s breadth when we spy her reading Freshman Year and Other Natural Disasters by Meredith Zeitlin as well as Jonathan Tropper’s This is Where I Leave You. We realize Alex harbors deep longings as she reads The Glass Castle and Born to Run. And we really get a sense of Piper’s inner battle between order and chaos from her Jane Austen selections next to her paperback of Gone Girl. And who wouldn’t want a book recommendation from Taystee, the librarian who discusses Ulysses and Harry Potter in the same breath?

The lesson here is that choice is a very powerful gift for a writer to bestow on a character, especially in confining environments. Deny someone most of her choices, and the few she’s able to make will define her. 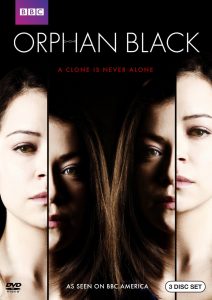 A lot more than appearance goes into helping a reader picture a character. Typically, television shows can afford to be a little lazy in this regard since their audiences can actually see the cast members. But what about a show like “Orphan Black,” in which one actress plays at least six of the roles? The show begins when Sarah Manning assumes the life of her clone after she (the clone) commits suicide. As Sarah struggles to maintain her own identity, more clones are revealed, as is the sordid history of their genesis. The show has its roots in sci-fi and its depth in the complicated dynamics of individual identity.

There is no bigger character differentiation challenge than creating a set of “genetic identicals,” and writers can take a few tips from how the actress (Tatiana Maslany) embodies each character. Their faces may be the same, but their “ways of being” are distinct. Let’s consider each of these clones sitting in a chair. Even if they were all dressed alike, you’d be able to tell the difference. Sarah would sit with her knees spread wide. Cosima would lean against the arm rest. Alison’s hands would be folded while her leg jiggled. And Helena would kneel or crouch in the corner.  They’re all sitting, and they have identical DNA, but they are not the same. Their similarities have equal weight with their differences.

Opposing forces create necessary tension to move a story forward, but that doesn’t mean characters have to repel each other in every way. One of my biggest pet peeves about the way female friendship is portrayed on television and in film is this notion of necessary opposites. You’ve seen it before—the type-A, straight-laced woman who’s afraid to love again is BFFs with a goofy, loose-lipped serial dater who has horrible taste in men. The problem is not that these two kinds of women are friends. The problem is that the portrayal of the relationship ends with their differences, thus becoming some mechanism for comic relief rather than an authentic rendering of real friendship.

Beware of opposites for opposites’ sake. It’ll only get you so far, and then you’ll be stuck. Sometimes characters are at odds not because of their differences, but because of their similarities. Have you seen the classic episode of “30 Rock” where Liz Lemon tries to befriend herself? Spoiler alert: it doesn’t end well. We would do better to first ask ourselves about the connection between two characters, and then let their differences become complements rather than mere opposites.

I am not my Character

Perhaps our biggest challenge, especially for novels written in the first person, is separating ourselves from our characters. Even in memoir, the “you” on the page is not the “you” in the flesh; it’s a version of yourself rendered from a particular angle based on the story you’re telling. Your characters shouldn’t behave exactly as you would any more than they should do the direct opposite.

Some writers talk about their characters “telling” them what to do, but I’ll admit I’m not a huge fan of that tactic. It sounds too hokey to be effective. But I did hear Toni Morrison talk about this idea last October in a way that made me rethink my stance. She said when she was writing Song of Solomon, she could almost feel Pilate’s character looking over her shoulder as she wrote. At times, the two of them were at odds. Morrison said this friction helped her push the novel beyond her original conceptions of it.

Perhaps this is the answer—finding a way to recognize a character’s presence, work in tandem with her, and tell the story as two instead of one.