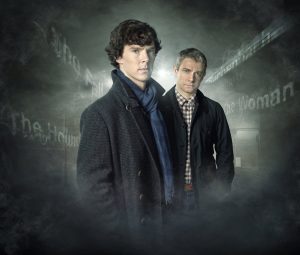 I don’t know about you, but when I write my rough drafts, I’m staggering around in the dark. There are plot holes, dropped story lines, and unanswered questions—all the good, gnarly stuff that goes into the early part of the writing process. The key for us writers is—when the time is right—to find the answers to our own riddles. Easier said than done, right?

That’s why I love watching Sherlock Holmes crack a case. Even the smallest details never evade him, and he never fails to detect the pattern within a sea of chaos. So let’s take a few tips from this master of problem solving. The BBC adaptation of this well-loved character and his sidekick John Watson isn’t only entertaining to watch, it’s surprisingly insightful when it comes to the labyrinth of revision. Here are my favorite quotes and inadvertent writing axioms, Sherlock-style.

I wrote about the idea of the fallible hero (and villain) in a recent post. But for revision purposes, I like to think of it this way: first drafts speak in extremes, and revised drafts speak in nuances. When we first begin to sketch a story, we tend to rely on prefabricated binaries—right and wrong, yes and no, good and evil—as a scaffolding. Once that scaffolding is built, it’s time to revisit what we’ve done and ask ourselves where we’ve relied on simple, rather than complex explanations.

Right now I’m reading Cartwheel by Jennifer duBois, a psychological whodunit inspired by the Amanda Knox story. Told from varying points of view, the novel never allows the reader to settle for any foregone conclusions. Lily Hayes may be the suspected culprit in Katy Kellers’ murder, but for much of the novel (I haven’t finished it yet), Lily’s guilt seems as likely as her innocence.

What duBois is teaching me through her smartly crafted novel is that stories often work best in webs. Emotions, relationships, and motivations are usually much more tangled than they are straightforward, and during the revision process, we must ask ourselves if the knots we’ve tied for our characters are too easily undone.

“Get at the stuff that matters.”

The wisdom here is twofold, and it comes from Sherlock’s attempt to explain the way his brain operates. “Listen,” he says, pointing to his head. “This is my hard-drive, and it only makes sense to put things in there that are useful. Really useful. Ordinary people fill their heads with all kinds of rubbish, and that makes it hard to get at the stuff that matters.”

First, Sherlock warns us against the cluttered mind. It’s the detective’s—and the writer’s—worst enemy. Writing is a contemplative act, and the noise of everyday living can counteract our best efforts to let the quiet of our minds lead us deeper into our own creativity. A writing teacher once told me that every new creative project invites the writer to give something up for its sake. That sacrifice, however small, is a way of marking your commitment to the new endeavor. For some, it may mean signing off Twitter or Facebook for a while. For others (like me), it could mean clearing your desk of bills, old drafts, and post-it notes to provide literal space for a new project to expand.

Second, Sherlock’s quote reminds us that revision is a time to eliminate what doesn’t matter to make room for what does. Unnecessary “rubbish” (i.e. excessive description, straying plot lines, and ineffectual auxiliary characters) can squelch the moments of genius in a manuscript in the same way the constant “ding” of social media notifications can squelch your creativity. A scattered mind can’t help but produce a scattered draft.

“Bitterness is a paralytic. Love is a much more vicious motivator.”

It’s impossible to write a good novel using only your head and not your heart. This mantra can become our revision’s true north by answering two questions:

Who, or what, do your characters love?

What will you, the writer, not spare your characters from, despite your love for them?

These questions bring to mind Salvage the Bones by Jesmyn Ward, in which a family bands together before, during, and after the onslaught of Hurricane Katrina. The characters care for each other in complicated ways, which I consider an outgrowth of Ward’s strong connection to her own creations. While writing the book, Ward says she realized she couldn’t “dull the edges and fall in love with my characters and spare them. Life does not spare us.”

Ward calls this “narrative ruthlessness.” I think Sherlock would approve.

“The rules are wrong.”

This line comes to us from a moment when Sherlock tries to goad Watson into playing a game of Clue:

Watson: Ah, no. We are never playing that again.

Watson: Because it’s not actually possible for the victim to have done it, Sherlock, that’s why!

Sherlock: It’s was the only possible solution!

Watson: It’s not in the rules.

Sherlock: Well, then the rules are wrong!

As a creative writing teacher, I have students who love rules and students who hate them. In my mind, they both suffer from the same failure of imagination. Or, as Sherlock might put it, “You’ve got a solution that you like, but you’re choosing to ignore anything you see that doesn’t comply with it.”

Many famous writers break all kinds of rules taught in Creative Writing 101—use lots of dialogue! Create likeable characters! Don’t mix metaphors! It’s always good to be conscious of the rules you break and why. Every effort should help solve the case, and for us, the case is always a manuscript that hasn’t reached its full potential. Instead of considering the rules you’re following or breaking, take it a step further and ask yourself—what do I need to pull this off? In answering that question, sometimes you’ll find the rules are irrelevant.

“All that matters to me is the work! Without that, my brain rots.”

Sometimes revision can feel like poking yourself in the eye with a fork, so we must remember that we thrive on work that needs to be done. Sherlock takes equal joy in having solved and solving, much like we find joy in having written and writing. Just when we’ve found our way out of the maze we’ve written for ourselves, it’s time to get lost once again.