Home
»
Uncategorized
»
Episodia 1.16: How to Structure Your Memoir 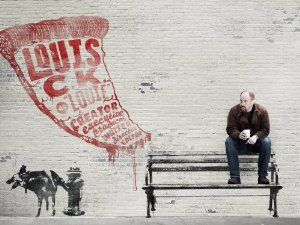 Sometimes memoirists can feel as if we have very few choices about our stories. Bound by truth and memory, we can often conclude there’s not much room for our creative selves to have a say. But here’s a secret—we don’t have to pin down a narrative in the order that events occurred. We can switch things around, pair things together, and work associationally. Isn’t that exciting?

The key to memoir is finding the right “slant” from which to tell your story, as Louis C.K. has found in the hit series based on his life, “Louie.” Using what I’d call an “episodic” structure, each installment revolves around some kind of narrative punch-line that’s funny, sad, troubling, insightful, or all of the above. By fashioning his life into episodic nuggets (much like memoirists Nick Flynn and Anne Lamott), Louis C.K. gives writers an example of how we might find a possible structure out of the mess of stories that make up our lives.

In fact, there are so many options for “memoiristic” structure, it can get overwhelming. So let’s consider a few of those choices to help you think anew about how your story might best be told.

Sometimes, there’s no need to overthink it. You can pen your story just as it happened, in the order it happened. Both Townie by Andre Dubus III and A Heartbreaking Work of Staggering Genius by Dave Eggers employ this method to great effect.

The pros: following a traditional structure may free you up to try more experimental kinds of language and/or poetics. This sort of structure also pairs well with humor.

The cons: your story will start where it starts, and end where it ends, so to speak. Your job will be to imbue the beginning with questions and the end with meaning based on what you’ve chosen to include. It isn’t quite enough to say, “the story stops here” because that’s how it happened in real life. You’ll have to look a bit deeper to find why that chronologically last moment is, indeed, the “end.” Knowing the difference between the last moment and the “end” will help you shape your story from the onset.

Sometimes our lives hinge around certain moments so integral to our understanding of human nature that we tend to return to them over and over. This structure helps highlight the major “shifts” that have occurred in our lives, and we gather their meaning from witnessing how things changed from “before” into “after.”

Sometimes that “shift” is a death, a relationship, a trip, or a decision. Sometimes the “shift” is an important cultural moment. A colleague of mine, Samantha Smith, is working on a memoir that details how her father’s rescue work post 9/11 created a series of fissures in her family life. In order for this kind of narrative to reach its full potential, we need to understand the family dynamics before crisis sets in, and then watch the crumbling effect that occurs after.

It might make sense for a memoir to be driven not by events, but by people. A portion of Justin St. Germain’s memoir Son of a Gun could be seen in this light: in an attempt to fully understand his mother (and himself) after her violent death, he completes a series of smaller character studies about the men who loved her.

The tough aspect of this method is finding a way to keep building meaning (or the stakes, if you prefer) as the story progresses. You never want your story to feel flat, like a book report that hops around from subject to subject. You’d want one to build on the next and the next and the next, ideally leading to some new conclusion you hadn’t seen before.

Some memoirs are less about events and characters, and more about a state of mind. Are you writing about a relationship that had a particular hold on you, or a secret that caused you to turn progressively inward? I find these kinds of narratives particularly exciting because they can escalate in such fascinating ways. As you find yourself falling deep into the grip of something, is your worldview starting to change? Are other people noticing your downward spiral? How did you pull yourself out?

This kind of structure can tend to be overwrought in addiction-genre memoirs, so it’s important to consider the stakes and how they’re changing over time. How might you find ways to communicate what’s occurring in the outside world, giving your work its proper context and cultural relevance?

This technique works beautifully for plenty of shorter pieces (such as Karen Thompson Walker’s “Seven Apologies I Owe My Husband”). If you’re looking to explore a particular dynamic in a distilled fashion, the “list” might be just what the doctor ordered. Other kinds of lists might be “things my father never taught me” or “false epiphanies I’ve had.”

You’ll likely use this to communicate some multi-layered insight, so choosing the order of your list is of utmost importance. This style might also be useful for seasonal pieces if you’re looking to publish in magazines, etc.

It can happen—and often does—that sometimes we need to find ways to make the ordinary feel just a little bit more extraordinary. Perhaps a certain memory, a certain trip, has such a distinct feel in our consciousness that we must reach beyond traditional limits.  If you’re someone who isn’t a literal or linear thinker, this could be where you shine.

Jacob Newberry’s stunning essay “What You Will Do” chronicles his time in Jerusalem and Israel throughout a series of commands, done in the second person. What the reader experiences, then, is the older Jacob—who’s already been through the trip—guiding his younger self through a series of complications. It gives the piece great depth, and what becomes remarkable is not just the story itself, but the way in which it is told.

This structural strategy can work for longer and shorter pieces alike. Memory tends to be quite tangible, and we associate certain items with things of great value, i.e. the hairbrush that calls to mind our mother, or the Zippo lighter that reminds us of a long lost friend. Anchoring a piece in a concrete item also grounds your reader and helps connect a string of memories without your having to explain why you’ve chosen to include them.

For example, “A Rose is a Rose is a Miracle Heartbreak Cure” by Helen Oyeyemi demonstrates how one central item—a rose—can illuminate her travels through the reader’s mind as well as the heartbreak she’s suffering.

The downside of using this structure is the propensity toward heavy-handedness and cliché. “The Item” will work best in subtle tones, so you’ll want to consider the complicated dynamics your chosen item helps you explore, rather than, say, allowing yourself to rely on well-worn paths like, “Every rose has its thorn.” How can your item express something unique about a particular relationship, a particular time in your life, or even a particular secret or state of mind?

Reading Jo Ann Beard’s essay “The Fourth State of Matter” was undoubtedly life-changing for me. She starts out with two seemingly unrelated events, and throughout the course of the essay, the memories commingle, separate, and converge in ways that are nothing short of mind-blowing. If you can, find it, read it, discuss it.

So there you have it: a brief intro into all the magical turns a memoir can take. We don’t have to be hemmed in by fiction writers’ techniques! I’ve barely scratched the surface of possibilities here, so I hope you are encouraged to experiment with one (or all) of these structures or create one of your own. What kind of memoir will you write?