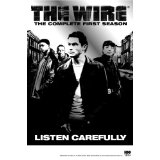 A while back, when I was living near Newark, I got a summons for jury duty. As soon as I saw the thin slip of paper that labeled me as “juror x,” I started to brainstorm how I might be able to get out of it. I was more useful at work, I reasoned, and I didn’t want to leave my boss and co-workers to pick up my slack. What difference could I make in our broken judicial system, anyway?

Around this time, much of America was watching HBO as “The Wire” pulled back the curtain on the country’s legal and law enforcement empires. No longer was there the simple “Law & Order” dividing line between good and evil.  Instead, the show—created by a former crime reporter—gave us reality. There was no good or bad “side,” per se. There was personal interest, inequality, and—every once in a while—some attempt at justice, whether it was in the courtroom or on the streets of Baltimore.

But I didn’t have time for “The Wire,” or much else, for that matter. I was a young woman with dispersed affections. I lived in New Jersey, worked in Connecticut, and almost everyone else I knew lived in my hometown in Pennsylvania. I had a long commute, a long-distance boyfriend, a demanding job, and student loans up to my ears. I wanted to be a writer but didn’t have the guts or the energy to try.  I was twenty-three, tired, and naïve.

These were just a few of the reasons I showed up for my summons, hoping I wouldn’t get selected. When the judge entered the courtroom and said the trial would likely last three weeks, we let out a collective groan. But what he said next changed the atmosphere in the room. The trial we’d been selected for wasn’t just any case. It was a murder case, an attempted murder case, and an aggravated assault case. The defendant entered, no older than I was, a young man who had been awaiting trial for two years. This was important, it was urgent, and it had the right to demand all of my attention.

Who Will You Be?

I could write essay after essay about serving as a juror in a murder trial, but there are a few moments I often return to when I need a reminder of how I hope the experience changed me. The first occurred during jury selection. Each candidate was sworn in and asked to answer the same questions in front of the other prospective jurors, the lawyers, the defendant, and the victims’ family.

Have you ever been the victim of a crime?

If so, what was the nature of the crime?

Will that crime keep you from being impartial in this trial?

Will you weigh all testimonies equally, including those given by police officers?

First of all, it’s a fairly troubling exercise to be introduced to a group of people through the crimes committed against them. Secondly, I’ve come to appreciate the stark nature of these questions and the opportunity they give me to take a hard look at myself (every writer, once in a while, ought to turn that observant eye inward). I remember sitting there, waiting my turn, thinking I had no crime to report. Then a young woman shared that her car had once been broken into, her radio had been stolen, and that she would likely favor the testimony of a police officer. She was excused.

As I listened to her, I realized that I had been the victim of a crime. How could I have forgotten? When I was in college, I’d been home alone during a break-in and an attempted robbery. I was unharmed and the assailant was caught eventually, but why had I never identified myself as a victim? (That is an essay for another time.) More to the point, would I allow past harm to preside over my present actions?

I decided that I would not, and I’ve never found a better question to ask myself when examining my own fears, motivations, and shortcomings—especially when they affect the well-being of others.

Over the next three weeks, the trial unfolded as if meant for television. No-show witnesses skipped town while under police protection, important evidence was lost, the integrity of key witnesses was called into question. We inspected diagrams of the crime scene and heard impassioned testimonies from the stand.

When it came time to deliberate, the other eleven jurors and I were split right down the middle. We’d all heard the same evidence and arrived at opposite conclusions. Later, after we’d reached our verdict, the judge told us that the case had already been tried once before. It was declared a mistrial because the jury couldn’t agree.

The best part about deliberation was that we had to follow through on what we’d promised in front of the court. No, we would not allow past transgressions to color our judgment. No, we would not consider one human’s word more trustworthy than another’s. We argued. We pointed out each other’s prejudices. We grew frustrated. We changed our minds. Eventually, the twelve of us agreed. The evidence provided during the trial was not enough for a guilty verdict.

Some things are worth arguing for.

The Story of a City

A city is made up of stories, and not just the stories you find in buildings. Make no mistake: the story of your city is being told in the courtroom. Which cases get tried, which ones get dismissed, which perpetrators get caught, and which ones go free. This is what “The Wire” gets so wonderfully right, season after season. It’s not just the story of a few cops. It’s the story of cops, drug dealers, dock workers, teachers, and politicians. It’s not a story of “us” versus “them.” It’s just a story of us.

You might have already guessed that serving jury duty ended up being one of the most meaningful experiences of my life. You might also guess some of the lessons contained therein. Yes, jury duty is an important civic responsibility. Yes, you realize how incredibly lucky you are. Yes, you meet people you’d never meet otherwise. Those reasons alone are worth the inconvenience.

But I think that we, as writers (and humans) can ask more of ourselves than that. The deeper I go into the writing life, the more I see that my creativity is an outgrowth of who I am—not only in front of others, but when I’m alone, when things are inconvenient.

That night after the trial ended, a young man slept in his own bed, free for the first time in two years. Not far away, the victims’ family went home, likely feeling cheated. For them, there was no closure, no happy ending, just loss.

The characters we create live only in our imagination and in the pages of our books, which is why we writers need to engage in our surroundings as often as we withdraw into our own minds. The more we put our work in proper perspective, the more useful to the world we become. Art is a support for life, not the other way around.