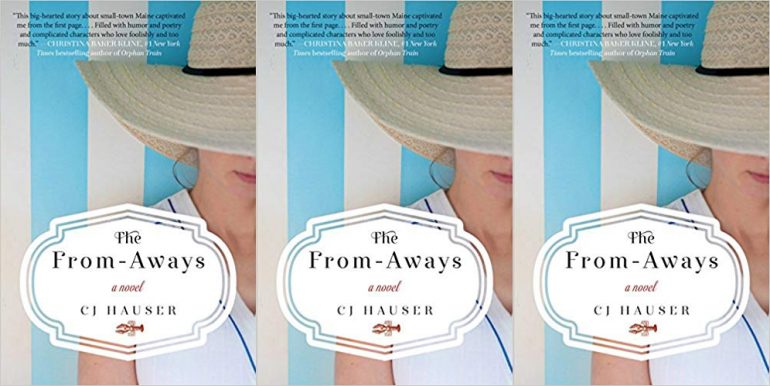 CJ Hauser’s evocative debut novel The From-Aways will take you deep inside small-town New England, a budding friendship, and troubled family ties. It’s a whip-smart and heartfelt book. It also shares some common ground with the fan-favorite television series Gilmore Girls, and below CJ and I discuss the show, as well as her novel, the nuances of small town life, and the myth of belonging.

Q. Both The From-Aways and Gilmore Girls explore the breadth of female relationships. How did you decide to place Leah and Quinn’s new friendship at the heart of the novel?

A. The true story? I started writing the book with just Leah. Then, in a sulky fit, I threw it out because it wasn’t good enough. I started the book over, with Quinn. In a sulky fit I threw that out because it wasn’t good enough either. Then I poured myself a whiskey even though it was four in the afternoon and I sulked some more. When my best friend and roommate came home from work she retrieved both chapters from the trashcan and read them. Do you realize, she said, that you should write about both of these women? I think they would be friends.

And she was right. I realized that neither of the women could tell this whole story on her own. Each needed to push the other into making different, difficult decisions. They made each other better because they were these two different halves of a pair, and I like to think that made the book better, too.

Q. Much like Lorelai and Rory in Gilmore Girls, your novel belongs to both Leah and Quinn. How did this dual approach open up the story for you?

A. I was in high school when Gilmore Girls first aired and it felt like a revelation. It was the first time I’d seen smart, fast-talking women on TV. The first time I felt a show moving at a pace that was engaging to watch instead of dragging out so excruciatingly that I wanted to shout at the television: trust me to be smart enough to keep up!

I fell in love with these characters: women who had been through dark things but were laughing in the face of it all anyway—cynical and big-hearted at the same time. As a reader I always take joy in seeing characters volley a conversation between them, whether that means a scene or the storytelling arc of a whole book. With each hand off, something gets twisted, changed, and there are more chances for surprises.

Q. The troubled bonds between family members cause tension for Leah and Quinn throughout the novel. What impact do these shifting relationships have on the rite of passage into adulthood?

A. Will you forgive me if I lay some Hemingway on you? You’ll just have to: “The world breaks everyone and afterward many are strong at the broken places.” That man was wise and broken both. I think this is at the heart of The From-Aways: both women are trying to cobble together families, to love people well, but the truth is that you can’t do that without suffering. You can’t become a grown-up without getting broken and healing up a million times over. You can’t create a real family, or relationship, without doing that either. At one point Quinn says she thinks she and Carter needed to be all busted up first so that they could heal together into a single family. This is the process the ladies are going through.

Q. Just as the town of Stars Hollow became a beloved character in Gilmore Girls, Menamon takes on a life of its own in The From-Aways. How did you go about imagining such a unique and memorable fishing town?

A. This is my first novel and, unlike the short fiction I’d written in the past, I knew this was a chance to create a really immersive experience for readers. My mother has called me a magpie since I was a child and that’s how Menamon got built, like a crazy bird’s nest. I pieced together scraps of things I had seen, in Maine, in my own hometown, in stories. I invented things, and piece by piece the town grew. I really hope readers will feel like they’ve visited someplace specific and special when they read the book.

Q. As I read your book, I couldn’t help but reflect on this idea: to know a town is to know its locals. In your mind, what role do the supporting characters in Menamon play?

A. There is no book without them! Gilmore Girls was the first show I’d ever seen that really nailed this aspect of small town life: the way everyone is all up in each other’s business and how that’s both wonderful and terrible at the same time. Living in a small town often feels like a very long car ride with several dozen of your neighbors: no matter how much you love them they’ll start to drive you crazy, and there’s no way to avoid the inevitable conflicts that crop up.

You don’t really know a place until you know the guy at the fish shop and the local bartender and the person who lives on the corner who used to be a folk-singer and the pretty waitress everyone moons over and the several generations of stories that trail behind those people like comet tails. You just don’t.

Q. I also found myself wondering about the nature of loss in a small town or community. The grief of one is felt by all. What do you think this dynamic has to offer the larger world?

A. The darker things that have happened in my hometown, the people we’ve lost and grief we’ve felt, are part of our community DNA. So many communities experience tragedy together and it’s this as much as shared geography that creates a community where people feel a sense of connection and consequence.

I think it’s important for us to stretch ourselves to extend that kind of empathy to people beyond our borders. Will things get all cross-over confusing if I pull in another TV show? There’s an episode of The West Wing where President Bartlett asks Will Bailey: “Why is a Kundunese life worth less to me than an American life?” and Will Bailey says “I don’t know sir, but it is.” That’s such a troubling idea. It shouldn’t be so.

Q. Lastly, so much of this tender-hearted novel is about the notion of belonging—how we belong to a place, to a people, and to each other. Is this idea mere myth or are the lucky among us able to find it?

A. I think about this often because I come from a place like Menamon, and I sometimes worry that I won’t find that kind of place again.

These days I live in Tallahassee, Florida, a place I never thought I’d set foot in, and for the first time this April I wasn’t at home with my family for Easter. So I had friends over for an Easter dinner at my place. We were a motley crew. There was everything from grilled lamb to devilled eggs to shrimp curry. Someone brought bubble gum. Some people brought their own chairs because I didn’t have enough. There was a lot of drinking and toasting and laughing.

I think maybe this idea of place and belonging doesn’t look the way it used to. I think it’s changing, but it’s not a myth. After Easter, this much I know for certain.