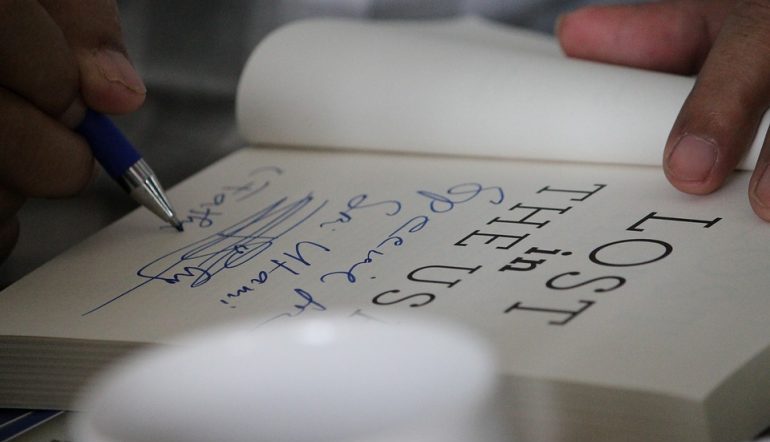 I’ve spent the past few weeks preparing for the publication of my first book this fall, and a key ingredient of this process is the “public” part. I’ve been updating my website, beefing up my social media presence, and reaching out to people to spread the word about the book I believe in so passionately.

On good days, I see that I might be evolving into a more potent version of myself—a writer who is able to talk about her own work articulately, one who can move seamlessly between her public and private worlds. On tougher days, the whole thing can feel fake, like I’ve been hired to portray myself in some sitcom or drama loosely based on my life. Despite the best intentions, opportunities for fraudulence arise at every turn. Can I make myself look stronger, wiser, funnier if I try hard enough?

In essence, I suppose what’s developing is my writer’s persona. And to be honest, it frightens me a little. I’m finding that this kind of activity is contrary to the artist’s life, the kind that forfeits contact with the outer world in order to delve deeper inward. It seems I can’t manage to do both at once. I can’t write a new project while determining how to market the first one.

Thinking about this struggle led me back to one of my favorite essays, “Saving the Life that is Your Own: The Importance of Models in the Artist’s Life,” by Alice Walker. I like to re-read it when I feel creatively lost. In the essay, Walker imagines Vincent Van Gogh sitting at his desk, penning a letter to his brother in which he writes:

“. . . I myself am suffering under an absolute lack of models.”

At the time, the artist was working on five canvasses of olive trees. This, then, has become part of his persona: despite financial, emotional, and physical hardship, Van Gogh was a working artist. He died six months after writing these words, and he only sold one painting during his lifetime.

These aren’t new details, of course, but the way in which Walker considers them invites me to imagine her sitting at her own desk in 1976, crafting essays, poems, and novels—and that image, as much as her very writing, has proved a model for me time and again. In my head, she’s gained a particular persona, someone who writes in the midst of personal and political turmoil (not unlike my image of Van Gogh), someone who’s able to find her center at the most difficult of times.

In many ways, Van Gogh’s persona has been created for him posthumously. A troubled man, a poor man, a brilliant man, an under-appreciated man. The guiding principle of the artist’s persona is this: to be interested in an artist’s work is to be interested in her life, and vice versa. And my life may not be so interesting, but I take comfort in what Flaubert wrote:

“Be regular and orderly in your life . . . so that you may be violent and original in your work.”

But can “regular and orderly” a strong persona make? Perhaps it’s the illusion that we can control public perception that we must surrender before finding our way. I doubt very much that either Van Gogh or Alice Walker spent much time thinking about how their artistic personalities were perceived apart from the work they produced. I doubt even more if these images and impressions we have of famous artists are accurate at all. But it seems now that an important part of selling one’s art is having the “right” personality to sell along with it.

Here’s the downside: if we’re guided solely by this entrepreneurial eye (and therefore surrender our artistic one), we run the risk of losing what gives our work merit in the first place–that honesty so committed to itself that all ego or insecurity on the writer’s behalf disappears. Instead, we become overly concerned with how things appear. The right vocabulary becomes unduly essential. We don’t collect items or lists of books or inspirations; we curate. We don’t give opinions; we offer cultural critiques. We dare not network, per se; we act as good literary citizens. The language alone can make your head spin. In time, your work flattens and becomes sycophantic. You are better at playing the writer than being one.

But here’s the upside: writers create authentic personas all the time.  Readers are quick to snuff out inauthenticity and pretense. Being able to connect with your audience is an incredible gift. So often larger conversations surround today’s most groundbreaking literature, and taking part in those discussions allows us to see our projects take on lives of their own, to join the chorus that creates the music of our generation. So if you are someone who knows the artist inside you is strong, yet the person might be timid, take heart. The image of an artist writing at her desk or painting a series of olive trees still has the power to inspire and move future artists decades or even centuries later.

So how can our public personas and our private lives work in concert rather than create a duplicitous self? As with many things, perhaps the answer is found in the asking. When an artist writes a memoir, for example, one of the first tasks she undertakes is to start thinking of herself as a character. As a character, she is no longer herself. She is the narrator. She is creating a distance within herself, stepping back to regard her own memory with as inerrant an eye as she can muster.

Is the character “her?” Yes. Is it all of her? No. It’s akin to having a writer’s persona that’s somewhat distinct from the person who lives in your writing room. You can be both because you are both. And then when the book makes its way into the world, you meld the two, project it outward, and hope that it will serve as a sweet-smelling perfume that will attract passers-by and invite them to follow the scent back to its source.