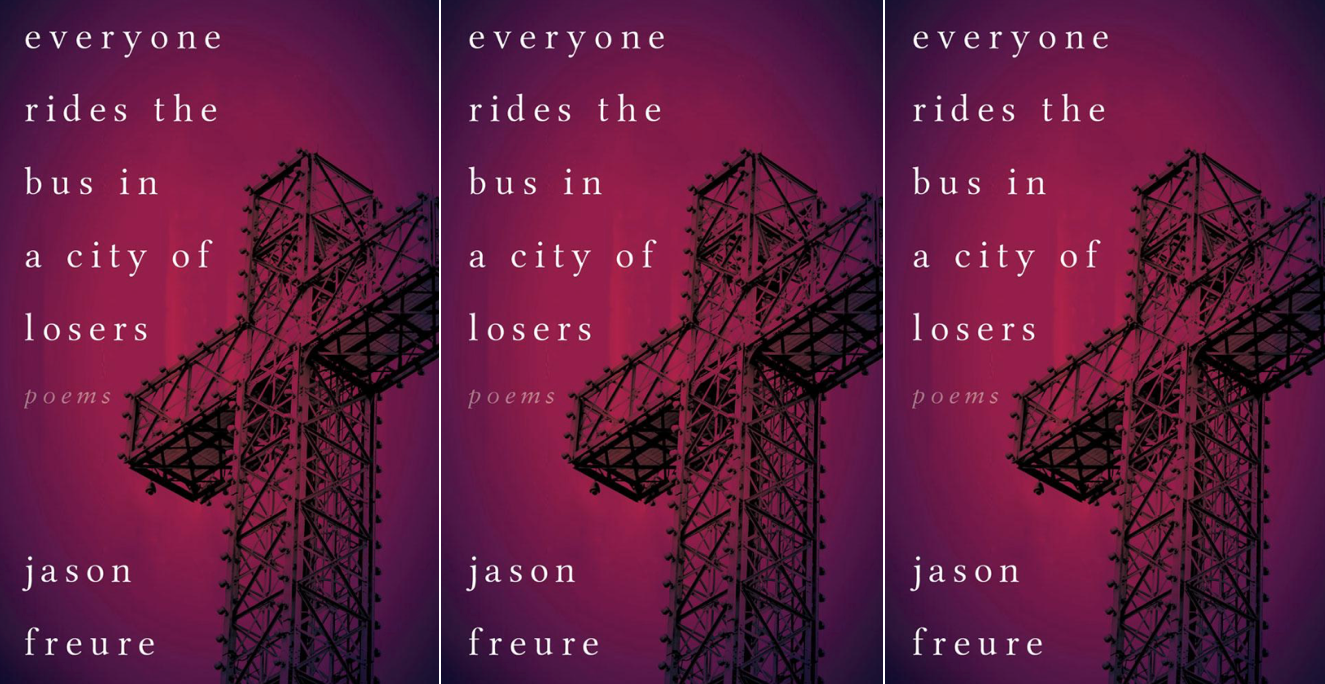 Everyone Rides the Bus in a City of Losers
Jason Freure
ECW Press | September 25, 2018

In the poetry world, a current trend is poetry centered upon place. Jason Freure’s debut collection of poetry, Everyone Rides the Bus in a City of Losers, explodes this mode of writing in its intimate look at the city of Montréal, Québec. Readers see the city through the eyes of a speaker who has become an insider—in the sense that he lives in and is intimately familiar with the metro lines and neighborhoods of Montréal—but is also still very much an outsider, who has long ago shed the romanticized lens of the tourist (if he did indeed ever see the city in this way). With a voice reminiscent of Ezra Pound’s “In the Station of the Metro” and T.S. Eliot’s J. Alfred Prufrock, the speaker invites readers to “see” his city in all its dirt and grime. His tone is sometimes disillusioned, sometimes sardonic; at other times it is droll and playful. In a poem near the end of the collection, “On McGill Ave,” the speaker notes of himself and a friend:

[n]either of us moved here to forget our friends
but to trade insomnia for 24/7.
Today, I know more of the city’s many sides,
its second floor secrets, its hiding places, cellars,
its dead-end lands and afterhours lofts

And yet, what also surfaces throughout the poems is the hidden grandeur found in the dive bars, coffee shops, and restaurants, and their significance to the speaker. Those unfamiliar with Montréal are whisked into a world that locals know well. Locals know, for example, why, as one poem title says, “No One Goes to Prince Arthur Anymore” and the kind of art scene one can find late nights at Le Cagibi. The book’s title comes from a quotation questionably attributed to London Prime Minister Margaret Thatcher, in which she reportedly said, “A man who, beyond the age of 26, finds himself on a bus can count himself as a failure.” But in Montréal, according to Freure’s speaker, everyone is a loser in the best sense of the word.

Unique to the world Freure builds in Everyone Rides the Bus in a City of Losers is the layout of poems. The book is broken into four parts, for each of the four metro lines that run through the city, and the poems in these sections bear the names of each of the stations along the line. The poems are flavored with allusions to the places, cultures, and neighborhoods that define these stops. In the first “Berri-UQAM” poem (in the “Orange Line” section), for example, the speaker calls the stop “the heart of the world,” as it is a place on the metro route through which three different lines pass. Later in the poem, readers find the distinctive blending of culture and language to be found in Montréal, as the speaker repeats Berri-UQAM’s centrality in French: “au coeur du monde.” This stop is also, as the speaker notes, a haunt for both filmmakers and university students. The poem ends with the speaker’s own experience of the station: “Berri-UQAM, under beggars and statues, / I’ve hopped your turnstiles, run for your sweepers. / Now hide me from my doctors, my creditors, / my bosses, my friends.” In “Place St- Henri,” the speaker reflects on the metro itself: “Somewhere subterranean, a city’s spirit is elusive… / Whether it wears long chiffon or a denim ensemble / depends on the station of the search.” For some stations Freure writes stanzas, but others are summed up neatly in witty couplets, such as “Jean-Talon,” a station on the Blue Line: “Of all four lines, the Blue Line is Montreal’s appendix. / Ostensibly useless, but a good home for gut flora.” “St-Michel” gets a monostich: the book’s title.

What surfaces in the reading of these poems is the speaker’s ability to see “through” the city. He occupies the lonely places of Montréal, but from these perches he seems best able to observe what is easily missed. The opening poem, titled “Ultramar,” a gas station chain in eastern Canada, reveals the speaker’s somewhat insular existence on the island city that is Montréal:

I bid my friends adieu at Ultramar.
They claimed Verdun was the middle of nowhere.
It’s only the edge, I said to them.
Nowhere is somewhere west, out past the neon
5e Avenue on the New Verdun Diner.

The closing poem, “Sud-Ouest,” named for a borough of Montréal, bears a similar theme. The speaker identifies a distance between himself and the city he’s become so familiar with:

The city hides from me. It is frightened.
It turns its shoulder, lets me know
I am not welcome to stumble shouting from its buses
or spit on its cab drivers grubbing nickels
from my pockets. It will not keep me
safe from dawns spent puking on subway cars.

Yet, while the speaker is aware of his city’s uglier facets, he is also proud of it. It may be a fact, for example, that St-Laurent Blvd is so overcrowded that “[t]here is no place for panhandlers. Nobody walks. / There is no room between the buses, trucks, / bulldozers, snowploughs, and broken slag,” but it is also true that the Yellow Line terminates in a station off the island, leading the speaker to remark, “Leaving the island is like leaving behind hope / and letting go of dietary idealism.”

Through his exploration into the diversity of his city, as rendered through descriptions of metro stations, neighborhoods, and local establishments, Freure’s speaker has created for readers an unrepeatable experience of Montréal, and has managed to render it both familiar and unfamiliar, even to those who have lived there their whole lives. Those uninitiated to this dynamic city may need to do a little research of their own as they read Everyone Rides the Bus in a City of Losers, but the poems reward the careful reader. Freure makes attractive the learning of this city on foot, and as the speaker suggests at the end of “The Pedestrian,” it is both lonely and beautiful to learn a city this way:

I have been walking for many hours and do not know what I want anymore,
where I should stop or why, why I should ask for more disappointment,
why I should find a reason to hurry off again when I can keep walking.

Tags:Everyone Rides the Bus in a City of Losers, Jason Freure