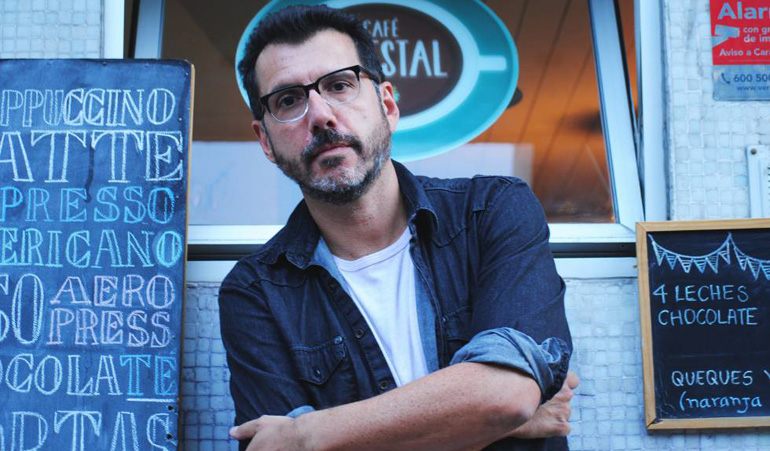 I’ve been thinking too much about reality entertainment lately. It was inevitable that I would find myself reading Alberto Fuguet’s The Movies of My Life (Rayo) this summer—this summer of House of Cards-like congressional hearings and plotlines, this summer of Russian spies and the Paris Climate agreement debacle, and the fact that there’s an actual reality TV star in the middle of it all. In short, I’ve been wondering: how does a country cope with disillusion? Or rather, how does a person deal with its dissolution?

To be accurate, these questions are not at the crux of Fuguet’s The Movies of My Life, though the tropes surrounding them are prominent within the book. The novel centers on the protagonist, Beltran Soler, a seismologist and misanthrope who has largely shielded himself from the trauma of the world by losing himself in theoretical seismology. But everything changes when a chance encounter with a woman on a flight from Santiago, Chile, to Los Angeles, California, (en route to a seismology conference in Tokyo) triggers an unpacking of memories from his largely unexamined life through fifty films that expound upon everything from Beltran’s émigré life in California to his return to his birthplace of Santiago to Salvador Allende’s death to life under Pinochet’s Chile.

At the head of each chapter are headings that detail the movie seen, the director, and the place and time in which Beltran had seen it. Beltran writes these essays with the intention of, presumably, sending them to the woman he met on his flight from Santiago. Instead of flying on to Tokyo, he bunkers down in a Los Angeles hotel and within short distance from his childhood home of Encino. What ensues is a character study in fifty memories—some banal, some traumatic, but all of them resonating with the texture of life as lived through a child’s eye, even those memories associated with late adolescence or adulthood.

One of the more poignant essays is associated with the movie Soylent Green directed by Richard Fleischer. The film takes place in New York in the year 2022. The city is devastated, and nine-year-old Beltran makes the link upon his landing between the fictional New York of 2022 and the Santiago that he finds in front of him.

Beltran recalls the image of his grandfather buying the paper on their way home from the airport. He remembers the headline reading, “PINOCHET: WHOEVER DOESN’T APPRECIATE THE HEAVY HAND, GET OUT.” He then segues into the great reveal of the film: “It’s assumed that Soylent is a combination of lentils and soy beans but, ultimately, Heston discovers Soylent Green is made out of surplus human beings.”

Of course, Chile’s dirty war is only vaguely alluded to here. But it’s this kind of interplay between entertainment, personal memory, and political context that’s increasingly intriguing to me the further we move into 2017 where our reality TV has quite actually (and suddenly) become the mainstream political and the personal—all of it one and the same indivisible reality. One can’t help but wonder what led up to this? And existentially how do we, as citizens, cope with disillusion when echoes of it ring out everywhere? In the news, in our sports, in reality TV. Is there refuge? And if so, what does that look like?

If Beltran, the protagonist, teaches us anything it’s that it might just look like the texture of our own extant lives, our own personal dramas infinitely more interesting and formative than the context (sometimes) in which we find ourselves, though also derived from that context as well. There’s something reassuring about that—the idea that I can only live this moment I’m living in and that’s it. I can only change what I can change. In effect, it’s only in memory that we can gain the larger gravity and value of the moments that have formed us.

It feels like every day we’re unpacking some new trauma, some new earth-shattering legislation or event that’s forever altering not only the reality we live in but the people we’re becoming if we dare to examine the undercurrents in our own lives.

Americans might find less sympathy from countries who have lived through similar trauma before, Chile being one of them. But then I wonder, is it fair to say anyone has lived through anything quite like this before? Like what Americans—and really the world—are living through in the present? Not to say lived through the macro elements of what we’re seeing—the strongmen, the consolidation of power, the war on the American free press, etc.—but the way in which the misfortune we might be experiencing is, in part, brought on by the very entertainment that distracted us from looking too closely at this kind of trauma in the first place.  Specifically, I’m talking about our American cravings for reality TV and how that’s shaped everything: our insatiable desire for disaster porn news cycles, our hypercurated social media, our continual refreshing of Twitter feeds in the doctor’s office, and underwriting all of that, our incredible human desire to stay connected to one another.

Was it our seemingly innocuous American cravings that led to this? Or was it the more tragic and simple desire for human connection that built our echo chambers and pushed us further away from some collective truth? Perhaps some combination of both (and more). But then, maybe not knowing, or striving to know, is the whole point.

As Beltran had a moment of reckoning, maybe 2017 is ours. Our time to turn off the TV, look dissolution in the eye, and then feel that transformative discomfort.