Home
»
Critical Essays
»
Expecting the Fish of Anguish: For the Love of the Non Sequitur 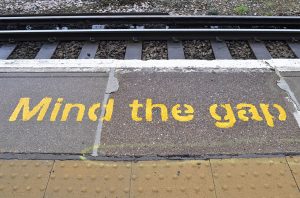 If you’ve ever studied debate or formal logic, you’ll know that the non sequitur is considered a logical fallacy, a lapse of reason that renders an argument invalid. More generally, we’ve come to think of a non sequitur as two or more statements that seem to have no relationship to each other–like being trapped inside a comedy set by Steven Wright, or a series of jokes made up by a small child. (Take my children–please.)

But the non-sequitur is having a major moment in poetry. A great deal of poetry, and maybe even all of it before the twentieth century, concerned itself with rhetoric, setting up and following through with some kind of an argument. Shakespeare’s sonnets are a classic example, buttoning up the case each poem makes with those pristine final couplets. But as a kind of neo-surrealism continues to sink its hooks deeper into our poetry, poets rely more and more on the spark and surprise of the non-sequitur. Like the metaphor, it relies on fresh juxtapositions, and can help a poet shake off the strictures of the highly rhetorical poem.

Before I get to twenty-first century ways that the non sequitur is used, here’s a classic example from the originals—Paul Eluard, in his 1926 poem about Max Ernst. Here’s the whole thing, as translated by Mary Ann Caws:

In a corner agile incest

Circles the virginity of a little dress.

In a corner the sky turned over

To the spines of the storm leaves white balls behind.

In the brightest corner of every eye

We’re expecting the fish of anguish.

In a corner the car of summer

In the light of youth

The first one shows its breasts that red insects are killing.

As you can see, even poems that make dazzlingly strange leaps like this one, often don’t erase a rhetorical scaffold entirely. The repetition of “in a corner,” for example, is a way of keeping tally of images, and in a poem about a visual artist, Eluard may literally also be referring to what can be seen on a canvas or piece of paper containing Ernst’s work. And there’s a difference, of course, between a strange metaphor, like the “fish of anguish,” and a non sequitur, but this poem has both, and makes surprising juxtaposition in its subject, along with its method.

In Hannah Gamble’s “How I Lived For Several Months,” the poem opens with a non sequitur, disappearing into it. Like a metaphor, it sets up the poem as two halves: the opening couplet, and the rest of the poem. It’s the reader’s job to try to understand what relationship exists between the two:

no one trust the things I’m saying.

to say that I’m a television show.

I apologize first, then try to be proud of myself

for being so entertaining.

The poem proceeds to look self-deprecatingly at the nature of friendship, particularly those friendships that are tested when one person is in the throes of life drama; as the speaker notes, “ people will love their friends less / if their friends behave like a television show.” The poem ultimately concludes that the best relief often comes in the form of a “friend from out of town” who hasn’t been privy to the speaker’s months of turmoil. This friend is the only one capable of forming “a kind opinion” because “she has never owned a television.” As with Eluard, Gamble’s speaker isn’t totally uninterested in a rhetorical argument. But by cutting away what might be considered traditional rhetorical scaffolding at the poem’s opening, the mystery and surreality propels the speaker toward the ending.

Kaveh Akbar’s “Gloves” also makes use of the non sequitur, but is even more unmoored from a rhetorical framework than Gamble’s poem. “Gloves” begins:

How long can you speak.

Without inhaling. How long.

Can you inhale without.

Its ass at us. Twirling in its silver.

Cape. I want to kiss.

Your scalp. I want you to kiss.

My friends. Can you see the wet.

The poem feels like a telephone conversation that the reader can only hear one side of, as if the non-sequiturs would sound perfectly natural if we could only hear the beloved’s voice replying on the other end of the line. In Akbar’s case, the jarring nature of the leaps is combined with the jerking brakes of those periods, evoking an intense experience of—falling in love? Perhaps the dangerous throb of lust? But the mention of “History” and the speaker’s later declaration, “Today I answer only. / To my war name” gestures outward. If traditional rhetorical meaning is difficult to come by, it also seems beside the point. In this case, the non-sequiturs evoke something visceral, bodily. They make the poem experiential: they make it lived.

Why is the non sequitur having such a moment in contemporary poetry? Perhaps in times like these, when the work of making sense of the world around us gets harder, we need poetry that points toward that difficulty—and that makes that work worthwhile.