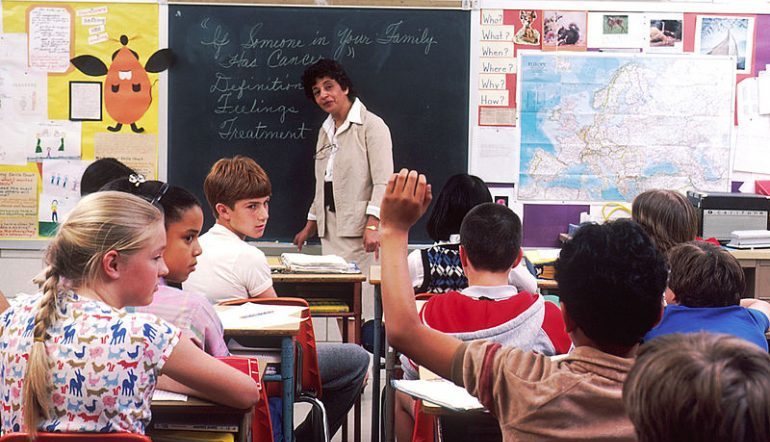 The sinister Jean Brodie continues to bewitch: decades after the publication of the novel that bears her name, the myth of her humanism persists; she has long been shorthand for a strain of idealism and independent thought that she never represented in the first place. The Prime of Miss Jean Brodie, about a controversial teacher and the rebellious pupils in her charge, is often categorized alongside more conventional novels and films set in the classroom—stories about inspiring educators and their unformed and stubborn, but ultimately obedient, students—and is even treated on occasion as one of the genre’s progenitors. It’s a dubious distinction for a book that so gleefully scorns the ideas it’s credited for popularizing. Why, after all these years—and a play, and an academy award winning film adaptation—can we still not get a handle on Jean Brodie? Because Muriel Spark wanted it that way.

First time readers burdened with the expectation that they are encountering The Dead Poet’s Society for women are sure to be astounded: Miss Brodie is charming and shallow, generous and tyrannical, curious and cruel. In an early passage, the insightful Sandy reflects on the way another student is continuously rejected by her cohort for the sake of everyone else’s belonging:

“Then suddenly Sandy wanted to be kind to Mary Macgregor, and thought of the possibilities of feeling nice from being nice to Mary instead of blaming her. Miss Brodie’s voice from behind them was saying to Rose Stanley, ‘You are all heroines in the making. Britain must be a fit country for heroines to live in. The League of Nations…’ The sound of Miss Brodie’s presence, just when it was on the tip of Sandy’s tongue to be nice to Mary Macgregor, arrested the urge. Sandy looked back at her companions, and understood them as a body with Miss Brodie for the head. She perceived [them]…in unified compliance to the destiny of Miss Brodie, as if God had willed them to birth for that purpose.

“She was even more frightened then, by her temptation to be nice to Mary Macgregor, since by this action she would separate herself, and be lonely…So, for good fellowship’s sake, Sandy said to Mary, ‘I wouldn’t be walking with you if Jenny was here.’ And Mary said ‘I know.’ Then Sandy started to hate herself again and to nag on and on at Mary, with the feeling that if you did a thing a lot of times, you made it into a right thing.”

As a reader, you begin to question your own perceptions, but like Miss Brodie’s wary students, you second guess yourself. Her monologues about Giotto seem vapid; maybe you don’t know enough about art. Her personal narratives about her dead fiancee seem solipsistic; maybe it becomes important later. And then she praises Mussolini—perhaps this is one of those things we dismiss, magnanimously, as a “product of its time?” (The novel was written in 1961). Even upon rereading, even upon reflection, you’ll have doubts: this is a novel that can’t be outsmarted.

Miss Brodie’s interest in fascism is one of the novel’s more tantalizing themes. Her admiration presents itself early, in a flashback, as Sandy observes the Brownies and Girl Guides, and recalls their similarity to the fascisti whose photographs Miss Brodie fawningly displayed in her classroom. Although alarm bells will ring for any adult reader, the ten-year-olds repeat their instructor’s sentiments passively, just as they do for her lectures on manners or John Knox. Until it motivates the book’s climax, it’s discussed with chilling irregularity. It’s background noise, a feature of ordinary life in 1930s Edinburgh—at least, for the students of one Jean Brodie.

The first time I read the novel I read the fascism as pure synecdoche—Miss Brodie is obsessed with fascism because she is a fascist, and so, therefore is her program of education, and perhaps (I imagined Spark thought) education in general. But if it were really this simple, the novel’s message (and its slippery central character) wouldn’t be so difficult to pin down. The scant glimpses we get of Jean Brodie after the war’s end are almost anti-climactic. With Europe rising from ruins around her, she shrugs off her previous support of Mussolini and Franco and calls Hitler “naughty.” When her death is alluded to, it seems like the unremarkable passing of a woman in her 60s to more or less natural causes. She’s not felled by an assassin, and she doesn’t take her own life. All we know of her later years is that she was obsessed with a futile investigation into which of her former students betrayed her to her superiors way back in 1939.

But The Prime of Miss Jean Brodie is not about the allure of any particular noxious idea as much as it is about allure itself, the ease with which people take refuge in their own blind spots, and the way our thoughtless (often social) loyalties to facile modes of thought can force us to act in bad faith. Because Miss Brodie is unorthodox, we want her to be radical. Because she is cultured, we want her to be wise. Because she is nearly brought down by Presbyterian conservatives, we want her to prevail against social injustice. But she is none of these things. One of the finale’s many ironies is that after Miss Brodie survives an ugly smear campaign she doesn’t deserve, she’s brought down by a betrayal she does—though even this is ambiguous: there’s a nagging sense that her traitor’s accusation is just an excuse, covering yet another personal vendetta.

The most illuminating scene Spark delivers, as far as power is concerned, comes when the Miss Brodie chastises her absent bosses—and, by proxy, former prime minister Stanley Baldwin—in front of her class: “This was the first intimation, to the girls, of an odds between Miss Brodie and the rest of the teaching staff. Indeed, to some of them, if was the first time they had realized it was possible for people glued together in grown-up authority to differ at all.” Were Miss Brodie (or for that matter, any authority) unassailable, the girls’ education would only require supplanting the binary of “teacher vs student” with “enlightened vs unenlightened.” Spark is less concerned with any specific, fully developed system of dangerous thought than she is with the ego and blind loyalty that undergird all such systems, equally. It’s no mistake that as an adult, Sandy (converted, cloistered, renamed ‘Sister Helena’) writes a book about “moral perception”. Grappling properly with the contradictions that weave through Spark’s novel cause the scales to fall from one’s eyes.