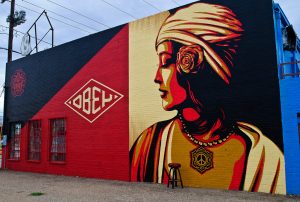 Nearly a year into the Trump Administration, writers have observed government officials descend into a Twilight Zone of twisted facts, alternative realities and outright lies. Not even a year ago, the White House Press Secretary insisted on the existence of inauguration guests not captured by photographic evidence. As the Trump Administration gathered steam, it removed scientific data from public websites and invented historical events that never occurred. The President himself lies with such frequency that the New York Times is compelled to keep a list, complete with elegant graphic treatments.

In the face of unprecedented unreliability from official sources, literature has stepped in to fill in the void. Literary fiction in 2017 dove into the present sociopolitical culture, expounding on the gritty realities that the Trump Administration obscures. Socially relevant fiction this year resonated with readers hungry for truth.

Lisa Ko’s The Leavers, for example, offered a poignant and incisive take on immigration, earning the PEN/Bellwether Prize for Socially Engaged Fiction as it shattered the myths spun by a President who never managed to build his promised wall. While Trump launched his campaign with gross generalizations, lumping a nation of individuals into one ugly stereotype, Ko zoomed her lens in to focus on a single boy, Deming Guo, and the rich and complex family he struggles to fully understand. As Gish Jen writes in a review for the New York Times, “Ko has taken the headlines and reminded us that beyond them lie messy, brave, extraordinary, ordinary lives.”

Perhaps as a means of distraction from his policy failures on immigration, the President has made it his mission to keep a spotlight on race, feuding with Black athletes and their parents while his Attorney General set out to dismantle any hope of police reform. Against that backdrop, Angie Thomas’ stunning debut The Hate U Give, inspired by the Black Lives Matter movement, spent 25 weeks on the New York Times’ bestseller list and was the second most-added title to Goodreads in 2017. In Thomas’ novel, 16-year old Starr Carter is a witness in every sense of the word. A witness to the police violence that takes the life of her friend Khalil, she serves a formal function in a court of law, but also an informal role, giving her testimony of a truth many at her majority―white private school would rather not see.

As Trump and his Cabinet deny the racism that snakes through their own rhetoric and the government they are building, the literary world has shown a greater willingness to confront the trauma that shapes our nation. In the searing Sing, Unburied, Sing, Jesmyn Ward breathes life into a Black family “pulling all the weight of history.” In a piece calling Ward the “heir to Faulkner,” Time magazine notes that “brutally relevant concerns shape the narrative and characters” in the novel. For this work, Ward earned her second National Book Award. It is notable that Ward took home the prize in a year when 15 of the 20 finalists were women. The prominence of women’s voices in literature resonated as the occupant of the Oval Office was denied the reckoning due to so many other high-profile perpetrators of sexual harassment, assault, and abuse.

Perhaps the most prolific American purveyor of empathetic, deeply felt female-centered stories, Roxane Gay published a memoir and a book of stories this year. Her collection, Difficult Women, is, as the Guardian notes, also about difficult men, including abusers, harassers, and criminals of all types. The book includes the stories of more than 20 different women, each building on the last. A January release, the collection kicked off a calendar year that ended with a global #MeToo movement, where real-life women leapt as if from the page to echo and amplify each other in unprecedented ways.

Author Anne Helen Petersen also lifts these voices in Too Fat, Too Slutty, Too Loud which received an NPR Best Book of 2017 stamp. Chronicling “the rise and reign of unruly women,” Petersen draws from examples in pop culture to insist on the centrality of the female voice by identifying the specific mechanisms most often used to silence it. Petersen dissects the ways well-known women are dismissed (and worse) if they don’t fit into traditionally accepted packages, a critical study from an author with a doctorate that reads like a takedown of Trump himself, given his documented, decades-long history of judging women based on their appearance.

Literature can be an escape from a tumultuous world, a safe place to hide or another planet to live on. But the most awarded and most popular books of 2017 chose a different path: they spun truth out of the lies offered by those in power. In a year marked by misinformation, the most brutal honesty was found in our books.