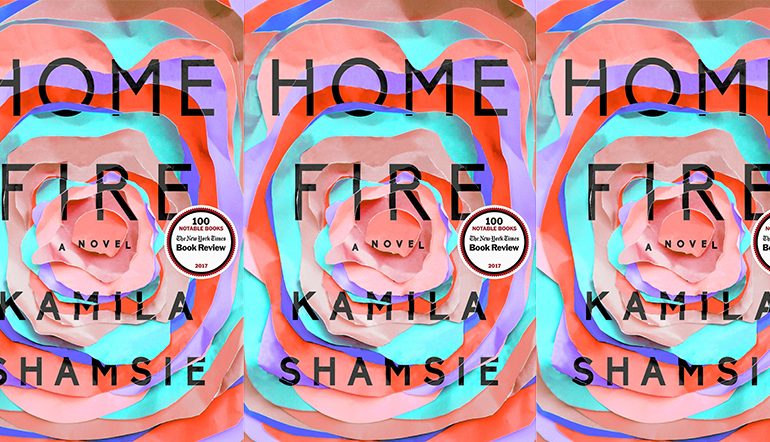 In her most recent novel, Home Fire, recently awarded the Women’s Prize, Kamila Shamsie moves Sophocles’s Antigone to contemporary London, besieged by the warring threats of Islamophobia and the War on Terror. As Hanif Kureishi, another great chronicler of British Asian immigrants, writes, Antigone is a play about the “necessary tension between the state and the people, the family and the individual, man and woman.” Like Mohsin Hamid and Ayad Akhtar, Shamsie is similarly concerned with the ways a post-9/11 West has disrupted the lives of Pakistani Muslim immigrants. But where Hamid and Akhtar limit their scope to the individual experiences of brown men, Shamsie maps out the ways the family reacts to and reflects the state, focusing on two opposing families—the Pashas, a tightly knit working class British Pakistani Muslim family, and the Lones, headed by Karamat, the ambitious newly elected Home Secretary who renounced his family and the British Muslim community for political sway with the white British bloc.

In novelizing the play, Shamsie breaks the narrative into five parts, based on five characters: Isma, the loyal sister who raised her younger twin siblings after their father died a prisoner of war in Guantanamo; Eamonn, the lanky, charming scion of the Lone family; Parvaiz, who follows in his father’s footsteps and runs away to join ISIS; his twin Aneeka, whose love for her brother leads her to seduce Eamonn to ensure Parvaiz’s safe return home; and Karamat Lone, who would sacrifice his family for the British nationalist cause. Both families live out the fates of their fathers—the Pashas’ abandoned his family for jihad, and Karamat sacrifices his own for the British state.

Antigone, too, is about the sins of the father—Antigone and her siblings live out the repercussions of Oedipus’s incestuous coupling with his, and their, mother. The play also demonstrates the troubling relationship between the state and the individual, how each resists the other in an ongoing exchange of fundamental questions of power, compromise, and the law. It’s this conflict, which Kureishi calls necessary to the function of democracy, that transfers readily from ancient Greece to today’s England. But the transposing of destiny and myth onto the contemporary political conflict is more complicated, and often less successfully executed.

Politics makes individual actions and desires difficult to parse. Like his father, Eamonn flaunts his secularism and is indignant of Muslims who critique Karamat’s policies. On his way to visit the Pashas, who live in a neighborhood like the ones his father grew up in, Eamonn’s memories of childhood visits to his great-uncle’s house on Eid is disrupted by his father’s presence: “He was nearing a mosque, crossed the street to avoid it, then crossed back so as not to be seen trying to avoid a mosque.” He’s inherited the politician’s awareness of optics, which governs his movements through London’s neighborhoods. But it’s impossible to control, which is why he zigzags through the street. When, in the midst of their affair, Aneeka reveals to Eamonn that she first followed him home because she hoped that his relationship with Karamat would help bring Parvaiz home safely, he feels hopelessly betrayed. Aneeka tries to assure Eamonn that she does love him (“I want to be here, completely. With you.”), but he’s unconvinced, unable to find the truth at the muddy intersections of family and politics: “It was what she’d say if she were still only trying to manipulate him. It was what she’d say if she’d really fallen in love with him.”

Each character uses the other to fill a familial hole, to find a home. Eamonn loves Aneeka, because she connects him to the home his father abandoned; Isma is drawn to Eamonn, because he reminds her of the brother who left and of the possibilities for a life outside of her family that she never got to see through; Parvaiz leaves home, because he wants to understand the father who left; and Aneeka sees in Eamonn a way to save Parvaiz. The family is a closed circle in Home Fire. When Parvaiz is killed in his escape attempt, Karamat refuses to repatriate his corpse to England on the grounds that the boy was an enemy of the state. Aneeka travels to Pakistan, where Eamonn’s body is, and sits with her brother’s corpse in protest of Karamat. Where in Sophocles’s play Antigone hangs herself out of desperation, and her lover Haemon then dies by suicide in turn, Eamonn and Aneeka are killed in a suicide attack orchestrated by Parvaiz’s former ISIS handlers. There’s a sad inevitability to it all, of two lovers unable to escape the confines of family and the state.