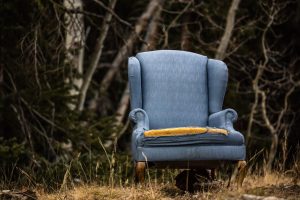 The unnamed narrator of Alice Munro’s “Family Furnishings” is told more than once that she is too smart. Paraphrasing her elders: “[the word] might mean intelligent […] or it might be used to mean pushy, attention-seeking, obnoxious. Don’t be so smart.” Against a backdrop of stifling family life in 1940s rural Ontario—“the food, flowers, and knitted garments […] of other women’s domesticity”—the young woman grows up in a smog of mutual resentment, mocking an uncle’s manner of speech and sneaking cigarettes while her aunts gossip about her chronically ill mother, whose career as a schoolteacher they dismiss as prideful. There is an echo of an earlier Munro collection, Who Do You Think You Are? —in whose title story a precocious protagonist is asked by her teacher precisely that. To grow up ambitious in a working class Canadian community, as Munro would make it seem, is to grow up with no shortage of contemptuous grown-ups holding you back.

But “Family Furnishings,” from Munro’s 2001 classic Hateship, Friendship, Courtship, Loveship, Marriage, is tricky. By its finale, Munro has indeed chastened, albeit gently, its heroine’s arrogant obliviousness to certain facts about her family. “You weren’t ever quite as smart as you thought you were,” another character tells her, and she is, in one painfully true sense, correct.

“Family Furnishings,” like many great stories about family histories, is about finding our way to the truth through well-worn myths. Its opening scene, a memory of two children making their way through a snowy field as bells ring throughout their town, is perplexingly uneventful. It concludes: “The world had burst its seams for joy […] it was the end of the First World War.” By the end of the story, Munro has blown this innocuous moment grimly open. One of the children is the narrator’s father. The other, his orphaned cousin Alfrida, or “Freddie,” the narrator’s de facto aunt. The story moves forward over a decade. As an adult, Alfrida appears mildly scandalous; she lives in “the city” (Ontario), writes for the paper, is the only woman in the family who doesn’t wear handmade clothes (she, in fact, wears backless dresses), smokes, and dates married men. She is, for the iconoclastic narrator, something of a role model.

A character like Alfrida provides an author an opportunity to sketch us a caricature, but from the earliest pages, Munro gives us a figure complicated by contradiction. Though never married, Alfrida’s newspaper column (“Round and About the Town, with Alfrida”) displays a quaint, practically stuffy etiquette about domestic life; she advises against improper wedding patterns and consoles young brides troubled with eczema. Munro offers us a few other peeks into an inner life that counters Alfrida’s seemingly free-wheeling exterior. She’s something of a closet reactionary, prevented from supporting Senator McCarthy only because of his Catholicism. It’s suggested she “distrusts […] foreigners.” In a later scene, she drops her silverware on her plate in disgust that the narrator has seen “that filth,” A Streetcar Named Desire.

The narrator’s mother occupies an equally ambivalent space. Though she never outright compares her mother with the uncles and aunts who judge her, there are hints of prudishness, as when her mother distances herself from Alfrida’s “cheap”-ness. And during a chorus of criticism the narrator recalls from her childhood, of the adults in her life trying to keep her in her place, she thinks of her mother alongside them, telling her: “You have a cruel tongue.” If we as the reader adopt her adolescent perspective to hear this, we see she’s as much an antagonist as they are.

By the story’s climax, Munro has slowly wheeled the narratives of these three women on their heads. Alfrida, it is eventually revealed, bore a child by her first cousin, the narrator’s father, the after-effects of which had wrecked her life; her play-acting at domesticity in the pages of her newspaper column was not as sarcastic as it seemed. It was not an independent spirit, but a lifetime of ostracism in a community that was ashamed of her, that sent her to Ontario with a married man, cramping a too-small house with her inherited “family furnishings” that she longed to put elsewhere. Nor is the narrator’s mother the stodgy matron who embarrasses her teenaged self. It’s hinted that it was perhaps she who was the one—her bookshelves stocked with Eliot, London, and Scott—who chafed most at her town’s restrictions, who scolded her daughter not so that she would be repressed but that she would not grow up, like her extended family, to be unkind.

Munro doesn’t place a value judgment on the choices either woman has made, or wished to make, or why she made it: on a deeper level, she is showing us that the lived experiences of these women tell us nothing at all about what they really wanted or what was available to them. The narrator does become a writer, and her reputation is secured in part by a story Alfrida confides to her about her own mother’s death. The narrator is struck by, and relates to, a moment of seeming arrogance in Alfrida’s childhood; in publishing this, it’s suggested Alfrida is deeply wounded. Knowing little else about the course of Alfrida’s secret history, the narrator doesn’t understand why. It is Alfrida’s illegitimate daughter, the narrator’s half-sister, who tells her at their father’s funeral: “She said you were smart, but you weren’t ever quite as smart as you thought you were.”

There have been other occasions when Munro wrote frankly about what it means to craft fiction out of the lives of people around us. It’s a credit to her empathy and imagination that in returning to the same themes, she never asks the question in quite the same way, or explores it via the same subject. In “Material,” from Something I’ve Been Meaning To Tell You, a woman discovers that her odious ex-husband has published a fictional account of their life together in lieu of a genuine apology. In “Fiction,” from Too Much Happiness, a woman reunites with a former student who has written a story about her, only to discover that the author, decades later and despite having drawn on her for source material, doesn’t remember her at all. In each of these stories, the act of being turned into someone else’s art causes a shared, if different, sense of pain.

“Family Furnishings” is one of the few Munro stories that confronts this question from the point of view of the writer herself. As the narrator begins to draw on her family’s secrets (or what she thinks she knows of them), she feels liberated from “squalor of tragedy” they lived in. When she first receives Alfrida’s anguished memory and decides to transform it into a piece of fiction, she felt “jolted and released […] [allowed] to breathe a different kind of air.”

“This was what I wanted, this was what I thought I had to pay attention to, this was how I wanted my life to be,” she thinks as she sits at a counter in a drugstore, her future as a writer taking seed in someone else’s life. In the back of the store, a ballgame is on the radio. The broadcast roars of the crowd, “full of sorrow […] assent and lamentation,” enliven her, pushing her beyond the suffocating hostility of her childhood. By Munro’s account, our ability to thieve stories from our lives can spare us as much as it hurts us. It does not seem that she believes it can redeem us.