March Madness has come and gone, as have the NFL draft, the NBA draft lottery, most of the NBA and NHL playoffs, and the start of the MLB season—but the Fantasy Blog Draft competition is only just getting started. Literature never sleeps!

This week the managers will fill the final spot on their rosters and then start up training camp to prep for the competition. In two weeks, we will preview the matchups and once again ask for you to pick the winners, and two weeks after that the competition will begin in earnest.

But before that, let’s see what decisions the managers made this week. Remember: for the last wildcard picks they must choose the blogger and the blogger’s position, so there’s lots of room for creativity.

With the thirty-first pick in the Ploughshares Fantasy Blog Draft, The Mighty Duck Palahniuks select Hunter S. Thompson as a Health and Living Columnist:

Manager Benjamin Samuel on his pick:

Hunter S. Thompson is a figure known as much for his writing as for his lifestyle. While many focus on his appetite for illicit substances, few are aware of just how health conscious he was. For instance, did you know that Thompson kept a diet that was both gluten-free and vegan? Sure, that’s because the only substances he consumed were peyote, tobacco, and a hearty regimen of LSD—but some suggest that due to his aversion for the authorities, i.e. pigs, he also kept kosher. Thompson treated his body like it was an evidence locker at the ATF, and was evidently so powerful that the only thing that could put him down was, sadly, himself. A good health columnist will help you live forever, and Thompson was as close to immortal as anyone could hope for.

This selection nicely contrasts with Herzog’s more amateurish attempts at cooking. While some may dismiss Thompson as a maniac, his “reverence” for breakfast is honorable, and he continues to inspire writers everywhere to eat more healthily.

With the thirty-second pick, Leave it to Cheever selects Emmanuel Bove as a Ghostwriter:

So many great writers are forgotten and overshadowed, but there should be no shame in residing in the shadows. This role isn’t much a stretch for the French writer Emmanuel Bove, as he published numerous novels under the pseudonym Jean Vallois. However, his own work is courageous and penetrating, simple and direct, antiheroes living on the edge of the human condition. Praised by contemporaries Rilke, Beckett, and Camus, Bove preferred silence over publicity, but throughout remained devoted to literature. Bove’s modesty and productivity—besides twenty-one novels in as many years, he was also a journalist—would fit well as a ghostwriter, much like a ghost, where no footsteps are left behind but his presence is never forgotten.

Brilliant pick. The commissioner thought that there wasn’t much room left for creativity in this exercise, but Leave it to Cheever has proven him wrong. A ghostwriter with a consistent, existential theme could plug into a team as a “role player” in almost any situation, widely expanding the team as an “offensive” threat. Excellent work here.

With the thirty-third pick, The Holden Caulbabies select James Baldwin as Travel Writer:

Manager Michael Nye on this pick:

One of the aspects of Baldwin’s writing that has always stayed with me is the sense of exquisite loneliness. Loneliness is the quality that permeates all of his work, and in travel, many of us are trying to “get away” for a while, or find ourselves, or lose ourselves, or … well, however you spin it, do you see why Baldwin fits? He lived primarily in France after leaving the States, but also spent time in Switzerland and Turkey and did plenty of globe-hopping. Oh, also, he wrote some pretty good books, stories, plays, and poems, once again fitting with the multigenre flexibility of other Holden Caulbabies.

The Holden Caulbabies take another giant. Taking Baldwin as sixth man feels like an extravagance. The commissioner might have to look into collusion—there are rumors that Faulkner was sick of his Library of America collection, wanted to escape for more international teammates, and conspired with Montaigne to team up. One thing is for sure: this team is not going to be easy to knock off in competition. 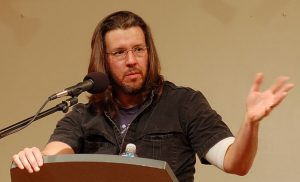 For our final pick, we’re taking on David Foster Wallace as our resident Advice Columnist. We’re thinking Ask Abby with even more earnestness and an unflinching fervor to boot (did we mention the endnotes?). While the whole genius-thing might make this choice seem cheap, the truth is that DFW truly does have a hold on our Midwestern hearts. Born in Ithaca, New York, he was an early childhood transplant to central Illinois, land of a hundred corn fields, where he spent the remainder of his youth. To steal our hearts even more, he delivered the incomparable This Is Water address at the 2005 commencement ceremony of Kenyon College—and how much closer to home can we get than that? As our final pick, DFW marries big ideas with a powerful belief in each word, each sentence—something that links all of our picks thus far. To be upfront, we choose DFW as our Advice Columnist with no irony. We want to hear what he has to share with our readers. And we think this might change the whole game.

A timely pick, as DFW’s commencement speech “This is Water” has just gone viral five years after his death. He adds some serious thinking power to this already strong team.

With the thirty-fifth pick, Vonnegut to the Chopper! selects Jon Krakauer as Investigative Journalist and Adventure Writer:

Manager Brenna Dixon on the decision:

Every blog needs a versatile writer to speak intelligently on subjects that fall outside the more defined edges of fiction, nonfiction, and poetry. Jon Krakauer, author of Into the Wild, Into Thin Air, and Under the Banner of Heaven, is that versatile writer. He has written for National Geographic, Rolling Stone, Outside, and Architectural Digest, among other magazines. The man recognizes a compelling story when he sees it. When he’s not climbing mountains, he’s chasing down leads on extremist religious beliefs, tragic Alaskan adventures, and war. He is a field-wise and savvy writer to round out this blog team.

Another excellent balancing pick—most writers are introverted, indoor creatures, and Krakauer should be an ace lead dog that will drag the other bloggers along with him.

With the thirty-sixth AND FINAL pick in the Ploughshares Fantasy Blog Draft, What the Chuckin’ Buk?! selects Irving Harper as Design/DIY Editor: 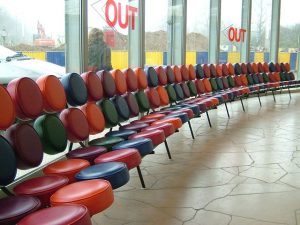 Manager Jordan Kushins on her selection:

Blogs are a super spot to share words, sure, but hot damn do people like scrolling through sites for visual inspiration as well. Irving Harper was a master of mid-century industrial and graphic design, and contributed some big time icons to the pantheon of famous swoon-worthy furniture (even if they often weren’t credited to him). In his spare time, Harper dedicated himself to his personal artistic pursuits which included a truly incredible collection of paper sculptures and curios; check out the recent monograph that documents over four decades of his brilliant work and I dare you not to come away wowed. His integral role here as part of What the Chuckin’ Buk would be to offer tips on and peeks at what he’s up to, to give people a good goosing to pursue their own passion projects, and to support folks who want to get handsy with the creative stuff that gets their pulse racing, whatever that may be.

Among Harper’s uncredited furniture is the Marshmallow Sofa pictured above. A visual artist is an excellent pick, up there with the Herzog pick as nonfiction documentarian in terms of creativity. And it’s easy to see how he and Geoff Manaugh would make fast friends. Strong pick.

For the final wildcard installment of “Those That Remain on the Draftboard,” I thought I’d turn the activity on its head and list the top five athletes who could be members of a Fantasy Blog team. These are the jocks who could rock our blogs off and were not taken in the draft:

5. Charles Barkley. First of all, we might have to get the Round Mound of Sound a spellchecker and an editor, but I’m confident he could put together a solid column of sports news or his opinions on any topic, which would guarantee his unique class of non-sequitirs.

4. Phil Jackson. The Zen Master, author of a number of books, and routine thrower-under-the-bus of former players. His books always draw attention on publication, so there’d be no better blogger to get our hits up.

3. Yogi Berra. You can observe a lot just by watching, and there’s no doubt that Berra’s choice quotes and observations would serve well as a social media presence for our blog team.

2. Chris Kluwe. The Minnesota Vikings punter who took a stand for First Amendment rights and gay marriage rights on Deadspin. He has “a way with words” and knows how to take down an opponent.

1. Kareem Abdul-Jabbar. A talented, contemplative writer who has been contributing all over the place on a number of different topics, from the HBO series “Girls” to lists of advice. Also, the Sky Hook is the hardest shot to defend in the history of basketball.

This concludes the first ever Ploughshares Fantasy Blog Draft! The teams are now huddled in preparation and will be ready for the tournament soon. Check back in two weeks to see commentary on the matchups.