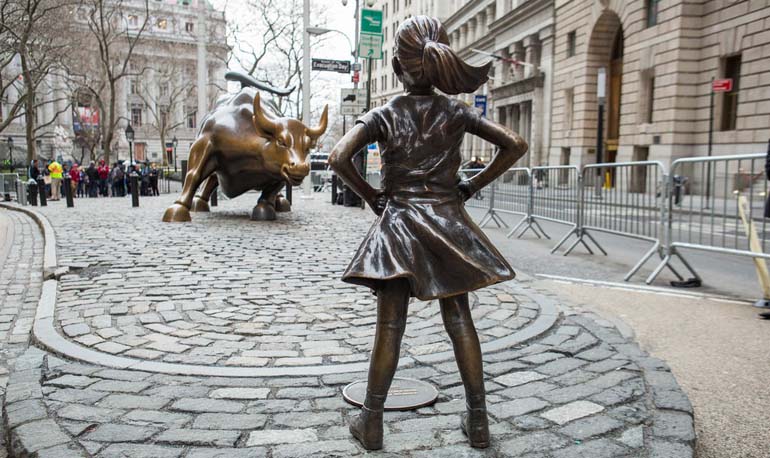 Fearless Girl, a bronze statue installed near the iconic Charging Bull statue in New York City the day before International Women’s Day, has faced controversy from all sides. Anti-feminists claim the statue is “an excuse for women to sulk.” Some feminists argue that, for a piece of art that is meant to encourage gender diversity in the workplace, the image of a “girl” rather than a “woman” is infantilizing. And Arturo de Modica, the artist who sculpted Charging Bull, complained that the statue is not art, but was commissioned by a corporation, and that it changes the meaning of the bull from “a symbol of prosperity and strength” into a menacing, aggressive villain.

I decided to build this dog and make it crappy to downgrade the statue, exactly how the girl is a downgrade on the bull.

Putting aside the arguments about Fearless Girl’s effectiveness as a feminist symbol for the time being, there’s still a lot to unpack about the role of capitalism in art, authorial intent, and artistic appropriation. First, the fact that Fearless Girl was commissioned by a corporation does not invalidate its status as a work of art. Capitalism is inextricable from art, since all art is produced in a capitalist society. Most of the revered paintings from the Renaissance were commissioned by rich families. Louisa May Alcott primarily wrote for money, to put food on the table, but that doesn’t change the fact that Little Women is a perennial American classic.

The question of authorial intent is a little bit trickier. In literary criticism, for example, there are different schools of thought that place varying amounts of value on the “true intent” of the author. Traditional literary criticism was almost entirely focused on clues from the author’s life, writings, and culture that might point to the intended meaning of the text. But adherents of New Criticism, which came into prominence in America in the mid-twentieth century, contended that the author’s interpretation of the work is wholly irrelevant, and that one can look only to the work itself for its meaning. Similar movements popped up all over the world; French critic Roland Barthes advocated for “close reading” rather than biographical analysis, and famously said that “the birth of the reader must be ransomed by the death of the author.”

While the rigidity of New Criticism and similar “death of the author” movements has mostly fallen away, a focus on the work as a thing-in-itself has remained. While there are still different schools of thought, most literary critics would at the very least agree that a work’s meaning is not solely determined by the intent of the author. Many critics, particularly those in the “reader response” school of criticism, maintain that an author’s interpretation is simply one among many, and that a work’s meaning is shaped by its readers. According to literary urban legend, Isaac Asimov once told a professor teaching his book that her interpretation was interesting, but not at all what he had in mind. She retorted, “Just because you wrote it, what makes you think you have the slightest idea what it’s about?”

Some authors have changed their minds about the meaning of their own work over the years, while still others have been corrected about the meaning of their work by their readers. Buffy the Vampire Slayer creator Joss Whedon recounted in an NPR interview that fans in an internet forum managed to convince him there was lesbian subtext between two characters that he hadn’t consciously intended. Ray Bradbury famously stormed out of a lecture at UCLA when students insisted that Fahrenheit 451 is about censorship, while he claims that it was about the dangers of burgeoning technologies, particularly television.

So, what does all of this mean for Charging Bull and Fearless Girl? In short, even if one “empathizes” with de Modica’s perspective, he does not necessarily own the meaning of his work. Once works of art are released onto the world, they take on a life of their own. Conceptually (rather than legally) speaking, the author gives others license to critique it, interpret it, and, yes, even appropriate it. While Bradbury was intending to respond to the rise of technology, he released Fahrenheit 451 in the 1950s, when anxiety about government censorship during the “red scare” was on the rise and McCarthyism-inspired burnings of pro-communism books were relatively commonplace. Not to mention, even if Bradbury’s interpretation back then could be taken as “correct,” the relevance of a work of art changes over time. While anxieties about both technology and communism have subsided (or, more accurately, morphed), Fahrenheit 451’s sales spiked after Trump’s election because it described a dystopia in which “the word ‘intellectual’ became the swear word it deserved to be.”

Similarly, de Modica’s interpretation of his work does not exclude other interpretations, and even if it did, the meaning of his work could have changed over time. For example, even if de Modica himself chose a bull simply to represent the “bull market,” there’s a reason that the market is not called a “steer” market, or a “heifer” market. Power, particularly financial power, is associated with masculinity, especially on the historically male-dominated Wall Street. That’s why tourists were always encouraged to rub the bull’s horns and testicles for luck, to the point that they have been rubbed golden. And in the world of 2017, when we are increasingly questioning that association between masculinity and power, as well as the lack of representation for women on Wall Street, the bull has taken on new meaning, with or without Fearless Girl.

The bull is beautiful, it’s a stunning piece of art. But the world changes and we are now running with this bull.

Some argue that Fearless Girl is not a “legitimate” work of art because its meaning is dependent on Charging Bull, but works of art often appropriate parts (or even all) of other works in order to synthesize new meaning. For example, the famous 1966 novel by Jean Rhys, Wide Sargasso Sea, is entirely based on characters from Jane Eyre with the goal of reinterpreting the classic novel through a postcolonial lens. Rhys takes a minor character, the infamous “madwoman in the attic,” and fleshes her out in order to repudiate that sexist trope and explore the effects of gender and racial oppression. The novel doesn’t “degrade” Jane Eyre, or take away from the fact that Jane Eyre was a pioneering feminist novel for its time. It simply draws attention to the novel’s flaws in the context of our more enlightened times.

In that sense, one could argue that Fearless Girl does not “change” the meaning of the bull, she simply brings to our attention that the bull can be interpreted differently through a modern lens. The original intent of the bull is still there, but Fearless Girl has simply added another layer of meaning. The girl is not “downgrading” the bull, but is in conversation with the bull, as all works of art are in conversation with each other.