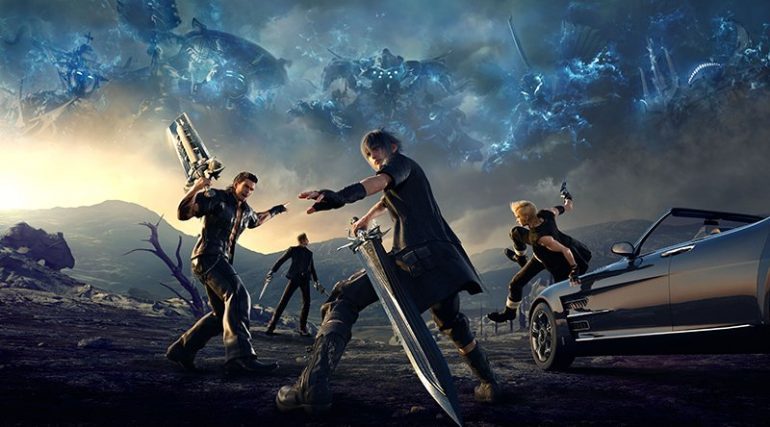 Only in a Japanese RPG can a boy band save the world from the nefarious empire and its demonic biotechnological army. In Final Fantasy XV, four male friends led by its visual kei leader, Noctis (whose name means “night” in Latin), use the empire’s language of violence to decolonize the kingdom of darkness. Somewhere, Fanon’s ghost is drinking sake and smoking Peace cigarettes in celebration.

In Final Fantasy XV the all-American road trip becomes an extended metaphor of the male coming-of-age narrative: Noctis and his three friends Gladiolus Amicitia, Ignis Scientia, Prompto Argentum (and their Latin for Dummies names meaning “Sword Friendship,” “Fire Science,” and “Prompt Silver”) drive around Lucis (the land of light) and Altissia searching for misplaced or rare objects, going on hunts, discovering treasures, and defeating monsters. Driving is the modus operandi by which virtually all quests are pursued in this game, thereby connecting mobility, freedom, character development, and masculinity. One of the classic genre conventions of the RPG is of course leveling up, where player attributes such as strength, defense, attack, and hit points, for example, increase with each new level. In Final Fantasy XV, however, leveling up also becomes a potent signifier of maturation both in terms of fighting ability, strength, and also artisanship since the four characters cultivate unique skills like fishing, survival, photography, and cooking, which all improve with practice. Eventually, the apprentices in this game become artisans, a secondary role that complements but never challenges their primary roles as specialized warriors. In fact, the primacy of fighting and conflict in Final Fantasy XV centers the construction of masculinity in a troubling and predictably medieval way that has become a trademark of the genre itself. In this game, to fight is to evolve. The more the characters hunt and kill, the more they mature. Cinematic violence is the gateway to personal evolution in virtually all Final Fantasy games, but in FFXV, it feels more like gang warfare than a dance.

In the first chapters, Noctis is a young and immature king who sometimes acts defensively and impulsively, incapable of defeating the simplest enemy without the collective strength of his friends (each of whom specialize in a different style of combat, as their names suggest). As Noctis levels up, however, he becomes stronger both emotionally and physically (his increasing hit points acting as a signifier for his own masculinity). In chapter 13, Noctis grows up. His former androgyny has now become gendered (as if androgyny were simply a marker of adolescence in the Japanese imagination). Noctis has facial hair and sunken cheeks now. He is physically strong and psychologically self-aware in a way he couldn’t be in the beginning of the narrative. Through tragedy, death, and relentless heartache, the closing chapters of Final Fantasy XV suggest that Noctis’s innocence has finally disappeared, slowly replaced with determination, self-awareness, and strength he lacked as a tween. In some sort of convoluted Confucian logic, age in FFXV is strength.

At the same time, there is an implied (and ignored) trauma in the maturation process since characters can only obtain experience points by killing continuously (which always means being attacked, struggling to survive, and sometimes even dying). In fact, the four friends kill so often, they take pictures of their fights and then laugh about their missteps afterwards, essentially trivializing their slaughter. The implicit and unarticulated trauma inherent in Final Fantasy XV’s leveling up system suggests that (mob) violence and (armed) conflict are intrinsic components of male identification and male camaraderie. Violence becomes a site of gender performativity and self-transformation in Final Fantasy XV, as if developing characters was somehow antithetical to giving them complete subjectivity.

Part of what makes Final Fantasy so intriguing is the way in which masculinity is both appallingly simplistic and fascinatingly complicated. On one hand, Noctis and his three friends defy stereotypical constructions of masculinity. They look exactly like a Japanese boy band: pretty, skinny, stylish, and coordinated. Noctis has long but sculpted hair (players can even buy hair gel in Lestallum). Ignis (who acts like a member of her majesty’s secret service and has an inexplicable English accent) is a black butler prototype (both an avid cook, a part-time assassin, and personal bodyguard to Noctis). The blond hipster, Prompto, is a gifted photographer from a lower (scientifically engineered) class who takes selfies and group shots with his camera. He worries about fitting in within the group, obsesses about the sexually objectified mechanic Cindy (who barely knows of his existence), and eventually gets rescued by his royal friends, which reinforces his own class inferiority at the same time that it reaffirms their group harmony. Collectively, one of the most redemptive features of Final Fantasy XV is the way male friendship is delineated as something dynamic, nurturing, heroic, but also empathetic. The characters themselves still need more fleshing out. After all, we don’t see a single tear shed until the epilogue, but their rapport is authentic and multidimensional in way that is surprising.

On the other hand, Noctis and his three friends spend most of their time driving around Lucis, listening to dub music and old Final Fantasy soundtracks, giving each other crap, playing postmodern video games, talking about girls, going out to eat, and seeking adventures in a reimagined Deep South that has been translated by the Japanese popular imagination. There’s a simplicity (but also a monotony) to the open world mechanics of Final Fantasy XV that is slightly insulting to the characters’ (and the players’) intelligence as if the quest for becoming a complete and evolved human (in whatever sense of the word) is simply the sum total of dead bodies counted and chores completed. Because FFXV is predicated on the classic American road trip and because it forces players kill in order to level up, masculinity is essentially defined and re-asserted in this game through sanitized bloodshed, constant mobility, heteronormative female longing, mutating adventure, and stoicism, effectively blurring the lines of an open-world RPG, samurai tale, and Arthurian romance.

Ultimately, while Final Fantasy XV is a graphically stunning, beautifully paced, and highly addictive video game that employs postmodern literary devices like a fragmented plot line, irony, and narrative self-awareness to create fresh, satisfying, and original game play, it’s also got some serious and reoccurring issues. The problem isn’t that Final Fantasy XV is an unapologetic coming-of-age story about male friendship, but rather that the modality through which this story is told relies upon the male gaze of an adolescent gamer that treats male bodies as disposable (but also infinitely powerful) and female bodies as invisible and vulnerable (but also objectified). While the characters in this game grow up, the perspective does not.