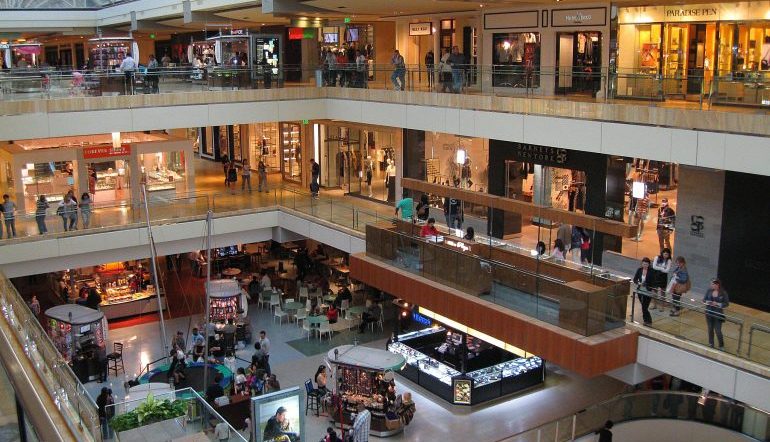 I was a child of suburban America, which is to say that I know my way around a shopping mall. Oh, beautiful spacious dressing rooms and endless parking lots! And yet, where are my novellas of the department store lingerie department? My food court story cycles? My bildungsromans of warm pretzels and cold soda? As far as I can tell, literary fiction has long eschewed the mall as setting, but in the last five years, I’ve had the pleasure of reading a trio of short stories centered on this palace of consumer delights. Most recently, the titular story in Nana Kwame Adjei-Brenyah’s Friday Black (and its linked stories “How to Sell a Jacket as Told by IceKing” and “In Retail”) transport the reader to an outerwear store at the fictional Prominent Mall. Carmen Maria Machado’s Her Body and Other Parties gives us “Real Women Have Bodies,” which opens in a seasonal prom dress store located next door to the omnipresent mall photo studio, while Aimee Bender’s “Lemonade,” from her collection The Color Master, follows a teenaged girl through L.A.’s Beverly Center. Together, these stories illuminate the mall as a consumer fantasyland and capitalist dystopia, a place in which our deepest desires and worst fears are put up for sale amidst the parkas, prom dresses, and make-up kits.

For me, the allure of the mall was most potent during my youth, when I imagined, in spite of myself, that it held the key to a certain kind of teenage dream life. This feeling is shared by the protagonist of Bender’s “Lemonade,” whose inevitable rollercoaster of desire and disappointment is the stuff of Greek tragedy writ small and which is played out between the food court and the MAC counter.

Bender’s protagonist, Luanne, is well intentioned but socially inept. She’s the type of girl with “a few jokes I keep stored in my mind in case there’s nothing to say,” who eats all of the popcorn shrimp while her friend picks at her food and giggles on the phone with her boyfriend. For a girl like Luanne, the mall cuts two ways. On the one hand, it’s a place of freedom—a place of adolescence unfettered by the adult influence of parents and teachers. Luanne feels honored when she is invited to the mall by Sylv—“the first friend I’ve had in a long time who really is way high on the friend pyramid.” Yet on the other hand, the mall is also a place where the tyranny of other teenagers unfolds unmitigated, and as the story progresses, Luanne falls victim to the very “friend pyramid” she invokes.

After being banished by Sylv and her more popular cohort, Luanne attempts to salvage the afternoon with a trip to the MAC counter, where she tries on the exact shade of lipstick worn by her tormenters. Predictably, her attempt at imitation proves fruitless. Luanne can buy the same lipstick as her more confident counterpart, but rather than imparting the power of the popular girl, it only underscores the differences between them. It’s a reality that Luanne accepts even before she makes her purchase: “It wasn’t any good on me. It made me look even splotchier because the lipstick matched my splotch tone.”

While the realist mode of “Lemonade” maps the mall as a site of adolescent disappointments and betrayals, “Friday Black” and “Real Women Have Bodies” go further, stepping outside the bounds of realism towards dystopias beyond popcorn shrimp and mean girls. Drawing on elements of horror, Machado and Adjei-Brenyah each introduce a speculative premise to the familiar world of the shopping mall; these twists serve to heighten the reader’s appreciation for the authors’ shared argument: that capitalism disappoints and betrays all of us—particularly those of us who, like Luanne, exist on the margins of the dominant social order.

In “Friday Black,” Adjei-Brenyah, who himself sold parkas at New York’s Palisades Center in his young adult years, turns Black Friday into a massacre that leaves 129 dead, killed in their rush toward discount merchandise. Since taking a bite from a customer several seasons before, the protagonist has been endowed with the ability to understand customers’ desires. The Black Friday shoppers aren’t exactly zombies, but they’re not far off, and in learning their language, the protagonist—known as IceKing—teeters on the verge of soullessness, complicit in a capitalism that promotes competition and consumption at all costs. He’s a success story—the top seller in the store, one of the top sellers in the nation—meaning that he’s acquired a perfect fluency in the language of commerce but at vast personal and psychological cost.

That cost is, ultimately, what the story is about: the side effects of consumerism, particularly as it impacts people like IceKing and his coworkers—mostly, people of color working hourly jobs that don’t pay enough for them to buy the products they’re selling. It’s one thing to buy and wish you hadn’t, as Luanne does in “Lemonade,” but “Friday Black” suggests it’s another thing to lack the means to buy—or to be made to feel as though you’re being bought, by hourly wages and a world that views your labor as a commodity.

IceKing’s backstory is one of a family withering away under the influence of “lean living.” While there had been years of playing games and eating stuffing on Thanksgiving, now, IceKing’s “parents yell about money” and he works Black Friday, slowly chewing a dollar menu burger and psyching himself up go back into the fray. His solution? Rack up the most sales and take home the parka offered as a prize. “Soon,” he tells himself, “I’ll have a five-hundred-dollar jacket as proof to my mother that I’ll love her forever.”

Of course, the reader can already guess how it all ends, for at the mall, there is little that does not fade upon possession. The titular “Lemonade” in Bender’s story is “okay”—“Not delicious, but not bad”—and the prized jacket in “Friday Black” is, we learn in a later story, equally mediocre. After all he went through to present his mother with the SuperShell, “It didn’t fit right. She hardly wears it.” Invariably, the reality of the thing far less satisfying than the fantasy of ownership.

Machado’s “Real Women Have Bodies” opens at Glam, a prom dress store in a world where women’s bodies themselves have begun to fade unpredictably and inexorably into near-nothingness. From the very first sentence, the reader is primed for a kind of sardonic darkness: “I used to think my place of employment, Glam, looked like the view from inside a casket,” the narrator begins. It’s a hell of an opening and one that foretells the story’s inevitable movement toward something that looks like death, but is ultimately inscrutable. “Real Women” nods to the familiar mall fixtures—“minimum wage,” “the clattering grates at the storefronts,” and “fifteen-minute break[s] behind the emergency exit” serenaded by “the rumble of a forklift”—then breaks new ground, taking us out of the mall to better explore the chain of production. In what begins as a hook-up with one of the dressmaker’s daughters, the main character discovers that faded women are voluntarily being stitched into the seams of the dresses.

With this revelation, Glam’s casket-like design takes on a whole new meaning. Women’s souls (or something like them) hang on each of the store’s hangers, a reality so unsettling that the story’s cash-strapped protagonist resigns. Her next job is equally soul-sucking. Machado, who worked at the Lush in Pennsylvania’s King of Prussia Mall, reminds us that, though the protagonist liberates herself from the mall, she can’t free herself from the world—capitalism is capitalism, whether you’re working at a prom dress store or a condiment factory. Indeed, the protagonist observes, “It’s been worse since the recession,” with women fading faster and more frequently. It isn’t long before the story’s love interest, Petra, is translucent in the narrator’s bed.

“Real Women Have Bodies” ends in a glorious, but ultimately futile, act of vandalism: the protagonist returns to the dress store and breaks in, armed with a pair of pinking shears. She rips apart satin and taffeta in the hope of liberating the women within but finds that no matter what she does to the fabric, the ghostly forms linger, silent and unfree. What does it mean? Machado’s story is too good to give itself over to straightforward metaphor. Instead, she offers us a whole bouquet of possible meanings: about the way society treats women’s bodies, the relationships between women and our clothes, the invisibility of garment workers—the list goes on.

The more deeply I read these stories, the more I begin to see the mall as a playground of symbolic meanings: the grates that roll down over storefronts like cages; the noticeable lack of windows; the escalators—both a tangible reminder of the promise of upward mobility and a warning that all who rise will someday make their way back down again. In Bender’s Beverly Center, Luanne rides down while her popular counterparts, gliding up, pretend not to see her; in Adjei-Brenyah’s Prominent Mall, the main character steps on the down escalator back to the bloodbath even as his coworker Duo rides up and out—away from the mall and its rising body count.

The mall, too, speaks its own language of brand names and proper nouns, and accordingly, each of these three stories is shot through with the linguistic affectations of consumerism. Compound words abound, conjuring the allure of novelty—the putative originality that draws shoppers to the mall’s glittering fluorescent hallways. On the racks at Glam hangs a dress Machado describes as a “thunderpuff,” while in “Friday Black,” customers salivate for their “SleekPack” parkas. Luanne, in “Lemonade,” buys a lipstick called “Electric Seashell,” the very combination of which defies common sense. “I thought [it] was a bad name,” Luanne observes, “because if you put together a seashell and electricity, you could get electrocuted, depending on the location.” Adjei-Brenyah’s “PoleFace™” brand serves as the perfect parody of NorthFace, both capturing the spirit of the original and injecting a brutal note that underscores the violence of the world on the page.

If the fantasy of joyful consumption is an expensive yet ill-fitting jacket, then all three of these stories pick it apart at the seams, leaving the reader to examine the material and test its worth. Lipstick cannot, in fact, buy friendship; outerwear is no substitute for familial warmth; a beautiful dress cannot make up for the loss of beautiful body. It’s a truth we already knew: consumer goods are not the stuff of human happiness. And yet, each of these three stories underlines this reality while also rendering it more complex, interrogating the ways in which we can and cannot resist capitalism and its cruelties.