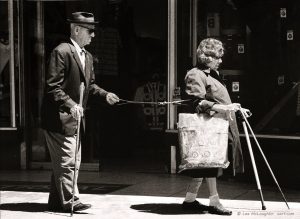 Raymond Carver insisted that his iconic masterpiece “Cathedral” was not based on a lesser-known D.H. Lawrence story entitled “The Blind Man,” and that he had not read the story prior to writing “Cathedral,” although he had read—and admired— other short fiction by Lawrence. Still, as Samantha Gillison points out in a Salon article from 2000, this seems, perhaps, unlikely given the similarities between the two stories. Be that as it may, it’s interesting to look at both stories and see how “Cathedral” both mirrors and alters “The Blind Man,” unintentionally or not.

“The Blind Man,” published in 1922, takes place just after the first World War, and is narrated by the three main characters: Isabel Pervin; her husband, Maurice, who lost his sight in the war; and her cousin Bertie Reid. The story begins with Isabel’s point-of-view, and she narrates the first half of the story. We learn that Bertie—a favorite cousin of Isabel’s and a not-so-favorite in-law of Maurice’s— is coming to visit; we learn that Isabel is pregnant; and we learn a great deal about Isabel and Maurice’s relationship, particularly during the past year, since Maurice had returned: “She and he had been almost entirely alone together since he was wounded. They talked and sang and read together in a wonderful and unspeakable intimacy.”

Isabel goes to the barn to retrieve Maurice prior to Bertie’s arrival, and it is in the description of the barn and the horses that we see the darkness that seems to surround Maurice. There is something frightening and yet exciting for Isabel in this dark place:

Nothing came from the darkness. She knew the rain and wind blew in upon the horses, the hot animal life. Feeling it wrong, she entered the stable, and drew the lower half of the door shut, holding the upper part close. She did not stir, because she was aware of the presence of the dark hindquarters of the horses, though she could not see them, and she was afraid. Something wild stirred in her heart.

After Isabel retrieves Maurice from the barn and he goes upstairs to change for dinner, the point-of-view shifts to Maurice. And after Bertie arrives, the point-of-view moves between the three characters. The confrontation in the barn alters the mood of the story, foreshadowing the ending, and the shifting point-of-view reflects that change and the tensions that arise from Bertie’s presence. At times, the point-of-view is shared by Isabel and Bertie, as they—the seeing—look upon Maurice: “And he held out the bowl. Bertie took it. Both he and Isabel were a little afraid, and deeply disturbed.”

After dinner, Maurice returns to the barn and, a bit later, Bertie goes to retrieve him, at Isabel’s request. In the barn, the two men discuss Maurice’s scar and then Maurice touches Bertie’s face, exploring it with his hand. Then, he asks Bertie to touch his eyes: “Now Bertie quivered with revulsion. Yet he was under the power of the blind man, as if hypnotized.” When they return to Isabel, Maurice has shed his gloom and is excited by his new friendship with Bertie. Bertie, on the other hand, is shattered, and Isabel knows this. The story concludes:

But she was watching Bertie. She knew that he had one desire—to escape from this intimacy, this friendship, which had been thrust upon him. He could not bear it that he had been touched by the blind man, his insane reserve broken in. He was like a mollusk whose shell is broken.

Isabel’s thoughts remain with Bertie, knowing him, it seems, better than she knows her own husband. It is through Lawrence’s use of the roving point-of-view that we understand the relationship between the three characters.

Carver’s setup is similar: three adults, one married couple and a single man, one of whom is blind. In Carver’s version, though, it is the visitor who is blind, not the husband. The first sentence sets up the story for us: “This blind man, an old friend of my wife’s, he was on his way to spend the night.” The jealousy and tension between the two men is quite similar in the two stories. And the story takes place in the course of one evening, as does Lawrence’s story, and by the end, the relationship between the men has altered.

“Cathedral,” though, is narrated by the husband in a first-person voice. We get a strong sense of the narrator, right from the opening paragraph: “A blind man in my house was not something I looked forward to.” His description of the past relationship between his wife and the blind man, Robert, is full of detail, with the scene describing the way in which his wife had touched the blind man’s face—a very intimate moment— quite similar to the scene in “The Blind Man.”

The story culminates, of course, in the narrator drawing a cathedral for the blind man while his wife is asleep on the couch. And here, too, we see close similarities to the way in which the men interact in Lawrence’s story. There, after Bertie touches Maurice’s eyes, “Maurice suddenly covered them with his own hand, pressed the fingers of the other man upon his disfigured eye-sockets, trembling in every fibre, and rocking slightly, slowly, from side to side. He remained thus for a minute or more, whilst Bertie stood as if in a swoon, unconscious, imprisoned.” It is the touching of one hand upon the other that creates this climactic moment; it is the power of the blind man over the other.

And in Carver’s version, it is clear that if the narrator drew the cathedral by himself, it would have been a different moment. Instead, after Robert has inspected the paper, he says:

He found my hand, the hand with the pen. He closed his hand over my hand. “Go ahead, bub, draw,” he said. “Draw. You’ll see. I’ll follow along with you. It’ll be okay. Just begin now like I’m telling you. You’ll see. Draw,” the blind man said.

The narrator begins to draw, and we can feel the moment expanding through his narration: “I put in windows with arches. I drew flying buttresses. I hung great doors. I couldn’t stop.” A little while later, after the narrator’s wife wakes up, the narrator continues his drawing, now seeing himself and the blind man as one: “So we kept on with it. His fingers rode my fingers as my hand went over the paper. It was like nothing else in my life up to now.”

This moment of connection between the two men is strikingly similar to the version in Lawrence’s story. The power and insight of the blind over the seeing is made clear as new insights are reached and understood.