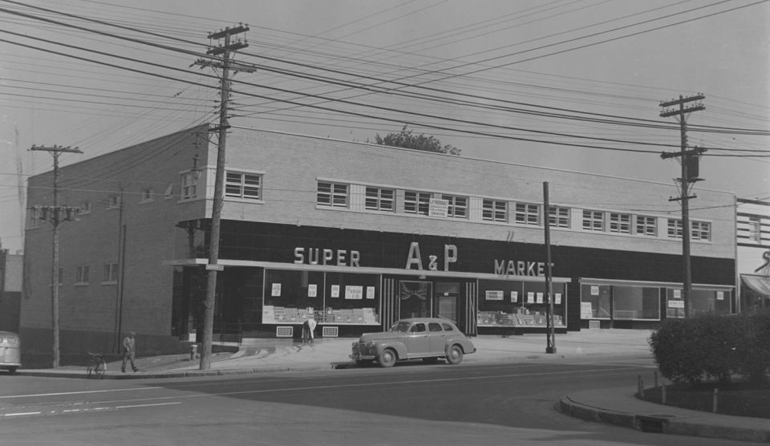 One of John Updike’s early and most anthologized stories, “A & P,” from Pigeon Feathers and Other Stories, is a modern retelling of James Joyce’s “Araby” from The Dubliners. While almost 50 years pass between their publications, both stories consider how a boy’s romantic crush leads to heroic deeds that are ultimately unfulfilled. It is clear that Updike used “Araby” as a model for his story, both mirroring and updating key elements.

In “Araby,” the first person narrator is in love with his friend’s sister who lives on his street. Again and again, Joyce presents us with images of this idealized woman as the boy observes her standing outside of her home, a building with a “brown imperturbable face”:

She held one of the spikes, bowing her head towards me. The light from the lamp opposite our door caught the white curve of her neck, lit up her hair that rested there and, falling, lit up the hand upon the railing. It fell over one side of her dress and caught the white border of a petticoat, just visible as she stood at ease.

Because the Dublin of “Araby” is so dark and constrained, the lamplight is key here, as it lights up everything about her, and allows us to see her as the narrator does. She is, literally and figuratively, above the narrator, and we feel his adoration for her in the way that he describes her. As a student at the convent, she is clearly drawn as a madonna figure but there is also—as often with Joyce—a bit of the whore symbolism woven in as well, as we end with a look at her undergarments. The narrator is dramatic in his love for her and that dramatic tendency returns at the end, in his epiphanic moment, as his disillusionment reaches its peak.

Updike’s world is considerably brighter; the entire story takes place within an A & P lit by florescent light, the grocery store which is “right in the middle of town.” No extra lights are needed to see the three girls as they saunter into the store “in nothing but bathing suits.” The girl to which Sammy, the first-person narrator, is drawn is described in a similar fashion to the girl in “Araby.” Updike clearly mimics Joyce’s description as well as the way in which Joyce uses the color white to describe the girl: “those long white prima donna legs;” “you wouldn’t have known there could have been anything whiter than those shoulders;” and “she held her head so high her neck, coming up out of those white shoulders, looked kind of stretched, but I didn’t mind. The longer her neck was, the more of her there was.”

Unlike Joyce’s narrator, Sammy is honest and straight-forward about his lust for the girl. His colloquial and sardonic tone draws us close to him, and his voice and attitude towards the girls is clear throughout the story. He is considerably older than Joyce’s narrator and therefore closer to becoming an adult. He is nowhere near as dramatic as the boy in “Araby,” and yet, he, too, becomes distracted by his romantic attachment.

The heroic deeds that both boys undertake are also constructed as parallels. In Joyce’s story, the narrator tells the girl that he will go to Araby, an exotic bazaar in Dublin, as she is unable to go, and that he will bring her back a gift. Araby was an actual bazaar that came to Dublin during Joyce’s childhood. Again we see how the narrator’s romanticism takes hold of him. He is unable to focus at school: “The syllables of the word Araby were called to me through the silence in which my soul luxuriated and cast an Eastern enchantment over me.” It is an exotic word that lays a trance over the young narrator. Obstacle after obstacle stands in the narrator’s way to get to Araby—an uncle late for dinner, little money—but he finally makes it to the bazaar, only to find it almost closed, many of the shops shuttered. It is a representation of the boy’s disillusionment, the crashing down of his dreams.

The syllables of “A & P,” of course, rhythmically match those of “Araby,” and the store is clearly used to portray the suburban fifties version of the marketplace. Updike also has Sammy attempt to give a gift to his crush but his gift is based on a sense of moral obligation: he feels that the girls have been wronged when they are told by the manager that they must dress appropriately to enter the store. He feels this internally (“remembering how he made that pretty girl blush makes me so scrunchy inside”) and he quits his job for them, “hoping they’ll stop and watch me, their unsuspecting hero.” By the time he gets outside, the girls are gone, of course, and Sammy, like Joyce’s narrator, has an epiphanic moment when he realizes what he has learned: “my stomach kind of fell as I felt how hard the world was going to be to me hereafter.”

At the end, the boy in “Araby,” while saddened as he understands a bit more about himself and his place in the world, must return to his family before he can become an adult. But Sammy is able to cross that threshold to adulthood; he leaves the supermarket, moving into the sunlight, as he walks out into the world.