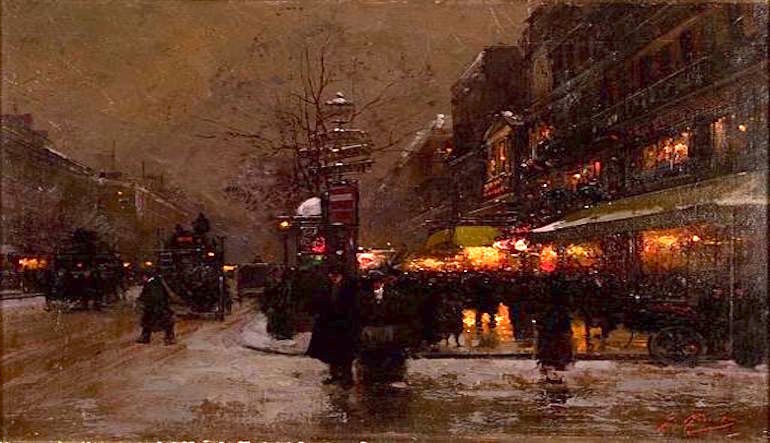 All stories that are written as a response to another story act as a type of mirror. In Joyce Carol Oates’ collection Marriages and Infidelities, published in 1972, five of the stories respond to stories by earlier master writers—Franz Kafka, Henry David Thoreau, Anton Chekhov, Thomas Mann, and James Joyce. Oates referred to these stories as “re-imaginings of famous stories” in an interview in 1972. She went on to say: “These stories are meant to be autonomous stories, yet they are also testaments of my love and extreme devotion to these other writers; I imagine a kind of spiritual ‘marriage’ between myself and them, or let’s say our ‘daimons’ in the Yeatsian sense—exactly in the Yeatsian sense, which is so exasperating and irrational!” There’s something wonderful in the thought of the subconscious of Joyce meeting with that of Oates to create her story “The Dead,” a response to his story of the same name.

The original story by Joyce is iconic; the final story in Dubliners, it follows Gabriel Conroy as he and his wife Gretta attend a dinner party at his aunts’ house in Dublin on the Feast of the Epiphany. By the end of the story, when Gabriel and Gretta have returned to their hotel room, Gabriel has learned of his wife’s long-dead love and his understanding of his relationship with his wife as well as the relationship between the living and the dead has been changed forever. Joyce sets up a triangle, of sorts, as the long-dead lover inserts himself into Gabriel and Gretta’s relationship and into the narrative. Symbols of the theme of death are scattered throughout the story.

Oates both modernizes and feminizes the original story. Her version is told through the lens of Ilena Williams, a writer and English professor in upstate New York in the early 1970s. The story begins with Ilena’s addiction to prescription drugs, and the effect of that drug usage filters through the story and Ilena’s consciousness, creating somewhat of a haze as her thoughts often circle back and forth in time as the linear story unfolds. We learn of her marriage and subsequent divorce. We hear of Gordon, a lover during the marriage, and Lyle, a lover shortly after the marriage falls apart. And we meet a young student, Emmett Norlan, who comes round often to office hours and in whom she has little interest. She teaches in Detroit and, when the marriage is ending, she writes her bestseller novel entitled Death Dance.

In the final act of the story, we arrive at a party that we would expect from Joyce’s story. Ilena returns to Detroit from Buffalo where she has been living and teaching. She is now a literary superstar, and everyone gathers around her at a party given in her honor. It is there that she learns that Emmett Norlan has died. Gordon, the former lover, arrives, and he then takes her back to her hotel. He tells her more about Emmett’s death, and she is distraught by this news, much the same way that Gretta is upset in recalling the details of her young lover’s death. All of Ilena’s partners and lovers begin to merge together in her mind:

She recalled her husband’s face: a look of surprise, shock. She had betrayed him. His face blended with the face of her student, who was dead, and Gordon’s face, pressed so close to her in the dark that she could not see it. The bed was crammed with people. Their identities flowed sluggishly, haltingly, from vein to vein. One by one they were all becoming each other.

However, Oates isn’t content with merely mirroring the arc and the themes of the Joyce story. She is also interested in reflecting the way in which Joyce inserted autobiographical elements. Gabriel is a writer like Joyce; Gretta is from the same rural area of Ireland as was Joyce’s wife Nora; Gabriel questions the current state of Ireland and her people as did Joyce. Ilena, in Oates’ version, has many features that might remind us of Oates. Ilena is a writer and a professor; she has had tremendous, early success as a writer; she was brought up Catholic; she is approximately Oates’ age at the time of the story. The prescription drug use seems to be a point where Ilena and Oates separate, as though Oates is imagining a direction in which her life might have gone but did not. Oates’ novel them wins the National Book Award in 1970; Ilena’s best-selling novel is only a finalist. The two also part ways when it comes to marriage and divorce; Oates married in 1961, remaining married until her husband’s death in 2008.

Perhaps the most striking commonality, however, is the fact that Ilena’s newest work mirrors that which we are currently reading:

. . . her latest work, a series of short stories in honor of certain dead writers with whom she felt a kinship. ‘I don’t exist as an individual but only as a completion of a tradition, the end of something, not the best part of it but only the end,’ she explained, wondering if she was telling the truth or if this was all nonsense, ‘and I want to honor the dead by reimagining their works, by reimagining their obsessions . . . in a way marrying them, joining them as a woman joins a man . . . spiritually and erotically . . .’

And it is in Ilena’s rumination on her marriage that we also hear echoes of the way in which Oates talked about responding to a master’s story. After Ilena’s marriage has dissolved, she thinks this about marriage:

Marriage was the deepest, most mysterious, most profound exploration open to man: she had always believed that, and she believed it now. Because she had failed did not change that belief. This plunging into another’s soul, this pressure of bodies together, so brutally intimate, was the closest one could come to a sacred adventure; she still believed that.

Ilena may be thinking about marriage, but Oates seems to be considering the process of writing, highlighting the particular joy in responding to a master’s story.