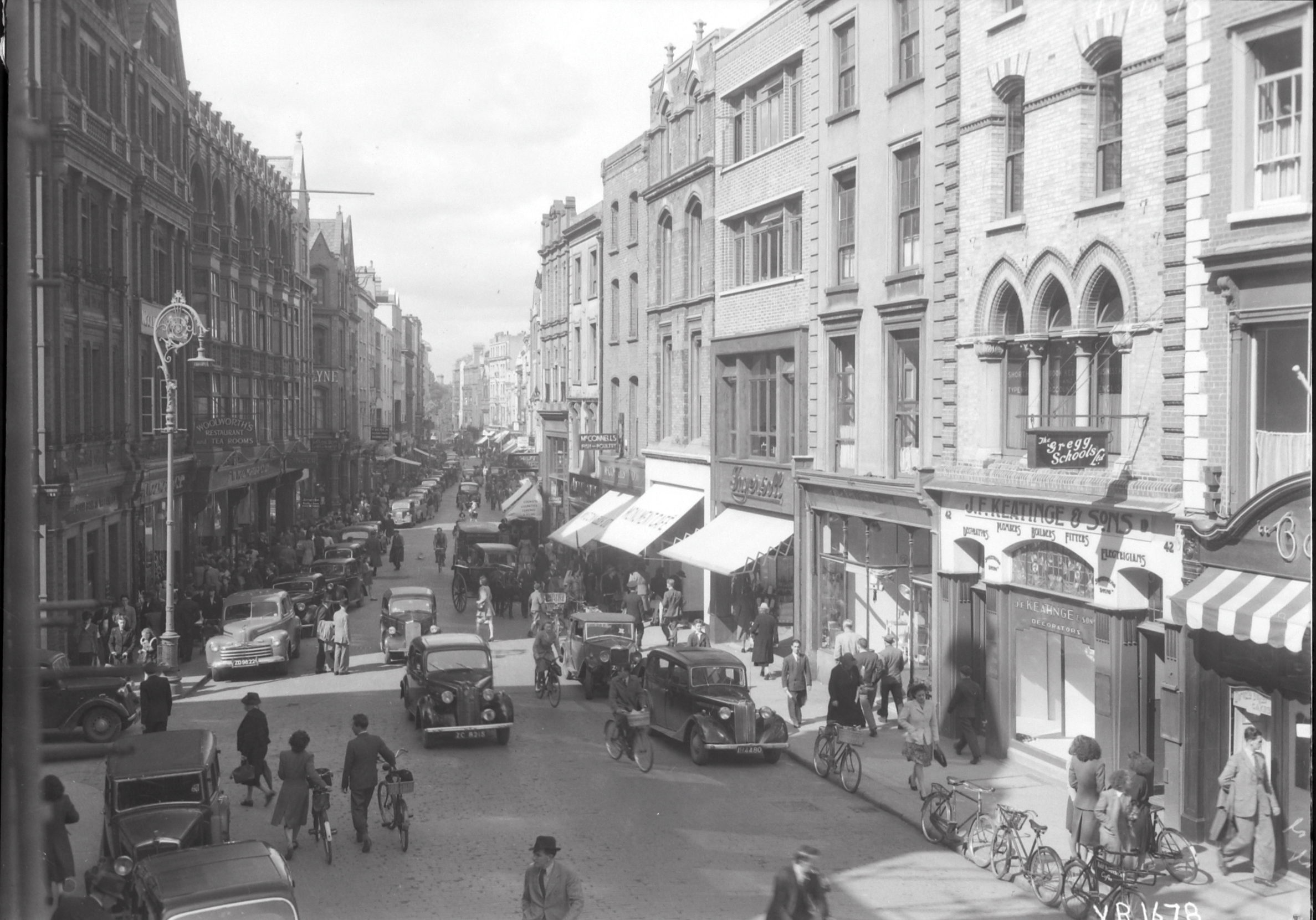 Two Irish masters of the short story, one following quite literally in the other’s footsteps: William Trevor’s story “Two More Gallants,” published in 1986 in the collection The News From Ireland, takes as its subject James Joyce’s story “Two Gallants” from The Dubliners, published in 1914. Trevor pays homage to Joyce and marvels at his legacy, but he also uses his version of the story to suggest that life in Dublin has changed little during the 20th century. And while Joyce’s story looks to the separation between thoughts and actions, Trevor’s also examines truths and lies. Both the stories, in their focus on patriarchal attitudes and ethical behavior, are (sadly) still relevant today.

One of the lesser known stories in The Dubliners, Joyce’s story takes place in the early 20th century, as it follows two flaneurs—Corley and Lenehan—as they wander the streets of Dublin. As the men walk, Corley recounts his affair with a woman and his plan to convince her to steal from her employer. The men separate when Corley goes to the woman, and Lenehan continues on his own, retracing many of the steps he had taken earlier, as he waits to see if the deed will be done.

A gallant, of course, is a man who pays attention to women, and these men certainly do that. The story—while attending to Joyce’s ever-present interest in the state of Ireland and its people—focuses on the difference between our thoughts and our actions. When Lenehan is alone, he begins to question his life and its trajectory:

He was tired of knocking about, of pulling the devil by the tail, of shifts and intrigues. He would be thirty one in November. Would he never get a good job? Would he never have a home of his own? He thought how pleasant it would be to have a warm fire to sit by and a good dinner to sit down to.

The men meet up toward the end of the story, and Lenehan is desperate to know whether Corley was successful. Tellingly, the men are on a dead-end street when Corley finally reveals what happened:

Corley halted at the first lamp and stared grimly before him. Then with a grave gesture he extended a hand towards the light and, smiling, opened it slowly to the gaze of his disciple. A small gold coin shone in his palm.

And there the story ends. It is up to the reader to decide whether Lenehan is, indeed, a disciple of Corley’s or whether he will change his behavior to line up with his thoughts. Joyce nicely shifts the moral center of the story to the reader.

Trevor’s opening sentence sets the stage for his homage and response:

You will not, I believe, find either Lenehan or Corley still parading the streets of Dublin, but often in the early evening a man called Heffernan may be found raising a glass of Paddy in Toner’s public house; and FitzPatrick, on his bicycle, every working day makes the journey across the city, from Ranelagh to the offices of McGibbon, Tait & FitzPatrick, solicitors and commissioners for oaths.

How much Trevor manages in the span of a single sentence! A first-person narrator, a direct reference to the fictional Joycean characters, and the description of his own two flaneurs, one who is drinking in the pub and the other traveling to his place of business. We quickly learn that these two men are no longer speaking, but that thirty years earlier—in the mid-fifties—the narrator and both men had attended college together.

Trevor sets up a clear parallel: Heffernan is Corley and FitzPatrick is Lenehan. While the narrator had known both men in college, he hadn’t known them well, and FitzPatrick, a year out from the events of the story, recounts it to the narrator. Heffernan had told FitzPatrick a story about Corley and Lenehan and “at first FitzPatrick was confused by the story, imagining it to be about a couple of fellow-students whom he couldn’t place.” The attitudes and actions of these men, then, seem so familiar to FitzPatrick that he thinks Heffernan is recounting a contemporary story. The Dubliners—particularly the male Dubliners—seem to have changed little in the intervening fifty years.

Heffernan then allows that this is from a Joyce story but that he has learned from FitzPatrick’s maid that she was the model for the girl in the Joyce story. Heffernan tells his Joyce professor this tale as well, and the professor visits the maid to have the story told first-hand. It is only then, when FitzPatrick hears this conversation, that he realizes that Heffernan has persuaded the maid to fabricate the tale. But he doesn’t pass judgment at this point. He merely thinks that this is the end of the story: “In his lazy way FitzPatrick assumed that the falsehoods which had been perpetrated were the be-all and end-all of the affair, that Heffernan’s pride—now clearly revealed to him—had somehow been satisfied.”

But then Heffernan persuades FitzPatrick to attend a meeting of The Society of the Friends of James Joyce. For an hour, the esteemed professor regales the crowd with his discovery of the model for the girl in the story. Here, we can feel Trevor poking a bit of fun, both at academics and at Joyce’s legacy. The crowd is wowed and amazed. FitzPatrick begins to feel a bit of remorse: “The packed lecture-hall had accepted as fact all that had been stated, yet none of it was true.” He now wishes that he had sought out the professor to tell him the truth but, like his twin Corley, his thoughts do not morph into actions.

Instead, the professor is humiliated by Heffernan, who tells the full story to the crowd. And, as FitzPatrick reports of the professor,

You could sense him thinking that he suddenly appeared to be unreliable, asinine and ridiculous. In front of the people who mattered to him most of all he had been exposed as a fraud he did not feel himself to be.

Afterwards, FitzPatrick refuses to have a drink with Heffernan, telling him “to go to hell” and the relationship is severed forever. So FitzPatrick finally acts in accordance with his thoughts—in a way that Corley does not, at least not on the page—but he still regrets that he did not act earlier.

Trevor ends the story by focusing on the attributes in the two women that led to their actions—love in the Joyce story and “miserliness” in his own—and he then broadens the ending to consider all of our faults: “FitzPatrick touched upon his own inordinate laziness, finding a place for that also in our cobweb of human frailty.” Unlike Joyce, who allows the reader to determine Corley’s future actions, Trevor places blame, first on his characters, and then on each of us.