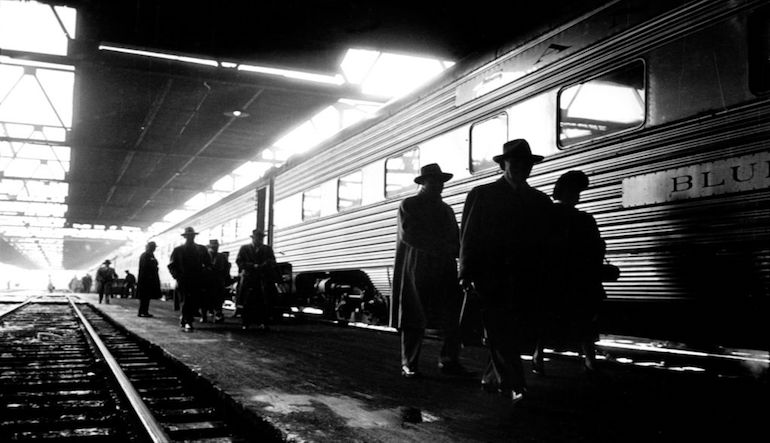 In 1983, Raymond Carver included “The Train” in his collection Cathedral; he dedicated the story to John Cheever and from the first words of the story, where one of the characters from a Cheever story is named, we see that Carver’s story will be responding to Cheever’s classic tale “The Five-Forty-Eight.” Cheever’s story was originally published in The New Yorker in 1954 and included in his collection The Housebreaker of Shady Hill and Other Stories in 1958.

“The Five-Forty-Eight,” a story where motifs of dark and light are threaded throughout, follows a man named Blake—written in a close third person point-of-view—as he leaves his office in midtown Manhattan and heads home to the suburbs. He is followed by a woman, Miss Dent, who had been his secretary for a time and with whom, we learn, he had a brief affair and then promptly fired. Blake tries to escape her on his walk to Grand Central but she successfully follows him and ends up sitting next to him in his train car, a gun hidden in her purse. At the suburban train station, after everyone else has set out for home, she forces him onto his knees, telling him to put his face in the dirt:

Blake waits for a bit, and then he lifts his head and watches her as she returns to the other platform.

He raised himself out of the dirt—warily at first, until he saw by her attitude, her looks, that she had forgotten him; that she had completed what she had wanted to do, and that he was safe. He got to his feet and picked up his hat from the ground where it had fallen and walked home.

Although Cheever’s story is written in a close third person point-of-view, there are two points in the story—once at the start and another towards the end—when the point-of-view opens up more broadly. At the beginning of the story, we are not yet aware of the relationship between Miss Dent and Blake, and how he has treated her, and so we are very much attached to Blake’s perspective: “He turned and walked toward the glass doors at the end of the lobby, feeling that faint guilt and bewilderment we experience when we bypass some old friend or classmate who seems threadbare, or sick, or miserable in some other way.” The use of the first person plural works to equate us with Blake, to include the reader in the point-of-view. The next paragraph continues in this vein as it begins: “Walking in the city, we seldom turn and look back.”

But then the first person plural perspective disappears. We learn of Blake’s indiscretions and our sympathies begin to toggle between the two characters. Towards the end, though, after they have gotten off the train and are waiting for the others to leave, the “we” voice returns: “The last man looked at his watch, looked at the rain, and then walked off into it, and Blake saw him as if they had some reason to say goodbye—not as we say goodbye to friends after a party but as we say goodbye when we are faced with an inexorable and unwanted parting of the spirit and the heart.” Here, the first person plural seems to implicate us in Blake’s actions; we, too, are guilty.

Carver’s story begins as Cheever’s story is ending: “The woman was called Miss Dent and earlier that evening she’d held a gun on a man.” Carver goes on to summarize the scene in the dirt, changing the details slightly, as we’re now in Miss Dent’s point-of-view. She is more in control, it seems, and Blake seems more afraid: “She tried to make him see that he couldn’t keep trampling on people’s feelings. ‘Be still,’ she’d said, although the man was only digging his fingers into the dirt and moving his legs a little out of fear.”

Miss Dent sits in the train station’s waiting room, and is accompanied by a couple who are in the midst of an argument. They are not stock characters out of a typical suburban Cheever story: the man has no shoes and the woman is speaking Italian. They argue with each other and we—along with Miss Dent—have a hard time understanding the context of their discussions. The woman then begins to antagonize Miss Dent:

“You don’t say much,” the woman said to Miss Dent. “But I’ll wager you could say a lot if someone got you started. Couldn’t you? But you’re a sly boots. You’d rather just sit with your prim little mouth while other people talk their heads off. Am I right? Still waters. Is that your name?” the woman asked. “What do they call you?”

Here, as in the Cheever, we are being accused, along with Miss Dent, of passing judgment and making assumptions.

Just as Miss Dent is about to start speaking, they hear the train approach. The point-of-view broadens from just that of Miss Dent to all three characters—“…it was easy for the people on the platform to see that he train was nearly empty. But this didn’t surprise them. At this hour, they were surprised to see anyone at all on the train.”—and then shifts entirely to the point-of-view of the passengers on the train:

The few passengers in the cars looked out through the glass and thought it strange to find these people on the platform, making ready to board a train at this time of night. What business could have taken them out? This was the hour when people should be thinking of going to bed.

We then see the three characters boarding the train and they are described to us again, this time through the passengers’ point-of-view. Because they don’t know what we know, “The passengers naturally assumed that the three people boarding were together; and they felt sure that whatever these people’s business had been that night, it had not come to a happy conclusion.”

In the final paragraph of the story, Carver changes the point-of-view to the conductor, then to the engineer and finally to a more omniscient voice, looking down on the train: “The train began to move forward. It went slowly at first, but it began to pick up speed. It moved faster until it once more sped through the dark countryside, its brilliant cars throwing light onto the roadbed.” Carver, then, responds to Cheever by writing a sequel to his story, which shares characters, an understanding of the power of a shifting point-of-view, and a final homage to dark and light.