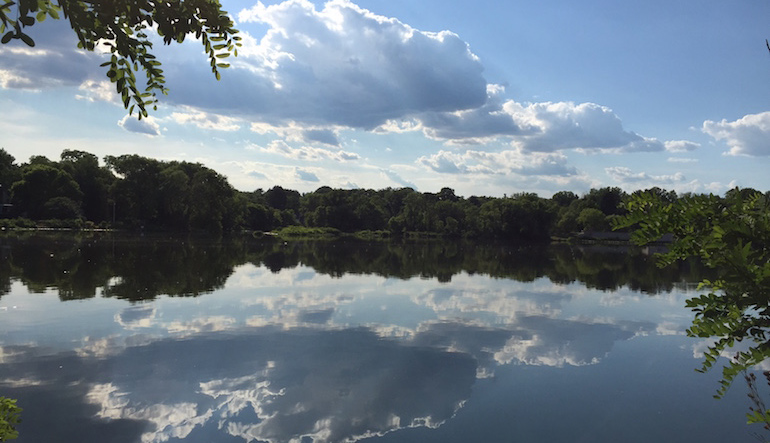 At a panel entitled “Source Texts” at the Brooklyn Book Festival on September 18, 2016, Elizabeth Nunez, Salman Rushdie and Michael Seidlinger discussed the ways in which their recent novels responded to other texts. In the course of the hour-long panel, moderated by Baz Dresinger, the writers discussed the many ways in which fiction can respond to fiction. Of particular note was the impetus for using a particular source text—what inspired the response—and the extent to which a retelling can or should stand on its own without an intimate knowledge of the original.

Elizabeth Nunez used Shakespeare’s King Lear as the starting point for her novel Even in Paradise, published in 2016. She grew up in Trinidad reading Shakespeare, living in a home where lines from Shakespeare were routinely tossed about: “More matter with less art,” her mother would say. Nunez—whose earlier book Prospero’s Daughter is a retelling of The Tempest—had read Lear multiple times and been to many productions. She was most interested in the two older daughters: she wanted to understand why they were so evil. Her modern retelling, which takes place in the Caribbean, while focusing on the father and the decisions he makes about his land, unpacks the motivations of the daughters and also focuses on the impact of race.

Rushdie’s most recent novel, Two Years Eight Months and Twenty-Eight Nights, published in 2015, took its cue—clearly shown in the title—from One Thousand and One Nights. Rushdie explained how his novel was inspired by the type of storytelling in the classic text; he wondered whether there was a way to take the fable and write a story about the world today. The technique used in One Thousand and One Nights—stories within stories—is one that he chose to replicate in his work. A fable at its best is also a picture of the real world; Rushdie’s narrator says “To recount a fantasy, a story of the imaginary, is also a way of recounting a tale about the actual.”

Many of us read—or perhaps were supposed to read—The Stranger by Albert Camus, published in 1942, when we were in high school or college. Michael Seidlinger read it—and loved it—in college, and he began to wonder what it would be like to modernize the classic text. Challenged by a friend to do just that, he wrote The Strangest, published in 2015. I read Camus in French class in 11th grade; I remember walking through the halls of my high school quoting the classic opening line: “Aujourd’hui, maman est morte.” Right from the start of Seidlinger’s novel, we know we’re in for something different, then, when the novel begins: “Someone died, I don’t know.”

In all three of these cases, the source texts are well-known and canonical. Readers bring their knowledge of the source text to the retelling and that can obviously frame their read of the newer version. Nunez’s choice to place her novel in the Caribbean—with white protagonists—necessarily makes race a central focus of the story. And while the book doesn’t require a knowledge of King Lear, the shadow of Shakespeare hangs over the novel. Part of the fun of reading a novel based on a work that most know well is considering the links between the two and how the author has molded the original for the newer purpose.

While canonical, the characters and narrative arc of Camus’ work may be less well-known. The joy—or perhaps despair—of reading Seidlinger’s novel is the way in which he brings our world to bear on the original. Social media, in particular, is a central motif throughout the book. While using Camus as a starting point, The Strangest moves far beyond the original text. Lack of knowledge of the original doesn’t impact the read in any way; the book clearly stands on its own.

Movies adapted from books often suffer from prior knowledge of the text; the world that has been created in our heads collapses into someone else’s vision, which often feels wrong and misguided. Rushdie talked about writing the screenplay for Midnight’s Children; he needed to condense the 600 page novel down to a 110 page screenplay. He views the two as extremely different: the novel is “funnier and wilder” while the film is more emotional. The movie, Rushdie believes, serves as a companion piece to the novel. And in this case, he thinks that while those who had read the book struggled with the movie, those who had no prior knowledge loved it.

Perhaps most telling—as we consider the relationship between classic texts and responses—was Rushdie’s comment that everything necessarily comes from something else; a work that directly responds to another, then, carries with it the soul of the original. The writer’s job is to provide the reader with what needs to be known in order to understand the text at hand.