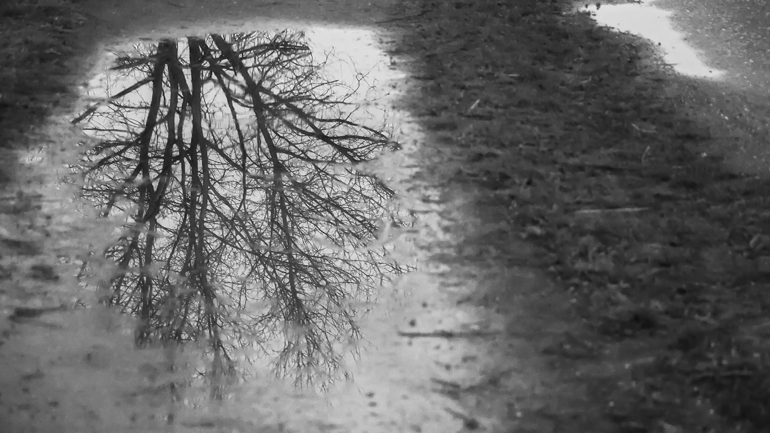 In Nabokov’s story, an older couple travels to visit their son in a sanatarium, bringing a birthday gift. They are not allowed to see him and they return home, where the mother reflects on the son through a series of photographs, and the father decides he wants to bring the son home. The phone rings twice, seemingly misdials, and the story ends as the phone rings for a third time.

Moore’s storyline is similar and yet modernized: a mother goes to visit her son in an institution, bringing the identical birthday gift: a basket of jams. She is with Pete, a man she had been with for years, but who has now largely removed himself from her life. Unlike Nabokov’s story, they are allowed to see her son, and they have an extended visit. When they return home, the mother considers the photos of her son on refrigerator magnets, the photos reflecting the same ages as the photos in Nabokov’s story. The phone rings, twice, and with the second call, the mother claims that the caller-ID identifies the call as coming from Pete’s apartment. We then learn that she lied, that she could not read the caller-ID without her glasses. The story ends with a third ring, and the mother answers the phone.

Moore’s title is so emblematic of her love of wordplay. While “Referential” obviously speaks to the connections between the stories, it is also reflective of the made-up illness that the son in Nabokov’s story is diagnosed with: “referential mania.” Moore revised the story for her collection, changing the first word in the story to “Mania” so that the title and the first word work together, much as in a poem.

Nabokov’s story is echoed in Moore’s storyline but also, throughout the story, lines are either picked up directly from the original, or modified just slightly. For example, the sons in both stories try to commit suicide. Here’s Nabokov’s telling of that event:

The last time the boy had tried to do it, his method had been, in the doctor’s words, a masterpiece of inventiveness; he would have succeeded had not an envious fellow-patient thought he was learning to fly and stopped him just in time. What he had really wanted to do was to tear a hole in his world and escape.

And here’s how Moore mirrors and refracts it:

The last time her son had tried to do it, his method had been, in the doctor’s words, morbidly ingenious. He might have succeeded but a fellow patient, a girl from group, had stopped him at the last minute. There had been blood to be mopped. Once her son had only wanted a distracting pain, but then soon he had wanted to tear a hole in himself and flee through it.

Again we see how attuned Moore is to language. Her respect for Nabokov is evident in the way that she carefully copies the ebb and flow of his sentences. When she makes a change (“a masterpiece of inventiveness” to “morbidly ingenious”) she still allows for the echo by using words that begin with the same letters. In her additions and changes, her story is able to take on its own shape. The detail of “blood to be mopped” brings us right into that moment. And what a subtle and yet important difference she makes by having the son tear a hole “in himself and flee through it” rather than tear a hole “in his world and escape.”

Nabokov often included encoded symbols in his work; for this story, he indicated that there was another, hidden story behind the first. Many literary critics have written about the existence of that second story and the meaning behind so many of the symbols here, including the numerical sequences that pepper the text. Moore plays with this as well, obliquely referencing these analyses in multiple spots: “There would be clues in the words on pages with numbers that added up to his age: 97, 88, 466. There would be other veiled references to his existence. There always were.” We can practically feel Moore winking at us and at Nabokov here, as she pays homage to his love of hidden meaning.

At the end of Moore’s story, she references two other, earlier short stories, thereby creating a series of echoes and references, seemingly underscoring the fact that all short stories are connected to and reflections of others. Given that both of these stories were published prior to Nabokov’s, there also seems to be a hint that Nabokov may have also been responding to earlier works. The mother answers the third and final phone call as follows:

“Good evening,” she said loudly. What would burst forth? A monkey’s paw. A lady. A tiger.

But there was nothing at all.

All three of the thoughts that she has (“A monkey’s paw. A lady. A tiger.”) are far removed from the realism of the story. “The Lady, or the Tiger,” a short story by Frank R. Stockton, published in 1882, is one that has made its way into popular culture. The ending is always ambiguous, the decision between the lady and the tiger left up to the reader. A lesser-known story, “The Monkey’s Paw” by W. W. Jacobs, was published in 1902. A couple receives three wishes about their son. They wish that he would die and then that he would come back to life. There is a knock on the door, and it is then that the father wishes that the son would die again. When the door is opened, there is no one there.