Writers love to create writer characters, so much so that fictional writers are their own sub-character set. Maybe it’s because we understand the torture of the artistic monkey better than anything else; creating fictional writers is one way of following the adage of writing what you know. Or perhaps we make our characters writers because we like to project our writer selves into the fictional world as a way to exhaust our fantasies and exercise our demons. Our Author Avatars can do the things we as writers cannot. They can have fame and success. Likewise, they can become vessels for our worst fears—failure and self-destruction.

As I reader/viewer, I love the fictional writer, no matter how unbelievable the given circumstances. I realized recently that I can trace this fascination to my childhood. When my daughter Liliana turned seven last week, she wanted nothing more than a Doc McStuffins’ doctor kit. For those not in the know (ie. non-parents), Doc McStuffins is the protagonist of her self-named show, in which she is an accomplished toy doctor. Liliana wants to be a doctor, making Doc McStuffins her career idol. (We’re still at the stage where she hasn’t started venerating real people.)

Thinking back, at her age I already knew I wanted to be a writer (although I did have a brief desire to be dancer Ann Miller—I think it was her ankle strap shoes). And like Liliana, I didn’t yet idolize real writers. Instead I delighted in a fictional writer who continues to inspire me today: writing detective Jessica Fletcher from my grandmother’s favorite show, Murder, She Wrote.

Jessica Fletcher, played by the always-in-style Angela Lansbury, defined how I viewed “Writer” as a career when I was a kid. A physically fit retired English teacher turned mystery writer, she was smart, independent, and respected for her work. Like Snoopy, her mystery novels were tapped out on a typewriter with rhythmic precision. When she wasn’t riding her bicycle around Cabot Cove (she never learned to drive), she traveled around the world to talk about her bestselling novels.

I adored her. The theme song, the typing, the successful publishing lifestyle, the fact that people just drove her wherever she needed to go—it was the stuff of this little girl’s dreams. 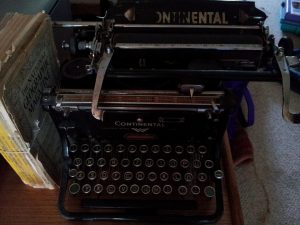 Yes, I played “J.B. Fletcher” instead of princess or ballerina or nurse or teacher. I’d borrow my grandmother’s glasses, perch them at the end of my nose, and explain to my Care Bears and Pound Puppies how I knew the Popple was guilty because he had dirt on his feet when he returned to the crime scene. But the mystery solving wasn’t all: I’d ride my bike humming the theme song. Sometimes I’d explain creating tension in a mystery novel to a select group of My Little Ponies, recreating some of the lectures on writing Jessica sometimes gave on her tours And, in a move what I believe shaped my future, my grandfather allowed me to type stories on his antique German Continental Typewriter (still humming the theme song).

For a little girl, Jessica was particularly inspiring because although she worked with men, and was frequently called upon by the male power figures for help, she wasn’t defined by them. A widow, her romantic life was never a major plot point. Sure, there were innocuous flirtations with town doctor Seth, but it didn’t steer the series (current television series should take note). Nor did the writers try to make her overly masculine (save her use of her initials to publish). The show, instead of romance or fashion, focused on Jessica’s intellect, superhero-like powers of observation and deduction, and keen comprehension of human behavior.

Jessica is not the first or last writing detective—the crown at the moment is held by Richard Castle on the television show Castle. Mystery writers moonlighting as detectives is a popular premise, I think in part because it plays to writer vanity: writers are observant and have an uncanny understanding of motivation. Hence, writers have innate detective skills.

In the real world, even the non-mystery writers can benefit from honing their junior detective skills. My creative writing students frequently struggle with dialogue: either they refuse to write it, or their dialogue is completely unnatural. Others may also stumble at authentically creating human interaction, movement, and behavior on the page.

Therefore, one of my common assignments for all my writers is an hour of people watching. They are instructed to go to our Student Union Building during the lunch period (the busiest time), turn off all technology, and observe, preferably without interacting. The goal is to hone the inner detective: how do people walk, how do they change when they encounter different people and things, how do they talk, what do they seem to want . . . it’s an activity that can benefit any writer, even the most experienced. It’s easy to forget that whatever we write needs a seed of truth, even if that seed is only the way a character walks.

Surveillance skills aside, J.B. Fletcher defined success as a writer in my impressionable mind. Many writers sometimes feel like there is an expiration date on success. That if we don’t have a book with our name on it available for purchase by age 30, 35, 40 , or whatever your ‘scary failure’ age is, we aren’t writers and never will be. Silly as it is, I sometimes remind myself that Jessica didn’t become a successful writer until after her retirement. Even though she is fictional, there is no reason that writing has to be like ballet, where your career is dictated by a physical age.

Beyond her late life success, I also admired Jessica’s confidence and class. She wasn’t the tortured writer I’d be acquainted with in the coming years. Nor was she suffering from stunted beginnings. I like to believe that behind closed doors Jessica faced doubts and revisions and struggles like the rest of us. But to the world, and my seven year-old self, she was a writer rock star who adored her life. We all should take that note to heart even if our only success is writing a single page.

Next time, we’ll take a lesson from the physically and mentally tortured fictional writers of Stephen King. Until then, who were your childhood heroes?