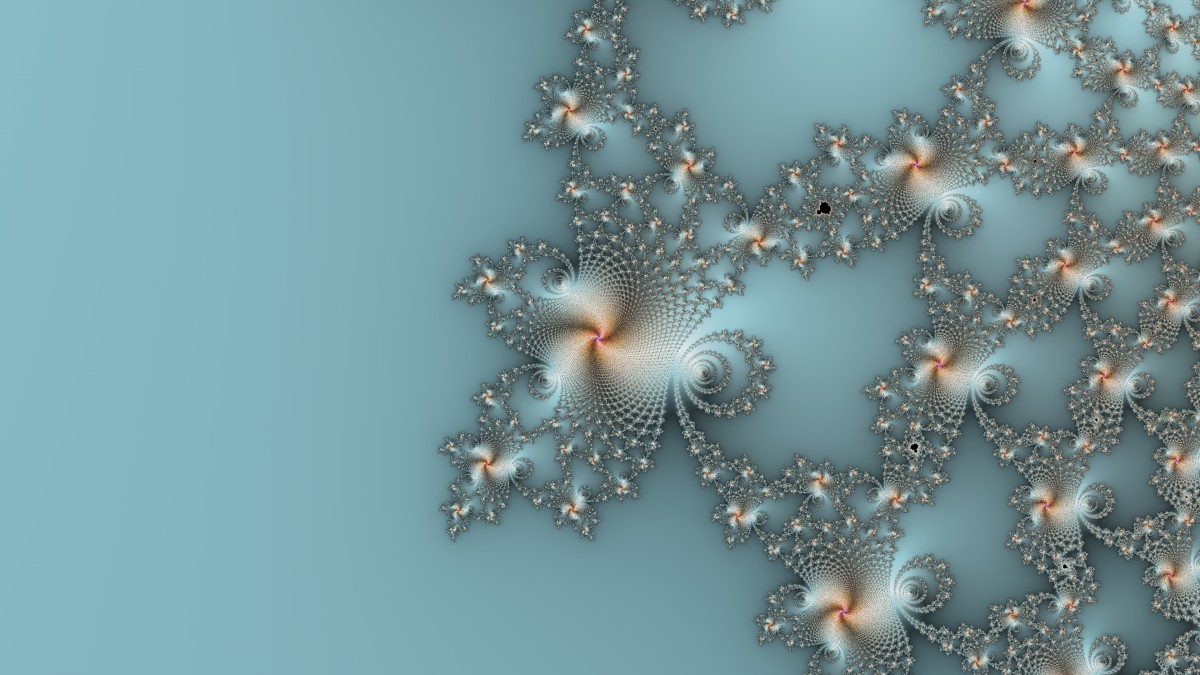 Fractals have been a buzzy concept for almost forty years, ever since Benoit Mandelbrot, the “father of fractals,” published his groundbreaking work, The Fractal Geometry of Nature, in 1982. A fractal is a repeating, self-similar shape (think of the branches of a tree or a Romanesco broccoli) that is an efficient way of continuous, self-organizing expansion; fractals have been used to analyze everything from the random dribs and drabs of paint in a Jackson Pollock masterpiece, to the fluctuations of cotton prices, to the distribution of the rings of Saturn. While some critics dismiss fractals as faddish or overly applied, they do offer a compelling vision of a natural world governed by order, pattern, and predictable expansion. After watching the news cycle unfold over the last five years, I can tell you that envisioning the world as an organized and predictable place feels mighty tempting.

In her 2019 book, Meander, Spiral, Explode, Jane Alison devoted a brief chapter to fractals and story shape, referencing Clarice Lispector’s short story “The Fifth Story.” “I was complaining about the cockroaches,” begins the narrator, and we are taken into a story that stops and starts in five parts, growing from a woman with a cockroach problem, to a woman laying down poison, to a woman laying down poison and awaking to the devastation she has wrought in her kitchen (“I am the first to observe the dawn breaking over Pompei,” she says), to a woman who kills cockroaches and must decide if she will continue killing cockroaches forever, and finally to a woman with a cockroach problem who has an oblique and fleeting thought that perhaps she and the cockroaches share an identity. Remember that fractals repeat. What Lispector has done in her ingenious story is zoom out from her premise five times, at each step revealing that the shape of the whole is identical to the shape of any individual component. The story is the same, expanded or minimized.

But going beyond the short story form, is it possible to discern a fractal pattern at a larger scale? Thinking about fractals as repeated shapes, can they, for example, illuminate our understanding of a larger narrative, and give us new insights into the novel?

“Mother died today. Or, maybe, yesterday; I can’t be sure. The telegram from the Home says: YOUR MOTHER PASSED AWAY. FUNERAL TOMORROW. DEEP SYMPATHY. Which leaves the matter doubtful; it could have been yesterday.” These scant sentences comprise the opening paragraph of The Stranger by Albert Camus, his 1942 novel about Meursault, a French Algerian who commits murder and is sentenced to death, but not before he comes to peace with the meaninglessness of his own life and the inevitability of death. The novel illustrates Camus’s own philosophy of Absurdism, a belief grounded in the conflict between man’s unquenchable desire for meaning, and the universe’s utter indifference to that desire. The only way for a person to achieve contentment, Camus believed, was to embrace the absurdity of living inside this conflict, to enjoy the freedom of life without a relentless search for meaning, and to pursue personal and transient experiences until death. Viewing this opening paragraph as a fractal shape, inside which Camus’s philosophy is embedded, we can see how Camus repeated this same shape throughout the text in sentences, in scenes, and over the novel as a whole, expanded or contracted but repeated all the same. As in Lispector’s story, the narrative is the same zoomed in or out.

The opening line, “Mother died today,” sets Meursault in motion to arrive at his epiphany about the “benign indifference of the universe.” He attends a vigil at the Home, his mother’s former residence for the aged, where he does not cry despite being glared at by the other mourners in attendance. The death of a mother being, for most men, a profoundly sad event, Camus intended Meursault’s non-reaction to provoke a critical and even hostile response. “In our society any man who does not weep at his mother’s funeral runs the risk of being sentenced to death,” he said. “I only meant that the hero of my book is condemned because he does not play the game.”

“Mother died today.” In the swirling chaos of the universe, death is the only guarantee.

“Or, maybe, yesterday; I can’t be sure.” The inevitability of death makes its timing and circumstances—whether in a warm bed at the end of a long life, or whether executed by the state for murder—in Camus’s view, meaningless.

“The telegram from the Home says: YOUR MOTHER PASSED AWAY. FUNERAL TOMORROW. DEEP SYMPATHY.” The brusque manner in which this life-altering news is delivered is comical and absurd, not unlike former Secretary of State Rex Tillerson learning he’d been fired by a presidential tweet in 2018. By delivering the news to Meursault in this way, the Home has attempted to superimpose a rational order on a random event. Mother hasn’t simply died, but passed away, a small idiomatic attempt by the Home to break the news gently. A funeral has been planned so that Meursault and the other mourners may say their goodbyes and pray for her soul to enter Heaven, and the Home extends their deepest regrets for what must, they assume, be an unbearable loss. Throughout the novel, Camus repeats this pattern of random events occurring, followed by attempts to rationalize and find meaning in them. Meursault kills a man on the beach and is tried for his crime. At the trial, both the prosecutor and Meursault’s own lawyer spin rational explanations for his behavior, but Camus resists this. “Really there wasn’t any very great difference between the two speeches,” he tells us. The universe is indifferent to attempts to derive meaning from events.

“Which leaves the matter doubtful; it could have been yesterday.” Again we are told that in a chaotic universe, the timing and circumstances of a death do not matter. This will find an echo later in the narrative when, at Meursault’s trial, numerous witnesses are brought forward to attest to his stoic behavior both at his mother’s vigil and on the day following the funeral when he met a girl and went to a movie. His condemnation from the jury comes as much from his lack of emotion surrounding his mother’s death as from the fact he committed murder. Meursault has refused to “play the game” as Camus put it. He recognizes the absurdity of attempting to rationalize an irrational universe, and for this he is deplored by his fellow men. His redemption comes only when he realizes that recognition of this absurdity has brought him freedom.

So the shape of the opening paragraph is this: Death is inevitable. The circumstances of that death, or any other event, are meaningless. It is absurd to superimpose rational order on a random event. The universe does not care about your attempts to derive meaning from events. True freedom comes in recognizing this.

After his mother’s funeral, Meursault is summoned to his employer’s office and offered a position in Paris, to which Meursault responds with indifference. “He then asked if a ‘change of life,’ as he called it, didn’t appeal to me, and I answered that one never changed his way of life; one life was as good as the other, and my present one suited me quite well.” Meursault sees through to the meaninglessness of the offer, that the circumstances of his life will remain the same whether he lives in Algeria or France. Later that day, Marie, with whom he’s been spending time, asks Meursault if he will marry her. He says yes, but when she asks him if he loves her, he admits that he does not, that “her question meant nothing or next to nothing . . . it had no importance really.” After committing the murder, while Meursault awaits trial, he finds that he has readily adapted to his new circumstances. “I’ve often thought that had I been compelled to live in the trunk of a dead tree, with nothing to do but gaze up at the patch of sky just overhead, I’d have got used to it by degrees. I’d have learned to watch for the passing of birds or drifting clouds, as I had learned to watch for my lawyer’s odd neckties, or, in another world, to wait patiently till Sunday for a spell of love-making with Marie.” In each instance the pattern is repeated: Meursault recognizes the absurdity around him and finds comfort in rejecting others’ obsessive search for order and meaning.

The entire arc of Meursault’s neighbor Raymond follows the same path. Raymond is fixated on the idea that his mistress has cheated on him, a belief occasioned by the fact that he found a pawn ticket in her purse for two bracelets he doesn’t recall having seen. This random event leads him to spin a complicated web of revenge that involves framing her for prostitution, accosting her brother, and beating her bloody. Unable to see the irrationality of his actions, it is ironic later in the novel that Raymond, at Meursault’s trial, claims it is pure coincidence that brought Meursault to the beach at the time of the murder, that Meursault is innocent of everything save being a victim of chance. Camus presents Raymond as a prisoner to his own need for meaning and rationality; though it is Meursault who will be executed, he is the only character in the novel to experience true freedom. The shape of the opening paragraph is evident again and again, the macro and the micro replicating the contours of one another.

It is ironic, of course, to view Camus’s narrative in such an ordered way, given that the novel is itself a protracted argument against finding meaning in such order. But we gain a clearer understanding of Camus’s philosophical premise by seeing how it is embedded in every sentence, every scene, every arc. There are no superfluous motifs, no elements that do not conform to the shape. From a craft perspective, this fractal patterning goes beyond theme—it is the very DNA of the novel, and, once deciphered, is visible at any magnification. Whether this is a testament to Camus’s genius as a writer or his clear reasoning as a philosopher may be debated. But I venture that other novels may be analyzed in this way, offering readers and writers a deeper understanding of stories as conveyers of meaning.

This quest for meaning inside stories may ultimately be absurd within the confines of an indifferent universe, but humans, most of us anyway, are hardwired to see patterns in chaos. And this is perhaps the ultimate freedom Camus espoused, the freedom to create our own personal, transient meanings. “There is no longer a single idea explaining everything,” Camus said in his essay, The Myth of Sisyphus, “but an infinite number of essences giving a meaning to an infinite number of objects.” The shape therefore, the pattern, the meaning, is what you make it.

Elizabeth Gonzalez James' stories and essays have appeared in The Idaho Review, The Rumpus, PANK, and elsewhere, and have received numerous Pushcart Prize and Best of the Net nominations. Her debut novel, MONA AT SEA, was a finalist in the 2019 SFWP Literary Awards judged by Carmen Maria Machado, and is forthcoming, June 2021. Find out more at https://www.elizabethgonzalezjames.com.