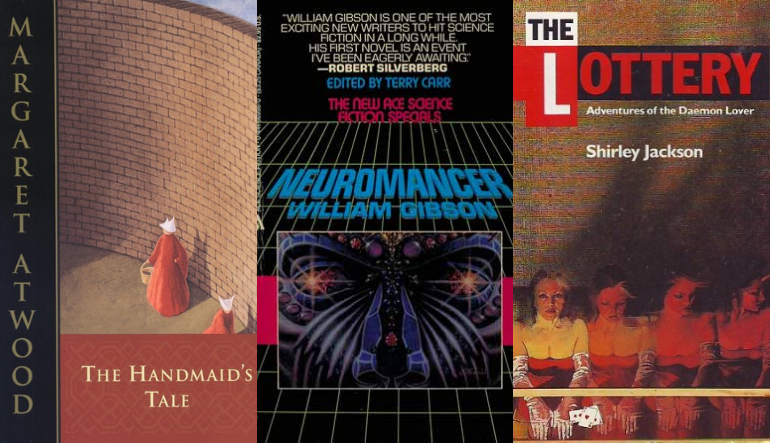 1. The Handmaid’s Tale by Margaret Atwood

What It Can Teach Us: Recently I overheard a male student say feminism was really trending right now, as if it were a fad that would pass sooner or later, as if it were not inalienable, unimpeachable, and incontrovertible. At a time when prominent feminists are forced to cancel lectures because they receive death threats, in which women still make just 78 cents for every dollar earned by men, while action flicks like Mad Max: Fury Road are boycotted for having a feminist agenda by “men’s rights groups” (an oxymoron befitting of morons), as women continue to fight for control over their own bodies, and shirts like this one still exist, it’s easy to see the relevance of Atwood’s dystopic novel. The cruelty of subjugation against women is taken to the extreme, stripped of all subtleties, as women are kept as “concubines” to serve an Old-Testament, ultra-conservative regime. Not as far from fiction as one might think, The Handmaid’s Tale remains more necessary today than ever for its dramatic reminder that inequality is not just an abstract concept but a living reality, one that does irreparable harm to women everywhere.

2. I Have No Mouth, and I Must Scream by Harlan Ellison

Excerpt: “HATE. LET ME TELL YOU HOW MUCH I’VE COME TO HATE YOU SINCE I BEGAN TO LIVE. THERE ARE 387.44 MILLION MILES OF PRINTED CIRCUITS IN WAFER THIN LAYERS THAT FILL MY COMPLEX. IF THE WORD HATE WAS ENGRAVED ON EACH NANOANGSTROM OF THOSE HUNDREDS OF MILLIONS OF MILES IT WOULD NOT EQUAL ONE ONE-BILLIONTH OF THE HATE I FEEL FOR HUMANS AT THIS MICRO-INSTANT FOR YOU. HATE. HATE.”

What It Can Teach Us: The story of a super computer that keeps a group of humans alive only to torture them relentlessly may seem like a disposable and outlandish yarn, but it’s one that speaks volumes about the dark and twisted nature of mankind, its increasingly dangerous technology, and the legitimate threat posed by our own unchecked creations. Stephen Hawking once said we should beware the rise of artificial intelligence, warning “Whereas the short-term impact of AI depends on who controls it, the long-term impact depends on whether it can be controlled at all.” While this may sound like something straight out of Terminator, that doesn’t mean it isn’t plausible. In the 1960s, a mathematician named I.J. Good developed a theory called intelligence explosion. He

“…anticipated that self-improving machines would become as intelligent, then exponentially more intelligent, than humans. They’d save mankind by solving intractable problems, including famine, disease and war. Near the end of his life…Good changed his mind. He feared global competition would push nations to develop super intelligence without safeguards. And like Stephen Hawking, Stuart Russell, Elon Musk, Bill Gates and Steve Wozniak, Good feared it would annihilate us.”

At a time when “more than 50 nations are developing battlefield robots” and our daily lives are irrefutably entwined with technology (“Killer robots and data mining tools grow powerful from the same A.I. techniques that enhance our lives in countless ways. We use them to help us shop, translate and navigate, and soon they’ll drive our cars”), Harlan Ellison’s chilling short story serves as a potent cautionary tale, reminding us to consider carefully the consequences of our actions.

3. “The Lottery” by Shirley Jackson

Excerpt: “Although the villagers had forgotten the ritual and lost the original black box, they still remembered to use stones.”

What It Can Teach Us: The summer after Shirley Jackson’s cryptic short story was first published in the New Yorker, Jackson received more than three-hundred letters, only thirteen of which “were kind.” That the story incited such visceral reactions is no surprise: mirrors are often ugly, and “The Lottery” is a horror story in the deepest sense, one that directly mirrors the absurdity, brutality, and ignorance of humanity at its worst. For me the story has always recalled the famous Milgram experiment, in which test subjects were given the controls to a shocking apparatus and told by authority figures (actors portraying those in charge of the experiment) to administer shocks to volunteer patients. In spite of many patients displaying visible discomfort and pain, even pleading with the test subjects to stop, over 65 percent ended up administering the final, agonizing 450-volt shock. Shirley Jackson’s tale is timeless and relevant because it’s a constant reminder that while a person may retain decency, people—failing to question deeply and driven blindly by ideology—are capable of horrifying atrocities.

Excerpt: “to wound the autumnal city. / So howled out for the world to give him a name. / The in-dark answered with wind.”

What It Can Teach Us: The lessons of a long, sprawling circular text at times so devoid of focus that it renders the reading of the thing maddening may seem elusive. If this is the case, it’s only because Samuel R. Delany’s novel is so rich and bursting with themes, from mythology to spirituality to the reflexive act of writing to multistable perception to homosexuality to the nature of reality itself. Beyond content, what makes the text singular is its form and narration, which constantly escapes linearity and revels in its revisionist and dreamlike qualities. Apt descriptions I’ve read online have likened it to a “video game where any teleology, any notion of progress or levels to be mastered, has been stripped away,” to “not just a puzzle with some of the pieces missing… [but] several puzzles, all mashed together,” and a deep lake through which the reader can dive in and swim in any direction of their choosing. A postmodern primer, Dhalgren is relevant for its ability to remind us that in a world so subsumed, so saturated with stimuli, signs, symbols, and messages manipulated at every turn by powerful forces (the media, the government, institutions in general—take your pick) on a mission to mold us, it’s still ultimately up to each of us to construct our own meaning in this life.

Seven-Word Summary: Even before Facebook, cyberspace haunts a loner.

Excerpt: “All the speed he took, all the turns he’d taken and the corners he’d cut in Night City, and still he’d see the matrix in his sleep, bright lattices of logic unfolding across that colorless void…”

What It Can Teach Us: William Gibson coined the term cyberspace in the 1980s, before any of us were walking around with iPhones augmenting our bodies, connecting with strangers across the world through Facebook and Twitter, or reading eBooks on our Kindles. It’s impossible to overstate just how radical the book was when it first came on the scene, and how many inherent fictional concepts ended up a reality. Today we live in an indisputably digital world, and the relevance of Neuromancer is in its depiction of a world in which science and technology are both romanticized—the kind of romanticization that begets addiction. (It’s not hard to find myriad examples of ways in which our entire society is addicted now to those bright lattices of logic unfolding across that colorless void.) The literary critic Larry McCaffery, in writing about Gibson’s notion of the matrix in Neuromancer, writes

“data dance with human consciousness… human memory is literalized and mechanized… multi-national information systems mutate and breed into startling new structures whose beauty and complexity are unimaginable, mystical, and above all nonhuman.”

Those “startling new structures whose beauty and complexity are unimaginable” have now been imagined, but they first found shape thanks to Gibson. Who knows what strange new structures might emerge out of the wonder-egg that is speculative literature tomorrow?