Home
»
Uncategorized
»
Fleas Are for Lovers 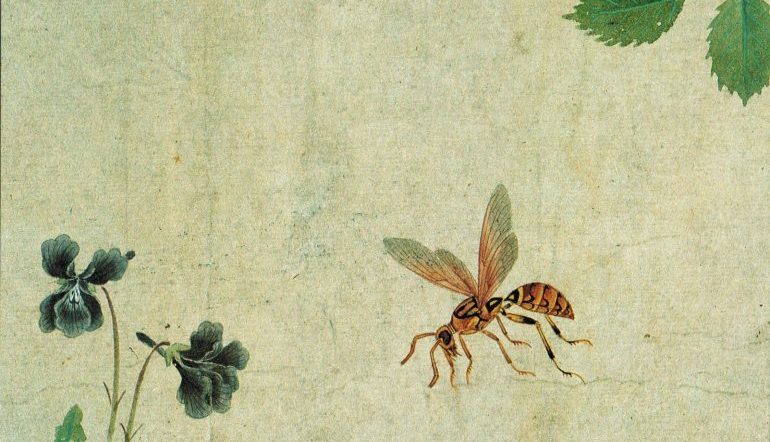 In high school I bought a lime green velvet pea coat from the garage sale of an elderly woman who lived up the street. Why she owned it in the first place I don’t know, as it was Jimi Hendrix-worthy in its boldness. The coat was huge on me and smelled like a musty basement, but I loved it. Even though it was still too warm for a winter coat I wore it to school and was feeling pretty good until I realized there were black dots moving all over it, disappearing from one sleeve to appear on the other seconds later. My awesome new used coat had fleas.
The flea is generally reviled as a pest, a harbinger of disease whose starring role in the Black Death is firmly planted in collective memory like parasitic hooks in rat flesh. But once upon a time the flea was also a popular emblem of erotic love, most famously illustrated in John Donne’s poem, appropriately titled “The Flea,” which seems to be the poem by which all other flea poems are measured. Donne’s absurdly original poem is a lustful suitor’s argument to his virginal partner for why she should give it up–all centering on one tiny flea and its engorged abdomen. At this time sexual intercourse was believed to involve a mingling of the blood, so blood-drawing insects suggested the ritual of intercourse simply by doing their jobs. In the opening stanza Donne’s speaker reasons:

It suck’d me first, and now sucks thee,
And in this flea, our two bloods mingled be

Keep in mind here that the printed “S” at this time looked more like an “F”–allowing the poet to play a bit and still claim total innocence. The speaker in the poem goes on to argue that because the insect has drawn blood from both, they are as good as married: “This flea is you and I, and this / Our marriage bed, and marriage temple is.” Because the flea has mingled their blood by biting them both, the “small thing” the woman continually denies him is technically already lost–and if her virginity is already lost, why not enjoy each other’s bodies to the fullest again, right now? It’s a metaphysical conceit typical of Donne’s brilliance–a parasite associated with lust becomes a holy temple, worthy of exaltation as a vehicle to honest spiritual and sexual union.

Much has been written on the Donne poem, but it exists within a long European tradition of insects swarming the necks and bosoms and underskirts of ladies, exciting the male observer who can only dream of going to such locations on the body of his oh-so-refined lady. A popular flea poem to precede Donne’s was “Carmen de pulcis,” erroneously attributed to Ovid for years, inciting a character in Marlowe’s Doctor Faustus to claim “I am like to Ovid’s flea, I can creep into every corner of a wench.” And while the poem was not actually the work of Ovid, the poems it helped inspire are certainly Ovidian, considering the transformations continually taking place within them. Donne’s flea acts as a cauldron for the two lovers, combining their bloods to become something larger, literally and figuratively, than its miniscule size–a marriage bed, a temple, and more.

In Robert Hooke’s 1665 work Micrographia: Or, Some Physiological Descriptions of Minute Bodies Made by Magnifying Glasses with Observations and Inquiries Thereupon, we meet the flea close up for the first time (along with many other things as they appeared through his microscope).
Hooke’s description of the flea is as remarkable as his illustration–he explores the creature with such delicate attention that it reads more like a love letter to the parasite:

[A]s for the beauty of it, the Microscope manifests [the flea] to be all over adorn’d with a curiously polish’d suit of sable Armour, neatly jointed, and beset with multitudes of sharp pinns, shap’d almost like Porcupine Quills, or bright conical Steel-bodkins; the head is on either side beautify’d with a quick and round black eye, behind each of which also appears a small cavity, in which he seems to move to and fro a certain thin film beset with many small transparent hairs, which probably may be his ears; in the forepart of his head, between the two fore-leggs, he has two small long jointed feelers, or rather smellers, which have four joints, and are hairy, like those of several other creatures; between these, it has a small proboscis, or probe, that seems to consist of a tube and a tongue or sucker, which I have perceived him to slip in and out.

Hooke’s entry on the flea is its own poem, with a respect for his subject more typical of fine arts than science. His use of the phrase “probably may be” shows a lack of scientific arrogance that is as startling as Donne’s sexual playfulness. And while the flea trend was going strong in Europe, little, that I know of, has been written about the fleas that inhabited the beds of young Chinese lovers long before Donne’s poem appeared. There may not even be a discernible trend for that matter–but my favorite flea poem is collected in Cecilia Liang’s brilliant, out-of-print Chinese Folk Poetry, in which Liang translated poems from folklore collections that include poems as early as 12th century B.C.:

Suchow mattress has nine springs.
Quilt and canopy
cover the mandarin ducks.
The embroidered quilt
wraps him and me.
The flea biting him
bites me, too.

This is a poem of proximity, highlighting how close the lovers’ bodies are beneath the quilt–unlike Donne’s poem, they don’t need the flea to join them. But still–the flea appears in the bed of the lovers–and then bites. The fleabite on human flesh often appears as two small puncture marks side by side, causing me to wonder if the vampire and the flea are distant erotic relatives, emblematically speaking.
Finally, I recently came across a Mexican folk art tradition of what are called “dressed fleas” (pulgas vestidas), and while those pictured below are costumed in traditional garb, more typical examples are dressed as bride and groom and given as a wedding gift, continuing the newlywed/flea connection.
The flea, in a million places at once, has been a detested, curious, and erotically charged creature for centuries. Explanations for how the flea came to be associated with sexuality and virginity remain appropriately mysterious, with anecdotes and scholarship abounding, but the fact that fleas often make their homes in beds isn’t a bad starting point. The loss of blood that commonly accompanies the loss of virginity makes the flea’s bloodsucking strangely relevant as well. If I had known in ninth grade that the fleas on my coat were erotic emblems capable of traversing cultures and time in a single jump, I may have thought twice before frantically brushing them off my velvet sleeve.
This is Bridget’s seventh post for Get Behind the Plough.
Images from: http://www.roberthooke.org.uk/micro1.htm and http://www.nhm.ac.uk/resources-rx/images/mexican-flees_13384_1.jpg