Home
»
Critical Essays
»
Flora and the Passage of Time 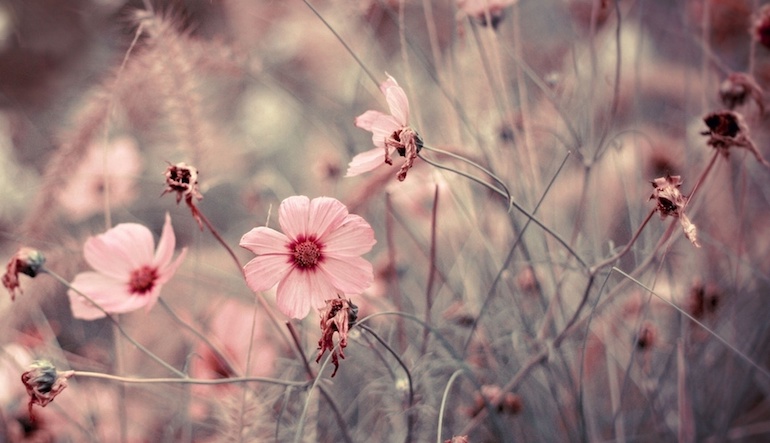 Floral imagery in writings about the passage of time is nothing new: from Lewis Carroll’s Alice’s Adventures in Wonderland to Chimamanda Ngozi Adichie’s Purple Hibiscus, the temporality and fragility of flowers provide extensive ground for cultivating figurative meanings. What keeps flowers from wilting into the ranks of dead metaphors? In other words, why aren’t flowers considered a forbidden cliché by now? It’s been over two hundred years since Robert Burns wrote the famous line “my love is like a red, red rose,” yet writers continue to reinvigorate this trope, finding new layers of meaning to explore.

In the normative canon, perhaps the most obvious poet to invoke during a discussion of flowers and time is Emily Dickinson. Within the complex treatment of time and mortality in her work, flowers repeatedly return as one of her most prominent images. In the poem “I dreaded that first Robin, so,” the yellow tulips enter as part of the unrelenting march of spring that causes the speaker’s dread; those “unthinking Drums” beat the tempo of the passage of time over which she holds no agency. Along similar lines, consider the final stanza of “Bloom — is Result — to meet a Flower”:

Great Nature not to disappoint

Awaiting Her that Day —

To be a Flower, is profound

In this imagining of “Responsibility,” flowers become accountable for the rhythm of nature itself, a rhythm neatly replicated in the even iambs of the stanza. But what happens when the passage of time is not so cleanly defined? What if an emotional arc can disturb even nature’s “unthinking Drums”?

One recent example of innovation within the conceit of flowers and the passage of time can be found in Rowan Beaird’s short story “Perennial.” In the piece, a man is grieving the mysterious disappearance of his wife. After having planted tulips in her memory, he begins to notice that they are being stolen: “Three more flowers are missing […] He leaves their remnants and walks over to the planner he has left open on the lawn table, noting the missing flowers with pencil marks. There is rainwater in her ashtray, a dead bee at its center.” Grief has disrupted the natural passage of time and progression of memory; the dead bee in “her” ashtray (the missing wife’s, though the reader is not clued into her disappearance until later) invokes a sense of nature having been unnaturally halted, or of time’s linear progression having been twisted into something else.

Just before the revelation of the missing tulips, in a similar vein of nonlinearity, the narrative drifts backwards to recall a strange moment in the man’s history classroom:

Last year, he had a student who brought a rose encased in cellophane into his classroom, and she spent the next thirty-five minutes slowly plucking away each layer. She was seated near the back, and he found himself barely able to discuss whatever battle or presidency he was meant to be teaching, so absorbed was he in the flower’s slow disassembling.

In this passage, the flower’s disruptive qualities are so strong that it has the power to interrupt history itself, bringing the narratives of whole nations grinding to a halt. History and flowers also have a way of interrupting each other within the form of “Perennial” as a whole: several italicized sections about the cultural origins and economics of tulips are spliced into the main narrative, grafts from a different genre. The italicized histories and legends from the “real world” interrupt the narrative timeline of the world within the story, and within that narrative timeline, the anecdotal tulips of the italicized sections repeatedly interrupt the mystery of the disappearing tulips. Flowers and time are thus locked in a kind of chiastic tension, which Beaird navigates with grace.

It would be a disservice to Emily Dickinson not to return to her work and affirm that she, too, has innovated within this conceit beyond using flowers to illustrate the unceasing tempo of the passage of time. In a lesser-known Dickinson poem, “’Twould ease — a Butterfly —” the final three stanzas read:

But, Blossom, were I,

I would rather be

Than a Bee’s Eternity —

Is enough for me —

Fade I unto Divinity —

Ample as the Eye —

Her least attention raise on me —

Here, the flower’s fragility and the act of “fading” is an asset instead of an inconvenient truth; the speaker would prefer to be the Blossom’s “moment” over “a Bee’s Eternity.” The wordplay between “be” and “Bee” draws attention to the similarly dual nature of the word “blossom”: it is both noun and verb, both the floral object and the act of flowering. Dickinson unravels her meter in the final two stanzas, using three lines for each instead of her characteristically hymnic quatrains. There is a sense that this “moment” of Blossom escapes from temporality in the same way that turning a verb into a noun allows the word to sidestep the category of tense.

Nature continues to serve as a renewable resource for the poets and writers of each generation. Beaird and Dickinson are not only illustrating their own meanings, but also making it clear that there are still many possibilities to be unearthed.