Home
»
Interviews
»
Flowers Around Your Soft Throat: An Interview with Poet Christina Seymour 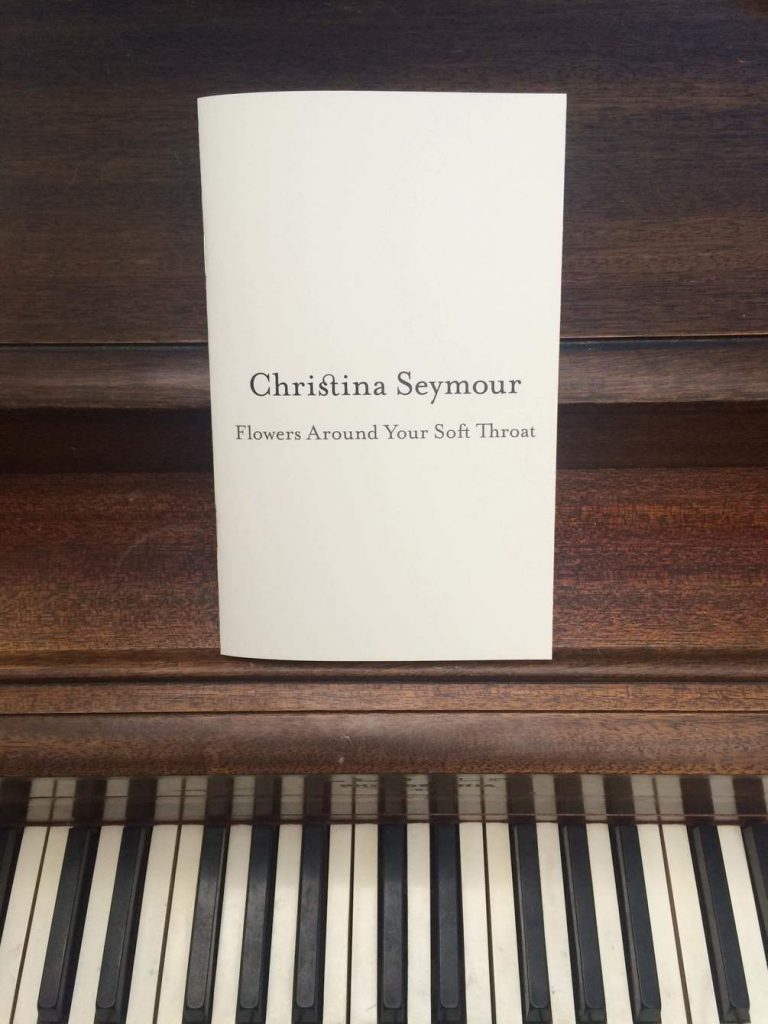 Flowers Around Your Soft Throat

Matthew Landrum of Structo Press describes Flowers Around Your Soft Throat as a collection that “explores death, love, and hope, pacing through death’s shadowy valley and beginning an ascent of the opposite rim. Seymour writes of the frailty of the heart.” I interviewed her about her writing and revision processes over email.

Koh Xin Tian: What was the process of putting your chapbook together and what inspired you to do so?

Christina Seymour: In putting any collection of poems together, I try to shut off that part of the brain that wants to make a story and instead follow my intuition about which poems belong together.

Metaphors for the poem and manuscript help in this process: which “brushstrokes,” in what order, create the arrangement of navy, lavender, and orange that would compose the painting of this particular collection? Which melodies compose this song?

That way, I focus on the beauty and intricacy of language and the lyrical nature of my work, rather than constructing an artifice.

Outside of striving to capture this beauty and intricacy, this chapbook’s arrangement is inspired by the fragments of Sappho, particularly the epigraph, which is translated by Anne Carson. I find Sappho’s images and expressions to be relevant and striking across millennia, the same way a good painting reaches through time and brings me into the moment, with my own thoughts and feelings.

I like to think that the poems in Flowers Around Your Soft Throat are my own fragments, from a time of specific grief and reawakening.

K: I’ve read many of your short lyric poems but until now, not your prose poems, such as “Sacred,” which is in your chapbook. To me it measures one loss, one sensation, against another gain, starting at a funeral home sprayed with mist by “copulating calendulas,”  and next passing by “the inconsequential wreck on our way to puppy obedience class . . . ” How do you work on the structure and detail of a prose poem?

CS: Brené Brown writes: “Until we can tolerate vulnerability and transform it into gratitude, intense feelings of love will often bring up the fear of loss.”

The griefs of others—beautiful, at a distance.

I feel both sentiments apply to my construction of prose poems. Structurally, with many of my poems, I try to name and accept some ache, wrong, problem, or discomfort and then turn it into, or sometimes step away into, appreciation.

Prose poems feel most like a snapshot to me, like the Hirshfield poem, which says a lot by saying a little, particularly in the way details and realizations are juxtaposed and how, nearly all at once, it seems, we receive such a close image of embers with such a faraway image of the moon or “the scent.”

Prose poetry allows me to play with such juxtaposition at a pace similar to dreams: calendulas beside a car wreck beside puppy obedience class; apricots beside my inability to say sorry beside the mountain; the fly in the corner of the emergency room under the stars during the argument; misty lightning over a walk to the trash after the secret was shared.

I also like prose poems because they rely on the sentence for form as well. Experimentation with punctuation is especially fun because the period, comma, em dash, semicolon, or question mark dictates silence, not, arguably, line or stanza endings. Usually I press on my lines to find weak spots; in the prose poem, I press on the syntax.

K: The speaker in your chapbook’s poems also gauges her distance from sadness versus safety: “Klimt’s assorted forest of beech trees will always be trees, / not like Rothko’s colors, / hearths for each sadness, each pearly moment of need, / I simultaneously run away from and run toward.” What questions do you ask yourself when writing a poem?

CS: I love that you’ve observed this. I think the speaker “gauges her distance from sadness versus safety” because I often do that when I take a walk and/or write (sometimes, I walk and write at the same time). These may be two of my go-to questions: how am I sad today? Where do I find safety?

This “gauging” could also enact my tendency to show progress: ache → appreciation, or in this case, sadness → safety. This reminds me of how most of my summer mornings have gone: fry an egg / I am alone / eat / why isn’t this working? / walk along the ridge by the shallow creek / hot breeze / stark white heron / I am alone / this is lovely.

K: How do you revise your poems?

CS: Mary Ann Samyn once said I was the “best reviser” during a workshop, much to my wonder. I think that what she meant is that I take direction well, see what the poem could be, and rework the language around the poem’s potential. I know that I want the poem to be what it can become, which is not a perfectionistic process (on my best days) but rather one of play and revelation.

Some writers write consciously enough to have lines, form, order, and images come out whole and right. This happens occasionally for me if I am pacing myself. Most often, though, I rethink, listen closely, rewrite, give it time, keep all drafts, listen closely some more, and occasionally go to my “store of unused lines” to find the right fit.

K: Which poem is the oldest and the newest in the book and how did each make it in?

I believe the oldest is the second poem, “We, the Painted,” and the newest is the final poem, “The World Solves Itself.” I think both were breakthrough poems for me. The former was originally two poems, written at the Blue Moose Café on a rainy afternoon spent with another poet. We prompted each other with art, and much of that poem is my reaction to Dante Gabriel Rosetti’s Beloved. This introduces one of the “strands” or questions of my work very clearly to me—who am I in the eyes of another; who am I in my own eyes?

The latter poem is the firmest start to me breaking out of my grief. I found that in the middle of my grieving process, many of my poems ended on a sentiment like “just feeling a little of something has to be good enough” or “I am only slightly part of this world.” There was a stark “before” and “after” to this particular loss.

For me, this poem marks the insertion of myself back into the world, into feeling I deserve to linger on moments of beauty. It gives me permission to be comforted by things I before found comfortable. Looking back on this poem, I am not surprised that the form is a stable, four-legged stanza.

K: What’s next for your work?

CS: I want to say: more of the same and everything new under the sun. I have a manuscript in progress and am taking my time, letting each poem find its truth and then listen to it for a while. If you want something flashy, how about, “worthiness and emerald skies”?