Home
»
Book Reviews
»
For Today I Am a Boy 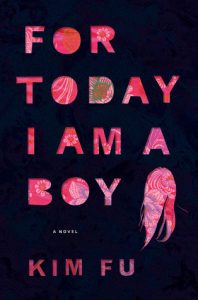 Kim Fu opens her touching debut novel with a birth on the concrete floor of a butcher shop. This story is one that’s been passed down through the Huang family, though it may not be entirely true; “the butcher tells differently” than Mrs. Huang. And it’s appropriate that this contested anecdote opens Fu’s novel, because while the book is largely about gender and self-acceptance, Fu is also interested in how our story is told and how we rewrite our origins.

Fu’s subject is Peter Huang, a second-generation Chinese-American who is the third of four siblings, the man expected to uphold the family name and honor his parents. But Peter knows he’s not meant to be a boy. At first he explores his feelings of femaleness in private:

They were platform sandals, straw-colored with a four-inch wedge and a strap that wrapped around the ankle. Every day, I came home, took off my kitchen shoes and socks, and put on the sandals… And then it was routine, it was the first mouthful after numbing starvation, the one that gives your stomach a voice. Painfully not enough. And I still could not pin down what would be enough, other than resetting time, going back to before my birth, before my conception, and finding a way to choose.

When Peter’s father begins to suspect his son’s feelings, he isolates Peter from his sisters, hoping Peter will be the king he awaited. He chastises Peter for wearing makeup, and notes his approval when Peter reluctantly joins in bullying a female classmate. But Fu does not villainize her characters; she ultimately finds compassion in Peter’s father, who comes to recognize the “weakness” in his birth son even if he stops short of acceptance. He thanks Peter for not shaming him.

As Peter takes steps toward embracing a new identity, Fu surrounds the character with friends and companions who have tapped the gray areas of their own sexuality. Peter’s first restaurant boss, Chef, brags of bedding a woman who turned out to be male. “She was gorgeous. I was wasted,” he explains. Margie, an early lover, dresses Peter in her underwear and lipstick during their bedroom routine. Then there’s Claire, from a Christian ex-gay conversion program, who offers Peter the hope of reformation: “We’d be amicable roommates. It’s more than most people have.”

Where Fu excels are these moments that form Peter’s queer self. She writes Peter’s adolescence as a collage of short vignettes, skipping around chronologically. These episodes are emotionally sparse, mirroring a careful and private journey toward self-acceptance. I always knew where Peter was going, but I admired how Fu captures something personal in every brief encounter.

Josh Garstka earned his MA in Publishing and Writing from Emerson College. By day, he works in copyright and licensing for Pearson Education. He also blogs about the movies and hosts a yearly Oscars party you're definitely invited to. Find him at @GottaGetACritic.