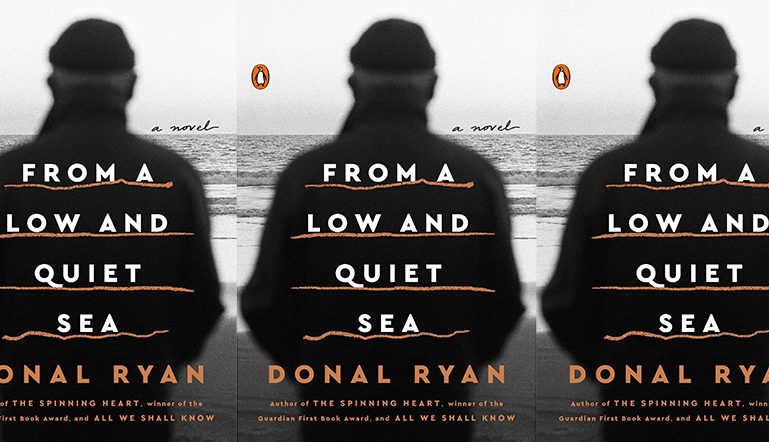 From a Low and Quiet Sea, Donal Ryan’s fourth novel, is intricately designed to tell the interlocking stories of three men: Farouk, a medical doctor and refugee from Syria; Lampy, a twenty-something nursing home bus driver from Ireland; and John, an older Irish man who’s lived a life he now regrets. The whole novel clocks in at just under two hundred pages, and for most writers, telling the story of multiple characters in such a small space would be a challenge. But this book contains worlds. Each of the men star in what are, essentially, fifty-page short stories. And while each one of these stories feels complete, the fact that they are gathered together, bumping up against one another, means that the reader is always searching for those connections, the echoes and strands that insist the stories be told as one.

Within each of the larger sections, short chapters move each story along at a fast pace. The short chapters and page count, combined with the interlocking stories, insist that the novel be read quickly. For some, that could interfere with truly appreciating this book because the desire to understand the narrative and how it all fits together may mean that the novel is read more for plot than for the beauty of its words and ideas. And that would be a shame, because the language and the underlying meaning here are the novel’s great strengths.

The language changes from section to section, from narrator to narrator, as it reflects each of the three men and, at the end, other narrators who appear. But it is all gorgeous prose, sentences that go on in an often Joycean fashion, association upon association, providing deep insight into each character. Farouk’s section comes first, and he begins by directly addressing his daughter as he says goodnight to her at bedtime, the night before Farouk, his wife, and his daughter are to flee Syria. Ryan sets up conflicts that will be echoed throughout the book in the first two pages: between man and nature, between child and adult, between man and man. We have such a strong sense of Farouk as the narration allows us deep into his interiority, letting us see his character through the way he views the world:

And the memory stung him again, so sharply this time that he almost sighed aloud, of how he’d hoped and prayed to God that she’d be born a boy. The moon was visible in the skylight above the landing and the stairs were drenched in its sickly light, and he felt a sudden hatred for it, the dead thing that circled one-faced and tide-locked above the earth, feeling nothing.

Without giving the plot away, suffice it to say that Farouk’s section is the most heartbreaking and lyrical of the three. The themes introduced in the first few pages return again and again, as Farouk faces one conflict after the next.

Lampy’s story comes next, along with its lighter tone, and yet, Lampy also has demons, a darkness running through him. We sense Ryan’s familiarity, perhaps, with people just like Lampy: men who are stuck in a place, men who rarely get the girl, men who can’t quite get out. How nicely Ryan juxtaposes this with Farouk’s story, but never, thankfully, feeling the need to explain. The reader is allowed the space to make the connections, to understand and interpret the through lines.

Lampy lives in the house where he grew up, and it is his relationship with his grandfather that largely structures his story. We learn of his childhood and how he was brought up by his mother and grandfather and of the moment when he understood that his upbringing was different from others:

Mam was Mam and Pop was Pop. Husband and wife and mother and father and grandfather and son and daughter and grandson were all just words, and the only words ever made flesh were Mam and Pop. Then someone told him the meaning of the word bastard.

Again, the Joycean influence is clear here as it’s almost impossible to read some of these lines without hearing bits of A Portrait of the Artist as a Young Man, in particular, throughout. But as with the way that Ryan sets up quiet echoes within the three storylines, so, too, he sets up the comparison with Joyce. It is an homage, to be sure, and it’s fascinating to consider and compare Ryan’s Ireland of today with Joyce’s Ireland of a century ago.

The third section is told in the first person, and that is an appropriate shift, as John is giving a confession. The weakest, perhaps, of the three sections, but that is partially due to the self-serving nature of a confessional. It is not as easy to get caught up in and connected to a man who is admitting his past crimes. That said, there is great underlying mystery in this section as we try to understand where John is and why he is giving his confession.

This is, most certainly, a book about men: women live mostly off the page and in the shadows. Lampy thinks of his mother: “It sometimes seemed to him that his mother lived in a world of ghosts and angels: they swirled and flocked about her all the time.” The men care about women. They think about women. They love their mothers and wives and daughters and girlfriends and ex-girlfriends, but, at its core, this is a novel about men and how they exist in the world. And yet, it takes two women—Lampy’s mother and an elderly, somewhat confused resident in the nursing home—along with Lampy’s grandfather to piece together the links which finally turn these disparate stories into a whole.

These three characters from Lampy’s story each get their say in the final pages of the book, following the three main narratives, and it is in those accounts of the story that the three strands are braided together. There is genuine surprise here, when we learn of the connections, and yet, it is all satisfyingly inevitable, bits of the story we may have skipped over, not quite guessing their importance. And while it may feel a bit contrived toward the end, the overall effect works. This is a book that comes alive even more when it’s reread, when the connections are known. Our separate lives, Ryan seems to be saying, are linked in ways we so often don’t recognize. It’s worth our time to look for those commonalities, those echoes, those ways in which we’re all connected.

Tags:Donal Ryan, From a Low and Quiet Sea