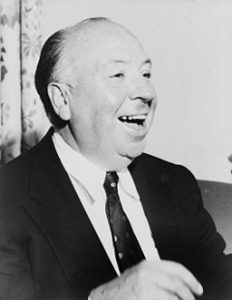 Alfred Hitchcock says, “Drama is life with the dull bits cut out.”  That is absolutely true for the stories that are being passed on to editors. It is your job to tell the story but get rid of the boring bits. A reader wants to travel seamlessly from scene to narrative bridge and back again.

But how? Here are the simplest techniques.

Just do it. Skip ahead in time over the course of a few paragraphs.  Take for example, Flannery O’Connor’s,  “Parker’s Back:”

Not long after that she agreed to take a ride in his truck. Parker parked it on a deserted road and suggested to her that they lie down together in the back of it.

“Not until after we’re married,” she said just like that.

“Oh that ain’t necessary,” Parker said and he reached for her, she thrust him away with such force that the door to the truck came off and he found himself flat on his back on the ground.  He made up his mind then and there to have nothing further to do with her.

They were married in the County Ordinary’s Office because Sarah Ruth thought churches were idolatrous.

Metaphor. Use metaphor to suggest the passage of time, as in Toni Morrison‘s The Bluest Eye:

And the year folded up like a pocket of handkerchiefs.

Focus on a different change. e.g. Kazuo Ishiguro, Remains of the Day

Lisa had been with us for some eight or nine months—and I had largely forgotten her existence at this point—when she vanished from the house together with the second footman.

Despite the old adage show don’t tell, narrative summary is also an essential tool for delivering necessary information efficiently. It is also essential for pacing.  Don’t be afraid to give the reader a back-story. Take a look at Raymond Carver’s story, “Cathedral.”  The opening sentence tells us, “This blind man, an old friend of my wife’s, he was on his way to spend the night.”  The next six paragraphs are back-story, vital to the success of the story.

In “Sonny’s Blues,” James Baldwin has six time shifts in a span of nine sentences.  There is no right or wrong way to cover time.  But remember white space alone does not create a transition. Without the use of language it can be jarring and takes the reader out of the story.  Look at Alice Munro for exceptional use of white space and how she handles time. Her stories feel novelistic.

One thing, I generally find boring is transportation.  I don’t need to know about the car, train or bus for the most part.  How your characters get from dinner to Lover’s Leap is of little interest. What I care about is who is going over the edge at Lover’s Leap.  So, unless the mode of transportation is crucial to the story get rid of it. Think of it in cinematic terms—rarely do we see characters get from point A to B, because who cares how they got there?

John Gardner in “What Writers Do,” says:

A true work of fiction does all of the following things, and does them elegantly, efficiently: it creates a vivid and continuous dream in a readers mind; it is implicitly philosophical; it fulfills or at least deals with all of the expectations it sets up; and it strikes us, in the end, not simply as a thing done but as a shining performance.

Want out of the slush pile? Get rid of the dull bits.