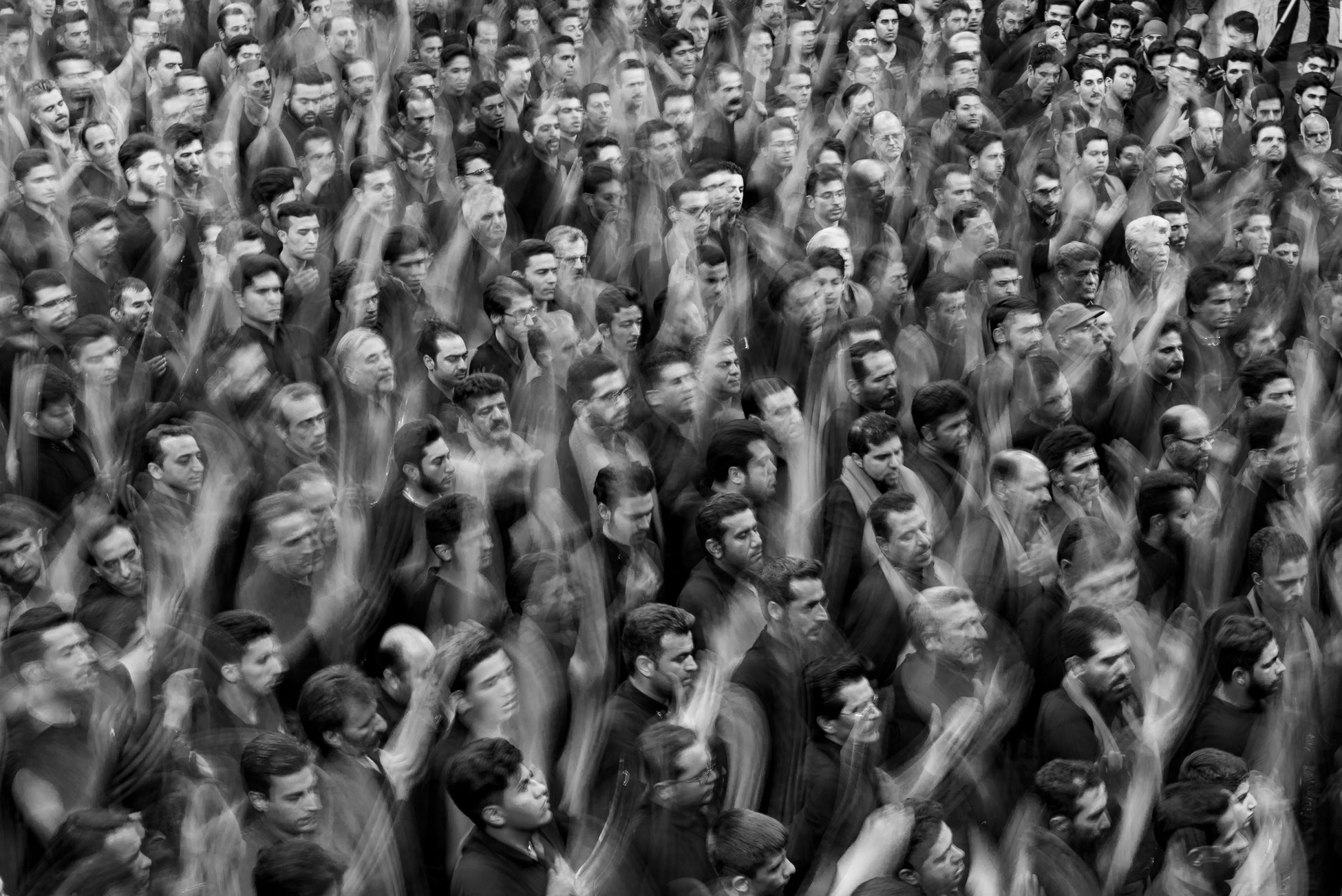 Two winters ago, brand-new to the creative writing community of Madison, Wisconsin, I was at ground zero of the national debate on union rights, caught in a throng of 70,000 protestors marching around the State Capitol, screaming “Whose Streets? Our Streets!,” “This Is What Democracy Looks Like!,” and “It’s Not About The Money, It’s About The Rights!” while a choir of scarved-and-mittened “radical grannies” belted “We Shall Overcome” through a PA system on the Capitol lawn, and the Reverend Jesse Jackson milled about, waiting for his time on the microphone.

It was inspiring. And, also, profoundly uncomfortable… suddenly my colleagues and students— poets and fiction-writers who rallied against clichés and didacticism almost every week in workshop—were hollering tired slogans in group-think monotone. I cared about the cause, but the whole scene made me feel anxious, out-of-place and all-wrong; I daydreamed about showing up to the march with a sign reading, “This Is What Reductive-But-Well-Intentioned Mob Mentality Looks Like.” As is often necessary in politics, my colleagues and I had tacitly agreed to put aside our writerly impulses, to use the clichés and preachy aphorisms that in any other circumstance we’d shun, for the good of the cause. The end seemed to justify the means.

But was it really necessary to feel so torn? What needs to change more, or what can we expect to change: cliché-ridden, sound-bite politics, or the criteria by which we judge quality in politically-focused writing? This might sound like a rhetorical question (“it’s politics that need to change, obviously”), but I don’t mean it to be.

In my last post I talked about what happens when standard measures of literary quality bump their incompatible uglies with creative works of political or social intent. In particular, I suggested that some aesthetics defined by associative leaps and linguistic/imagistic ambiguity are by nature less effective than more traditional forms of lyricism or narrative when it comes to rallying readers/listeners toward social action. I also argued that, when evaluating poetry of social conscience, editors need to second-guess their gut reactions against clichés, since originality or literary greatness just aren’t the main intentions of much socially ambitious writing, and so should not be the main criteria for judgment.

Here I’d like to extend this discussion to a few other seldom-protested standards of good writing: the adage “show, don’t tell” and the notion that didacticism, sensationalism, and preachiness should be avoided whenever possible.

If you’ve ever taught creative writing, then you’ve probably written “show, don’t tell” on the chalkboard at some point, and you’ve probably also been harassed by some smart-ass sophomore who points out that the adage itself is nonsense, since writing is made of words… “showing” is only made possible by “telling.”

True enough, smart-ass sophomore. But what we mean by “show, don’t tell” is that it’s better to infer thoughts, ideas, and emotions through images and narrative—or what T. S. Eliot called an “objective correlative”—than to state those thoughts or ideas outright. By following this rule, we are able to represent “sadness,” “anger,” etc. closer to the way we actually experience it, rather than as a dried up signifier or symbol: the word “sadness” or “anger” itself. And so on one level, “show, don’t tell” is of the utmost importance to creative writing with political objectives: it’s how we evoke a common, collective feeling, which is essential to creating solidarity.

On the other hand, there are many ideas (especially in politics) that are just too nuanced and too complicated to be expressed through the murkiness of imagism or the objective correlative. How does one “show” rather than “tell” the complicated system of mis-steps that led to the 2007 market crash, for instance? Do such arguments or details simply not belong in creative writing?

As editors and teachers, of course, we do make frequent exceptions to the rule. If Rilke were to walk into our classroom with his first draft of “Archaic Torso of Apollo,” or slip it over the transom at Poetry magazine, I don’t think anyone would throw it out because it “tells” rather than “shows” in its final sentence: “You must change your life.” Rather, that line is what makes the poem. Few would argue otherwise.

And yet, as an editor, I have repeatedly seen my peers pan discursive, argumentative poems and stories for “telling” too much, for going more than a couple lines without a burning, resonant image, when it seems to me that this is not a failure of the writer or the work in question, but rather a failure of our own editorial criteria and the limitations of imagery or narrative as devices for representation. Some subjects, especially critiques of government or other political systems, require arguments, require words, require telling more than showing. Just as we change our criteria for judgment when we are reading objectivist poetry versus a traditional, capital-R Romantic sonnet or what-have-you—just as we would use different language and different measures to evaluate Franz Kafka and Flannery O’Connor—so too do we need to change our tools when we encounter a poem or story with immediate political or social goals: “show, don’t tell” can’t and shouldn’t be a fits-all measuring stick.

The objection to telling instead of showing extends into the gut-reaction most of us share, as writers, editors, and teachers, to didacticism, sensationalism, and sentimentality. Very little makes me cringe more than to feel that a writer is attempting to manipulate me emotionally as a reader, or preach to me, or accost me with blaring, over-the-top violent, sexual, or otherwise offensive imagery. As readers of literary fiction and poetry, it seems what we want is to stand apart from a work of writing and consider its merits or arguments from a safe distance. We want to be able to encounter it in much the same way we encounter an image or metaphor within a poem or story, as something we can evaluate on our own terms, something we would feel comfortable walking away from… we don’t want to get involved with ideas or images that are too clingy.

What didacticism, sensationalism, and sentimentality all have in common is they break that safe space, that fourth wall between the writer and reader. They demand something of us, whether it’s to pick a side (didacticism), answer for or respond to bear witness to the cruelties of the world (sensationalism), or empathize with the writer, whom we do not know and in whom we have very little stake (sentimentality). And so, if a poem’s intentions are to rile up an audience, to incite rebellion or political action, then didacticism, sensationalism, and sentimentality are all extremely useful and effective; they actively engage the reader.

Just as concerning is how unquestioningly we throw these terms around. When we say “didactic,” we usually just mean “it’s discursive” plus “I don’t like it” or “—don’t agree with it,” or “—don’t like the tone it takes with ‘the reader,’ by which I mean me.” Dismissing a piece of writing for being didactic (which, again, I’ve witnessed countless times in workshops and editorial meetings) is therefore yet another way to make a political decision about piece of writing under the guise of semi-objective literary judgment.

The same is true of sentimentalism. Some of the best-loved, for-the-most-part non-political poetry collections of the past quarter century—Marie Howe’s What the Living Do, for example, or Nick Flynn’s Some Ether—are deeply, deeply emotional texts that strive to invoke, in the reader, a sense of empathy and shared suffering. Sentimentality is key to these texts, it’s part of what makes them work, except that when sentimentality works for us individually we don’t call it sentimentality, we say “emotional resonance” or something like that. To dismiss a poem as too “sentimental” is therefore to make a straw-man argument; it’s a falsely qualitative way of saying “I don’t like it,” and this is yet another way that politically ambitious works of literature get rejected, by appealing to our sense of pathos, which gives an editor a handy, one-word reason for throwing it out: sentimentality.

But the most problematic of these three labels, to my mind, is sensationalism. Many of the subjects that most deserve literary attention, and beg for social or political action, are by nature sensational: genocide, rape, hate-crime, torture. When we approach these subjects, as writers, we are expected to do so with a sense of distance or decorum—we must imply, rather than address directly, the horror that is our real subject. And this is profoundly limiting. It may show a lack of tact or nuance, not to mention a lack of care for the individual reader, to put the world’s cruelties in front of his or her face, but to avoid doing so seems so much worse, seems like a lack of care on a much grander, human level… seems almost immoral.

V) Where We Go from Here

In my arguments here, I have been interested in a particular kind of political text, and specifically a particular kind of poem that takes a populist and argumentative stance, has immediate real-world goals, and strives first and foremost to take hold in the larger social (rather than the immediate literary) environment. There are obviously any number of ways for a poem or story to be “political” or otherwise socially effective, whether through a deconstruction of the controlling forces of language and/or narrative itself (Joyce, Zukofsky, Stein, Hejinian, Silliman), through a literature “of witness” (Garcia-Marquez, Carolyn Forché, Ai), more literarily accepted forms of discursion (Rukeyser, Campbell McGrath, Pinsky, the late great Adrienne Rich), personal narrative (Gwendolyn Brooks, Mark Doty, Allen Ginsberg), etc.. I don’t mean to discount these forms of politically motivated creative writing—I just haven’t addressed them much because I don’t believe they are at risk or under threat.

But we seem to have lost the populist, political poem in America, and this makes me sad, as well as suspicious of how American criteria of editorship might be part of the problem. Certainly there is a history of the populist, socially ambitious poem in the United States, most notably in Langston Hughes (see especially The Panther and the Lash). But poetry is able to serve a much more immediate social function in much of the rest of the world—in Central and South America, in the Middle East, in East and Central Europe, even just across the pond, in the less-anthologized political poems of Yeats.

By being a little more critical of our means of criticism, we as editors might be able to help American poetry serve a more vital and widespread social function again. This would not mean opening up the floodgates to all manner of doggerel and propaganda—I wouldn’t want that. Rather, it would mean making the same allowances for political poems that we make for surrealist texts, haiku, magical realism, or any number of other genres or forms—to acknowledge that there are restrictions to and inherent differences in political poems that we must take into consideration in order to evaluate them fairly as readers and editors.

Sean Bishop is a poet, editor, and graphic designer who teaches in the MFA program at the University of Wisconsin-Madison. He is the founding editor of BETTER (bettermagazine.org) and the former managing editor of GULF COAST. His poems have appeared or are forthcoming in ALASKA QUARTERLY REVIEW, BAT CITY REVIEW, BOSTON REVIEW, CRAZYHORSE, JUBILAT, INDIANA REVIEW, PLOUGHSHARES, POETRY, and elsewhere.