Home
»
Uncategorized
»
Get Real! Or Maybe Don’t Get Real? A Conversation with Lincoln Michel (Part 1)

Recently, on social media, Gigantic magazine editor Lincoln Michel questioned the label of “realism.” I write “realism,” and I’m branching into other genres, so I introduced myself and asked a few more questions. Our conversation, conducted over e-mail, spanned several days, topics, and (starting today) will also span two blog entries here at Ploughshares.

Lincoln Michel’s fiction appears in Tin House, Electric Literature, Unstuck, NOON, and elsewhere. He is a co-editor of Gigantic magazine and Gigantic Worlds, a forthcoming anthology of science flash fiction. Sometimes he draws authors as monsters. He tweets at @thelincoln.

In Part 1, we discuss “realism” as a construction, George Saunders, Beloved, Cormac McCarthy, and vacuum pigs.

Rebecca Meacham: Lincoln, you made the following charge against literary realism:

I find the term “realism” to be pretty… problematic. Most stuff labeled realism isn’t really realism, and it’s frustrating that every other kind of writing gets lumped into a few vague categories (magical realism/fantasy, satire, maybe postmodern now and then).

Lincoln Michel: Thanks for inviting me to talk about this! This is a topic that I think a lot about, so I’m afraid you might be opening a can of worms—is a can of worms “realistic”? Can of nightmare dream snakes?

I have a lot of problems with the way “realism” is used in literature and criticism. I tend to think it is an ill-defined term, not a useful way to think of most fiction, and it spawns some of the worst criticism. “It didn’t feel realistic!” is the go-to complaint for everyone from Amazon reviewers to undergrad workshoppers who didn’t bother to understand what a text was trying to do.

I once heard George Saunders talk about how—and I’m paraphrasing—there is nothing really very realistic about the patterns on the drapes being the perfect metaphor for a crumbling marriage. The point, of course, is that realism is a construction just like anything else. Even at the most basic level, fiction is fiction, “nobody speaks in prose,” and even writers truly attempting an imitation of reality are actual presenting a distorted picture of it.

That’s all obvious, but I think the issue is much deeper. Critics and readers tend to lump all fiction into a few broad categories. Most literary fiction—no matter how unrealistic—is labeled “realism.” If it has any overtly weird elements, it gets called “magical realism.” (In a previous decade, much of that might have been labeled “postmodern.”) Otherwise, it is probably labeled Speculative Fiction…. and then a ton of people will argue that all “magical realism” is actually a subset of SF. This leaves us essentially calling all literary fiction “realism.” (In the genre world, critics have a habit of calling all literary fiction “mimetic fiction” or, more pejoratively, “mundane fiction.”)

But my favorite writers tend to exist outside of these reductive definitions. I’m thinking writers like Kafka, Borges, or Kobo Abe. I believe that literary criticism should acknowledge the diverse and complex spectrum of “worlds” presented by fiction.

RM: So for you, what is “really realism”? And what is not?

LM: An attempt to accurately portray reality as most people understand it, maybe? But how much of literary fiction is truly trying to do that? In my initial Facebook post, I made some jokes about how realist writers overestimate the number of “epiphanies” that occur in “reality.” The point is that in any genre we allow a lot of unrealistic elements to occur as part of the conventions of the genre.

But it isn’t just that writers necessarily present a distorted slice of reality and fill their texts with language, coincidences, and actions that are—at the very least—unlikely to occur. I just googled the term “dirty realism” and saw that the initial Granta issue that spawned the term included Cormac McCarthy! I would never think of the author Blood Meridian as a realist. Surely McCarthy knows that people don’t talk like his characters talk. We could move across the spectrum here, showing writers that make their worlds more and more unrealistic (O’Connor, Pynchon, Marquez, Bender, Calvino, Stein, etc.) until we end up with pure surrealism. The point, though, is that there is a huge spectrum, and a million ways to tweak and twist reality.

I might also point out here that one could easily make the argument that a fantasy writer who tries to create a detailed and fully realized world—e.g., George R. R. Martin—has a project that is closer to what a classic realist like Flaubert was trying to accomplish than, say, Flannery O’Connor.  Similarly, a hard science fiction writer who seriously explores the ramifications of a new technology is arguably more similar to Raymond Carver, in terms of presenting a realistic reality, than either is to Franz Kafka. 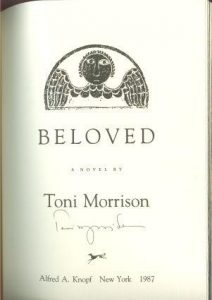 Because I’m thinking about Toni Morrison’s Beloved, which I’m teaching for the 6th time. I feel like Morrison presents an achingly “real” depiction of slavery in American literature—what makes it seem like “realism” is Morrison’s desire to write free of “the little white gaze,” and to explore in fiction the interiority of consciousnesses shattered by whips and bits, as well as her fidelity to the violent, terrifying, and petty details of American history. Plus, the subject matter is factual and grave and weighty.

But then there’s that ghost. The one in the title and everything.

LM: I think Beloved is a great example for the reasons you say. It’s normally, I believe, classified as “magical realism.” But much of it is, as you say, highly realistic. So magical realism is how it is classified, but is that really a useful classification? Does it help our reading of the novel? Is Morrison’s project really the same as Marquez’s?

This is slightly off-topic, but I was recently reading Marquez’s Wikipedia page and thought this sentence was hilarious: “Reality is an important theme in all of García Márquez’s works.”

RM: That is hilarious!

I also wonder, how do writers like Brock Clarke, George Saunders, Judy Budnitz, Aimee Bender, Dan Chaon, or Kelly Link get classified? Does this classification help or hinder sales, or change anything about the ways they connect with audiences?

For me, the problems of classification become particularly difficult when I write letters of recommendation for students for MFA admissions committees. For example, a student who writes a story about a character who invents a vaccuum-pig, or who builds a tower of sinks. I struggle to articulate that student’s vision or “fit.”

LM: I think my main frustration is about our culture’s understanding and discussion of fiction. I think that even though those writers can be really popular, people do not think or talk about their work in most enlightening ways. Probably this is due to the way literature is taught in high school and college, and the overwhelming dominance of a small slice of realist writing on those syllabuses. I remember having peers in workshop who couldn’t talk about non-realist work as anything other than satire. If you wrote a story about vacuum-pigs, you’d get comments like, “What is the vacuum-pig satirizing? What does the tower of sinks represent? I don’t get it!”

Regarding the authors you list, I think they get labeled in that handful of broad categories I described above. Saunders is normally labeled a satirist or a postmodernist, Bender is normally labeled a magical realist, Link is often called a fantasy writer, and so on. Right? One interesting thing about all of those authors—and I love them all—is that they truly write different stories in different styles and genres.

Some Saunders stories are basically realist, others could be called science fiction, others are postmodern, and many are some combination of those things and more. Link’s collections cover a wide variety of ground too. Another favorite of mine is Barry Hannah. If you read his collection Airships, many of the stories might be a form of domestic realism, others are absurdist war stories, and still others contain elements of science fiction or surrealism.

We love to pigeon-hole writers, even ones who like to rest in different holes. Certainly many great writers do simply till one patch of ground. (Sorry to mix metaphors.) But often my favorite writers plant lots of crops in different fields. I really love collections—like Airships—that cover a lot of ground and yet still feel cohesive thanks to the strength of the author’s voice and vision. Yet critics and readers tend to have a really hard time with books like that.

For more of my conversation with Lincoln Michel about “realism” in writing workshops and shifts in the literary market, tune in for Part 2, this Saturday!