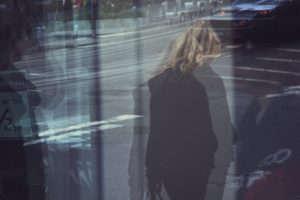 For a long time, Rebecca Solnit’s 2005 A Field Guide to Getting Lost

sat on my nightstand. Prior to reading her collection of essays, I had assumed it was about getting lost in the physical sense, for the sake of exploring and enjoying the natural world. It is not that. While much of Solnit’s reflections take place out of doors, the book’s focus is on getting lost in the emotional sense.

Solnit’s previous work, in Harper’s and elsewhere, always caused me to think freshly about something I thought I knew. This book goes even further: while reading it, I began to reflect on how hard it is to get lost (in any sense of the word) in 2017. But as Solnit discloses in one deeply personal passage after another, getting lost is a necessary pursuit if we wish to gain some kind of insight into ourselves and the people we’ve known.

Getting lost is a given for Solnit. “The question then is how to get lost,” she says. “Never to get lost is not to live, not to know how to get lost brings you to destruction, and somewhere in the terra incognito in between lies a life of discovery.” She’s chosen a life of getting lost and by reading her work, we have chosen to get lost with her—though in each of these journeys we are still alone. Roughly halfway through the collection she reminds us, “Reading and writing are largely private and solitary experiences.”

Writing requires substantial solitude, which often comes paired with adventure that leads the writer away from the familiar. It’s understood that taking leave of the modern world is a requirement to research the explorers and mapmakers from the sixteenth and seventeenth centuries, as Solnit does. I imagine her getting lost in thought as well. If one wishes to read or write, one must be willing to lose oneself in the story, intentionally stepping away from our ever-connected culture.

Sure, going for a walk can promote introspection. So can meditation. But the right book is like a conversation with a friend who knows just what to say and when. We bring ourselves into every book we read. The words act like a strong wind that reshapes our thoughts and maybe our actions. And then those words hold up a mirror, so we can see how we’ve changed. That’s powerful stuff. We read because we want to be moved to think and do things differently and understand why.

The core of A Field Guide to Getting Lost are personal memories that demonstrate the practice of getting lost in one’s mind. The first and last chapters begin in her childhood home, a place she’d access in memory even after she moved away: “I had been wandering through that house every now and again ever since I’d left it at age fourteen. A quarter century had passed, and I still wasn’t out of it, in my dreams,” she writes.

Solnit also focuses on memories of other people and places—ones that may have seemed tangential at the same time, but have become markers in a map of memory wandering.

Most notably is Marine, “a delicate tomboy,” a singer and addict who Solnit befriended and adored in early adulthood but who was just out of reach. We’ve all known someone like her, who was just past our fingertips. There is a filmmaker friend with whom Solnit shot a movie in an abandoned hospital. They drifted apart. And there is an ancestor, who Solnit imagines arriving on Ellis Island. Solnit had lost these people, but in writing about them, she found them again.

In another writer’s hands these memories could feel like run-of-the-mill nostalgia. Solnit doesn’t recall who she’s lost with regret so much as curiosity. But this isn’t simply an intellectual exercise; she’s rediscovering these people all over again. Just as important, she is trying to understand how the relationships she’s had have molded the person she is now. To accomplish these things, she had to create the emotional space and A Field Guide to Getting Lost is the result of that work.

Reading this book, one can’t help but do the same. Solnit shows us how important it is to get lost in the physical and psychic sense. Technological connectivity is pervasive, offering an endless stream of information, but little by way of insight. Getting away from the noise is not to choose ignorance, but to examine oneself in the Thoreauvian tradition.