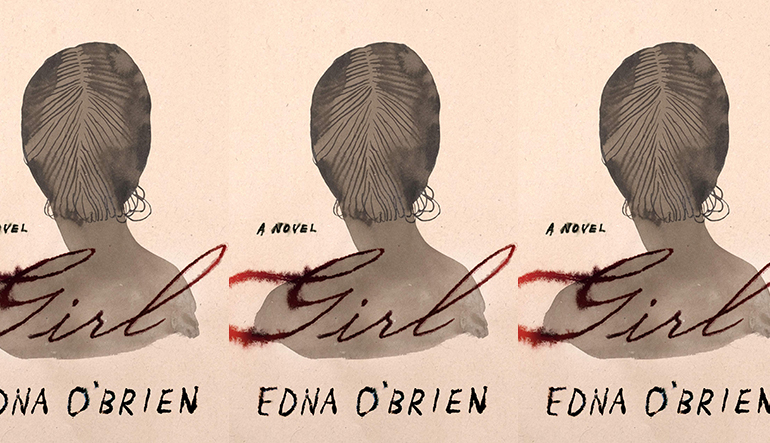 At the precipitously ripe age of eighty-eight, Edna O’Brien, the grand dame of Irish belles lettres, has set herself the task of a tricky imagining. It seems almost a miracle that her prose, brimming with mellifluous, spitfire vitality, is unmarred by the indignities of time, which tend to clog up the finest rolling style with querulous commas and lazy transitions, the prosodic equivalent of shoving a stick into someone’s bike tire. Call it what you will—divine afflatus, bred-in-the-bone talent, nearly nine decades’ worth of practice. I prefer to picture O’Brien hunched druidically over whatever moss-strewn whetstone she employs for the sharpening of her pen, green-gold sparks jetting off into the night of some inscrutable Samhain.

Girl, O’Brien’s first novel in four years and her fourth since the new millennium, traces the experience of one of the Boko Haram girls, a group of nearly three-hundred young women abducted in 2014 from a government school in Chibok, Nigeria. A story of indoctrination and resistance, Girl is told in a prose so butter-smooth and sprueless it seems to have fallen fully-formed from O’Brien’s pen. The book’s sudden outbursts of stomach-turning violence come like speed bumps in the greater purl, made more jolting and haunting still by the terrible, clear-eyed maturity of the writing. It’s a sort of tight-rope act O’Brien seems to be performing, strung between the stream-like nature of her prose and the painful shards of her story.

Brutality stomps through the pages of Girl, astonishing in its recurrence and terrifying in the variable justifications that underpin it. Arriving at the Boko Haram compound shortly after being abducted, Maryam, the novel’s narrator, witnesses “a young girl staggering across the year” with “a thick wad of lint attached to her bottom lip that was seeping with blood.” Her tongue has been torn out, though it’s not until a few pages later that we learn the cause of this mutilation—having slipped into a trance one day, the girl predicted the deaths of many militia members, and consequently had the offending member removed.

This glimpse of senseless, archaic violence sets the scene for the shocks to come while differing from them in an interesting way. The appeal to older forms of violence, while an indictment in its own right, is also an excuse of sorts, making violence something traditional and intrinsic, a trait that’s been with us since the year dot. In counterpoint, the book’s several scenes of rape are sordidly modern and darkly uncompromising in their legibility. At one point, Maryam is tackled by a man and assaulted while his friends film the incident with their phones; afterwards, they take pictures of her face, “blank, aghast, emptied of life.” Beyond its obvious viscerality, what makes the scene so disturbing is its insistent presentness, the way it occurs unabashedly in our own cellphone-studded reality.

Girl is a punishing, relentless book, a gauntlet of neon-bright horrors, and yet O’Brien’s prose—and by extension Maryam’s voice—is capable of extreme delicacies, of a withy, caressing attention, as when Maryam recalls the prize she’d received for winning an essay contest at her school: a slip of “perfumed paper, lemony in colour” and “decorated with flowers, small sprays of snowdrops in folds of green leaf.” We read, later, of the “wan lingering exclamation” of water dripping onto a clay floor, of the blackened leaves and “cupola of dead roses” that are all that remain of an old flowering shrub, and of how, at night, each tree is left to “its own slumberous empire.” These luminous felicities of phrasing are scattered throughout the text like cool oases in the desert, meant no less for the reader than for Maryam herself, a budding writer who keeps a journal of her captivity.

Eventually, Maryam escapes from the Boko Haram compound with her baby and a fellow captive named Buki, and the book assumes the lineaments of an adventure story. Maryam and Buki move through an almost romantic landscape, where “the earth is an ochre yellow, scored with deep zigzag lines.” O’Brien’s prose, falling on the sere beauty of the Sahara, blossoms like a nightflower. What’s maybe most interesting about these pages is the elemental nature of experience, as when Buki relearns the delicate pageantry of fire-making: “Pinpricks of gold that as she breathed on them, whooshed into life, and were then carried across in her cupped hands to the fire that she had already laid.”

But touches of modernity intrude; contrary to what we might expect, they only signal further hopelessness. When Maryam and Buki spy an object flying over the desert, their hope evaporates almost instantly—it’s no heroic biplane come to rescue them, but a drone, a sterile, unmanned node soaring impartially over the jewelish sands. In this Beckettian-feeling scene, visibility, almost entirely given over to the impersonality of surveillance, is a corrupted value, viewing humans as points of data on the great parchment of the landscape.

Eventually, Maryam returns to her family and is met with coldness—the shadows of the forest still hover over her. Her cousins and neighbors can barely hide their true feelings: “I could feel their hesitation and worse, their contempt. I knew they were thinking, Jihadi wife, with the Sambisa filth still clinging to her.” One of Maryam’s greatest desires throughout the book is to purge herself of the past, to become empty, a flake of ash, but the cleansing rites prescribed by her family offer only repetition. A hired witch woman takes a heated, hooked needle and thrusts it down Maryam’s throat, twisting and tearing until, “weirdly triumphant,” she brings up a “bubble, the size of a small bead and almost luminous.” To be emptied of the memories strung like lead weights along her limbs seems the only form of exit available to Maryam in a cultural milieu obsessed with the stain of her experience.

In such a poetically rich work it’s not surprising that the novel’s end finds Maryam ensconced in a locus amoenus, reunited with her child and prepared, once again, to live. The scorings of existence are already flaking away, and if the possibility of regeneration in these shocking circumstances seems virtually nil, O’Brien’s inferno-like vitality and limpid prose are enough, somehow, to convince us otherwise, casting defiant beauty back out into the world and dangling, at the coda, a little note of grace.