Home
»
Critical Essays
»
Girls in The Lucky Ones 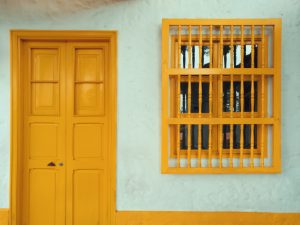 The stories in Julianne Pachico’s debut collection The Lucky Ones are set in and out of Colombia, following the lives of a group of privileged students and their teachers amidst the country’s ongoing conflict. The war is made surreal in Pachico’s stories, which are rife with highs, hallucination, and ghosts. She explores its edges, wandering through the lives of the corrupt upper class who live in gated houses with pools and pet spider monkeys, and dives into the conflict, into the deeps of the jungle where one of the girls’ teachers is being held hostage and a guerilla fighter is haunted by the loss of his boyhood. But The Lucky Ones has a steady eye on its girls. Mariela, La Flaca, Stephanie, Betsy: they appear as girls, and later, for those who make it out alive, as young women. Their girlhood is perverted by the war, which lingers at the peripheries, an ever-present threat ready to change their lives.

In the collection’s opening story, “Lucky,” teenage Stephanie is left alone for a holiday weekend while her family goes to a party in the mountains. To be a girl alone is to always feel the threat of men. It’s on the peripheries: they walk too close, stare too long, offer an unwanted touch. The threat feels far away for Stephanie, whose family wealth insulates her from the conflict, but the reality of the war magnifies its potential violence. Before they leave, her mother warns her against answering the door or the phone. Let the maid, Angelina, do it, she says. “And make sure she tells any men who ask that we’re not in the country anymore. Could you do that for me?” When Stephanie asks, “What kind of men?” her mother replies, “You know what kind I mean.”

But Stephanie is concerned with other kinds of men—the football players who flirt with her at the mall, the knights in the Arthurian fantasy novel she reads. Typically teenage, she’s bursting with a longing for something new, so when the door buzzes, and Angelina is nowhere to be found, she answers it. “Well, here I am,” the strange man, scarred and barefoot, standing at her door says. “Let’s go.” He calls her “princess.” It is the meet-cute made terrifying: girl meets man, man takes her away from home, girl is never seen again. Before that can happen, she closes the door in his face, retreating to the empty house. Trying to drown out the continually ringing doorbell she reads a novelization of Star Wars, plays with her mother’s makeup, and pulls out an old school puzzle, a map of Colombia:

Once the pieces are sorted, though, she never tries to fit them together. Instead she scatters them on the floor—she has to take an enormous step over them every time she heads down the hallway, like a giant who can cross an entire country with a single stride.

She’s a conqueror here, holding a broken country in her hands. But it’s only a puzzle, and she’s still only a girl. The real country, and the man outside will catch up with her soon enough, but what happens after that is unclear. “She won’t just be left here,” Stephanie hopes to herself. “She won’t be forgotten.”

In “Honey Bunny,” taking place years later in New York, one of Stephanie’s childhood friends remembers a folktale her maids would tell her:

Ghosts who would come knocking on your door, ringing on your bell, long dead souls with scarred faces, wandering the country with no name and no past. If you unlocked the door for them, they would wrap their hands around your wrist and lead you away, make you vanish into thin air, disappear without a trace. If you were unlucky, no one would even remember your name: your real one, the one that everyone called you.

Was Stephanie taken by a ghost? I almost hope she was, as the alternative seems worse. But it doesn’t seem that her friend, who is unnamed and only refers to herself by her old childhood nickname of La Flaca, is that lucky for surviving. Usually too burnt out from partying and coke hangovers to go to class, La Flaca is disturbed when her usual routine of nighttime highs and daytime pickups from her dealer, Paco, is interrupted. She finds remnants of her old life in the baggies Paco gives her: insect wings, Communion wafers, dried up flower petals. Their presence becomes a comforting one, pulling her backwards to a girlhood lost when her family fled Colombia for America. Her attempts are stymied. She tries to get Paco to speak to her in Spanish, to call her La Flaca, but he insists on replying in English and calling her by her full name. She searches for her old house on Google Earth, but the image of the map resists her gaze: “No matter how many times she zooms in […] the house remains a blur. All she can see are the fuzzy smears of the mango trees on the other side of the wall and the light glinting off the jagged glass.” It’s been years, anyway. The house, the language, the country—it’s lost, and what’s left is just reflection.

Later, like Stephanie, she tries to put together the map herself, uncovering her own copy of the puzzle map of Colombia from school. This is unsuccessful, too. The map is missing a piece, a central department whose absence looks like “an open wound.” While Stephanie stepped over the pieces on her way out the door to the rest of her life, La Flaca holds the puzzle pieces close, cradling them like children, “smelling their sweet familiar scent, as recognizable as moth balls.” She’s a girl again, playing with toys, speaking to them in a language only she can truly understand. She croons to “the unfinished country,” starting with English (sweetie pie, honey bunny) then “half-remembered Spanish” (querida, mija), saying everything but her own name.