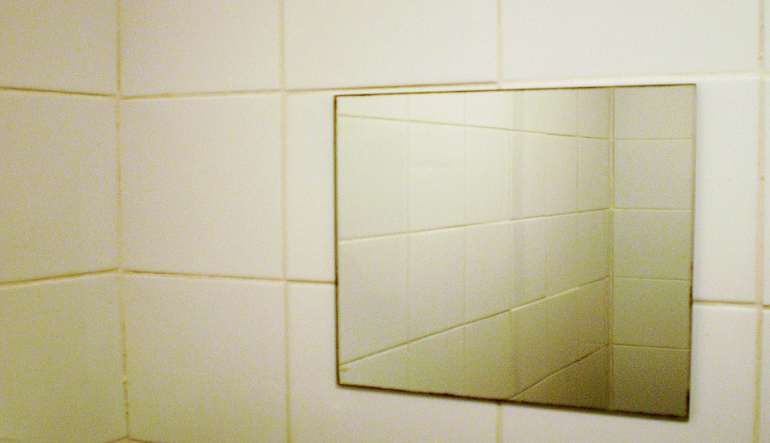 As a teenager, I suffered long bouts of gazing into the mirror. Time fell away and I went into a kind of deliberate stupor. I thought if I stared long enough, I might forget who I was looking at, and—for a moment—see myself as others saw me. I wanted to know if I was pretty. Or ugly. Or, more realistically, where I fell on the great spectrum of in-between.

Many novels contain this recognizable scene, in which girls and young women look in the mirror and assess themselves without mercy. In Conversations With Friends, by Sally Rooney, Frances, the narrator, is 21, a gifted university student in Dublin.

Mirrors are a large presence in the book, and the first one appears in the first chapter, in a flashback to when Frances was sixteen and got together with her first romantic partner, a girl named Bobbi.

When Bobbi talked about me it felt like seeing myself in a mirror for the first time. I also looked in actual mirrors more often. I started taking a close interest in my face and body, which I’d never done before. I asked Bobbi questions like: do I have long legs? Or short?

Frances has been quiet, smart, and almost invisible until the charismatic Bobbi takes an interest. She searches for objective information about herself, using Bobbi and the mirror to find it. The reader learns right away that she uses other people as mirrors—and that she knows this about herself.

At the outset of the novel, she and Bobbi are no longer romantically involved, but they’re still close and perform poetry together. Before a performance, as the story gets underway, Frances looks in the mirror again. Without telling Bobbi, she’s invited Nick, a married, older man she’s interested in.

Even looking in the mirror made me nervous. I didn’t think I looked awful. My face was plain, but I was so extremely thin as to look interesting, and I chose my clothing to emphasise this effect. I wore a lot of dark colors and severe necklines. That night I was wearing a reddish-brown lipstick and in the weird bathroom light I looked sick and faint. Eventually the features of my face seemed to come apart from one another or at least lose their ordinary relationships to each other, like a word you read so many times it makes no sense any more. I wondered if I was having an anxiety attack. Then Bobbi told me to stop staring at myself and I stopped.

Looking in the mirror makes her lose her composure and her ability to see herself, largely because she’s anticipating being seen by Nick onstage. Nick doesn’t make it in time for the performance—only the applause, and afterwards Frances reflects on how this is better than if he’d seen her perform.

[…] the acclaim also felt like part of the performance itself, the best part, and the most pure expression of what I was trying to do, which was to make myself into this kind of person: someone worthy of praise, worthy of love.

Through most of the novel, Frances is occupied with the question of whether Nick loves her, but behind that question is her belief that she’s not worthy of love as she is.

Salvage the Bones, a novel by Jesmyn Ward, is set across the Atlantic in rural Mississippi, days before the devastation of Hurricane Katrina. The narrator, Esch, is fifteen, living with her father and her three brothers. Her mother has been dead for seven years. The mirror comes into her story in the first chapter, too.

I pulled my hair back in a ponytail. It was my one good thing, my odd thing, like a Doberman come out white: corkscrew curls, black, limp when wet but full as fistfuls of frayed rope when dry. Mama used to let me run around with it down, said it was some throwback trait, and since I got it, I might as well enjoy it. But I looked in the mirror and I knew the rest of me wasn’t so remarkable: wide nose, dark skin, Mama’s slim, short frame with all the curves folded in so that I looked square. I changed my shirt and listened to them talking outside. The walls, thin and uninsulated, peeling from each other at the seams, made me feel like Manny could see me before I even stepped outside.

Esch isn’t looking into the mirror in this scene. She has her mirror image memorized and refers back to it. Like Frances, she considers her reflection in the context of a man she’s about to see. In Esch’s case, he’s a boy she already loves and is having sex with—secretly, because he has a girlfriend he lives with.

I can’t count the number of times I’ve seen advice warning fiction writers to avoid scenes in which characters look into the mirror. The logic goes that it’s a lazy, contrived way of telling the reader what a character looks like, and that can be true. But Esch and Frances return to the mirror again and again. Their use of it evolves with plot, and sometimes advances it. They both observe their changing bodies in the mirror. For Esch, the changes are caused by a pregnancy she’s keeping secret.

I want to see how big I am, to see if you can tell. This is the only private mirror in the house. A big mirror with a fake gold-worked frame hangs in the living room, but I cannot do it there. I have to see myself as Skeetah, Randall, Junior, Daddy, and Manny do, have to see beyond my hands for eyes…

Privacy is hard to come by. She can’t perform the act of looking in the mirror in front of her brothers, father, or Manny, but she uses it to try to see herself as they do. In this scene, she concludes that her pregnancy is visible, and shortly afterwards, during sex, she tries to force Manny to see it, too. She’s always wanted him to see her, and to love her, but now it’s more urgent. “He will look at me” is her internal refrain. At first, the mirror keeps her secret, but before long she wants Manny to see what it has shown her.

Rooney and Ward don’t use mirrors to show us what their characters look like. In both of these novels, how they feel about their looks is much more important. Does he love me is the central question of the book for both narrators, and underneath that is the even larger question: Am I lovable? The question is not only about their relationships with their lovers, but also about their complex familial relationships. Both protagonists test their lovers, friends, and family members repeatedly to find out if they’re loved. They seek objective truth from their mirrors, often steeling themselves for the next test. The mirrors provide them with objective images, but that objectivity is lost because the characters must interpret what they see.

In Sylvia Plath’s poem, “Mirror,” which is narrated by the mirror, that’s the tragic joke. “I have no preconceptions,” the mirror claims in one line. “I am not cruel, only truthful,” in another. And yet, in the second, final stanza.

I see her back, and reflect it faithfully.
She rewards me with tears and an agitation of hands.
I am important to her. She comes and goes.

Both Esch and Frances do see truth in the mirror, even though it can’t be the objective image they seek, or the answer to the question of whether they’re loved. In the mirror, they face how they see themselves—both physically and wholly. They can’t separate how they look from who they are, and this truth is an essential part of their stories.